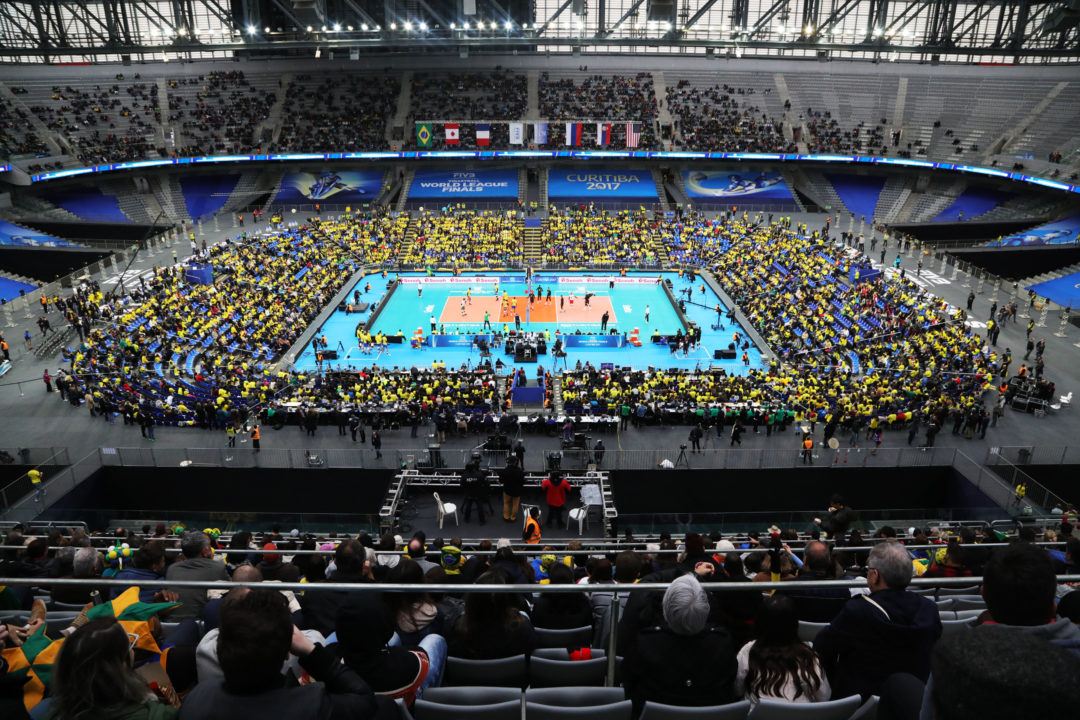 The month-long FIVB World League competition brought in some big numbers for their matches, while others didn't bring in much.  Current Photo via FIVB

The month-long FIVB World League competition brought in some big numbers for their matches, while others didn’t bring in much. From looking at the number of people attending which matches, the host country definitely played a role as to whether people showed up for the match or not, which makes sense.

At the finals in Curitiba, Brazil, a total of 107,720 fans showed up fo the event with 423,720 seats made available to the spectators. The Arena Da Baixada holds a total of 42,372 seats in its facility. The conditions in the arena, however, were not exactly ideal, as Brazil is in the middle of their winter, with the temperature reaching highs of around 54 degrees Fahrenheit – making for chilly temperatures inside the arena. Arena Da Baixada is primarily used as a soccer stadium, but the stadium was the first in South American to offer a retractable roof stadium. Even with the closed roof, the conditions inside were unfavorable.

The wintry conditions made for a chilly stay at the arena and could be a factor as to why not many people were attending the finals matches. The largest crowd drawn in was the finals match between France and Brazil with 23,149 fans. This is just over half of the stadium being filled.

In the preliminary round of the World League, Iran brought in the most consistent and largest crowd for their matches. Against Belgium, they had 11,000 fans in attendance and the number grew by 500 for each match after that at their Teheran matches. The final match in Iran packed the Azadi Sports Complex, which has a capacity of 12,000.

Though they brought in the most consistent crowd, they did not wrangle up the most in attendance during the preliminary rounds. A good-ole South American rivalry sparked the interest of the locals with 13,150 fans in attendance for the Argentina vs. Brazil match in Cordoba, Argentina. The match at the Orfeo Superdomo was nearly packed, as the facility holds up to 14,000 fans.

The only other consistently high-volumed crowds in the preliminary rounds were the ones held in Pesaro, Italy. The lowest attendance was the Brazil vs. Iran match with only 1,500 fans in attendance. The remainder pulled in a few thousand for each match at the Adriatic Arena, which can hold up to 10,323 fans.

Overall, slightly less than half of the seats that were made available to spectators of the preliminary rounds were filled with fans, as 242,600 fans showed up for matches, with 490,652 seats available.