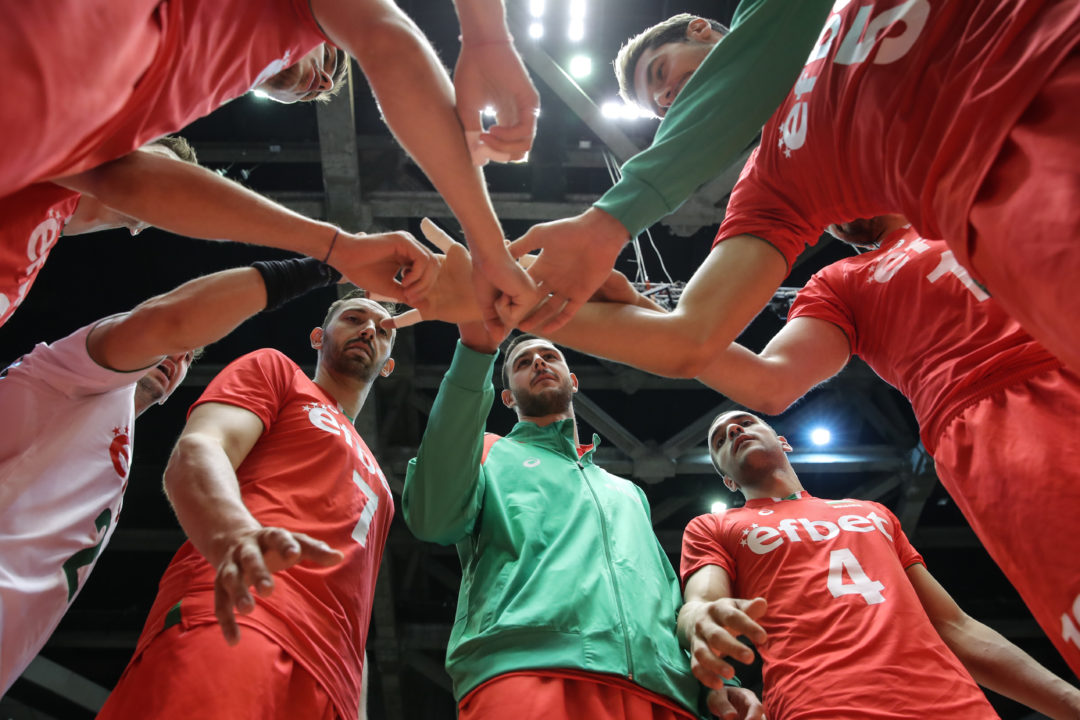 Rozalin Penchev and Valentin Bratoev turned in 21 points apiece to lead the way for Bulgaria in a final five-set victory. Thirty-one errors were too much for Germany to overcome against host Iran, which ended its three-match homestand with a five-set win.  Current Photo via FIVB

Rozalin Penchev and Valentin Bratoev turned in 21 points apiece with all around efforts to lead the way for Bulgaria in a final five-set victory in VNL play.

Bratoev led the offense with 17 kills to go with two blocks and two aces, while Penchev chimed in with 15 putaways to go with a team-best three blocks and three aces. Svetoslav Gotsev (12) and Nikolay Uchikov (10) also managed double-digit scoring efforts. Gotsev downed nine kills and put up a team-high three stuffs, while Uchikov added eight putaways and two blocks.

Jae-Duck Seo started just the final two sets, but came through with a team-leading 15 points for South Korea, tallying 14 kills and a block. Sung-Min Moon chipped in 15 points, all on kills, over the first three stanzas. Jiseok Jung (9), Kwang-In Jeon (7) and Kyumin Kim (6) rounded out the Korean effort. Kim put up a team-best three blocks.

Bulgaria committed 38 errors in the match (to 30 for Korea), but overcame that deficit with a 12-5 lead in blocks and 8-2 advantage in aces. Korea claimed a slight 57-56 edge in kills.

The Bulgarians could not get out of their own way in Set 1, committing several errors from the service line nullifying Uchikov’s offensive prowess. Moon led the way for Korea in a 25-19 win.

Penchev, Gotsev and Bratoev teamed up to counter Moon in Set 2 and lift Bulgaria to a 25-22 win.

Bulgaria cruised to a 25-18 victory in Set 3, overwhelming its foes with offensive power.

Seo led the way for Korea in a 4-0 run to give the team an 8-6 lead in Set 4. The teams were knotted at 19-all and Seo continued to shine, tallying nine points in the stanza as South Korea sent the match to tiebreak.

After giving up the first two points of Set 5, Bulgaria turned it on with a 6-0 run behind Bratoev. Despite leading 11-7 later in the set, the Bulgarians had to stave off one more Korean push before closing the door on a Bratoev putaway.

Bulgaria coach Plamen Konstantinov: “We finished with a victory, which was the positive part for us, though I am not satisfied with our overall performance. We lost our chance in the first match against Germany. We could have won two matches here in Tehran.

“Some of my players are injured and I could only rely on one player, which was really hard. I had to use my less experienced players who were in better shape and could help us in the future, but I need my experienced players in the World Championship. I think the tournament is tough and we did not have enough time to recover because we had to play three matches in a row.”

Korea coach Kim Hochul: “We are sad that we could only come up with one victory in our stint at the preliminary round of the Volleyball Nations League.”

Thirty-one errors were too much for Germany to overcome against host Iran, which ended its three-match homestand and VNL campaign with the five-set victory.

Iran bested Germany in kills (73-64) and had help from seven extra points on miscues (31-24) in the victory, while the Germans boasted an 11-4 advantage at the net in blocks. Both teams managed three aces.

Milad Ebadipour and Morteza Sharifi starred for the home side, turning in 23 and 22 points respectively with 22 kills apiece. Ebadipour also was one of three players to record an ace. Saber Kazemi added 15 points (14 kills, 1 ace), while Ali Shafiei (8) and setter Mir Marouflakrani (7) followed. Shafiei downed seven kills and added a block, while Marouflakrani accounted for four kills of his own to go with a team-best two blocks and an ace.

Simon Hirsch scored a match-high 25 points on 21 kills and a match-best four blocks for Germany. Christian Fromm and Moritz Reichert tacked on 18 and 15 points respectively. Fromm turned in 16 kills, a block and an ace, while Reichert added 12 putaways and three stuffs. Tobias Krick notched nine points (7 kills, 2 blocks) to round out the top group for the Germans.

After Germany rallied to force a decisive fifth set, Iran regained its form and built an 8-5 advantage in the tiebreak. Ebadipour and Kazemi played key roles in the giving the home side the lead. From there, the Iranians held off a German charge for the 15-11 win to close out VNL action in Tehran.

Iran was clearly in charge in a 25-20 Set 1 win, but Set 2 was much more nip and tuck. Reichert and Sharifi traded blows early and Hirsch gave Germany a brief lead just past the midpoint. The Iranians had help from an Ebadipour kick save down the stretch, but a net violation set up a final German run in a 25-23 win to level the match.

Iran rebounded with an 8-3 run to start Set 3 and managed to hold on despite several German rallies. Masoud Gholami gave the home side the 25-22 win and 2-1 lead.

Krick stepped up for Germany in Set 4 and Kazemi and Hirsch also chipped in offensively to keep the team on top. After a tie at 18, a crucial hitting error for Iran gave the Germans the advantage and momentum to grab a 25-22 win and force the final stanza.