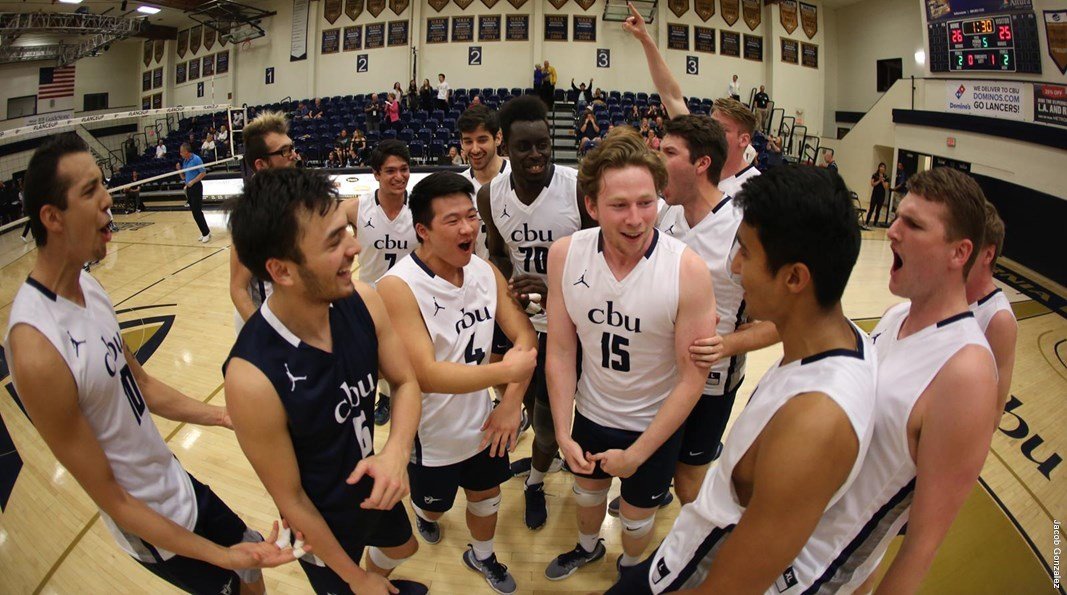 Lancers come back from 2-0 deficit and battle to 27-25 fifth-set victory. Current Photo via Cal Baptist Athletics

The fifth set featured 13 match-point attempts, eight for the Lancers and five for the Gauchos. Cal Baptist used an 8-2 run to turn an early deficit into a 9-6 advantage. UCSB scored four straight out of a timeout to go up 10-9, but Cal Baptist answered with a 5-2 run to earn its first shot at the match at 14-12. The Guachos staved off three match-point attempts, before earning one of their own at 17-16. The Lancers had more chances at 19-18, 20-19 and 21-20 but the match continued. UCSB had three opportunities to close it out at 22-21, 23-22, and 24-23. Three different players turned in kills and junior outside hitter Rohit Paul served up an ace to finally end the night.

UC Santa Barbara used a 5-0 run to go ahead 6-3 in Set 1 and never looked back. The Gauchos broke the game open with an 8-4 run, including kills by five different players and a trio from Sanders. UCSB ended the stanza by scoring six of the final eight points, including five on Cal Baptist miscues.

Set 2 featured 10 ties, last at 13-all, and saw UCSB outhit Cal Baptist .440 to .185. A block by Randy DeWeese and Chavers made it 15-13 Gauchos. A balanced offensive attack and two more stuffs led UCSB to a 24-19 lead. A Lancer service error gave UC Santa Barbara the 2-0 lead at intermission.

Cal Baptist turned the tables in Set 3, hitting .350 to UCSB’s .185 effort. The Lancers scored six of the first seven points of the set, with help from two blocks and three Gaucho miscues. UC Santa Barbara cut the margin to one at 9-8. The score remained close until a pair of Palos kills and two blocks helped turn a 17-15 lead into a 24-17 advantage.  A service error ended the set at 25-19 to extend the match.  UCSB hit .023 in the set, posting 13 kills and 12 errors.

After a tie at 6-all, Cal Baptist took control of Set 4. A kill and an ace by Jackson Buerge put the Lancers up four at 12-8. The Gauchos fought back to within one seven times, last at 21-20, but could not break through. A block and three straight hitting errors evened the match, sending it to a decisive fifth set. UCSB hit .023 in Set 4, posting 13 kills and 12 errors.

Full video from the match is here.

It was the second longest match in Mountain Pacific Sports Federation history, improving the Lancers to 7-18 overall and 2-13 in conference. The Gauchos drop to 10-13 on the year, 5-10 in the MPSF.

“I have to give credit to both teams,” said head coach Derek Schmitt. “We knew we could compete with this team. I’ve never been a part of a game that went this long in the fifth set.”

Several Lancers finished the match with double-digit kills: Kevin Vaz with 16, Luis Palos with 11 and Rohit Paul with 10. Enrique de Diego Garcia contributed six kills, while Jackson Burge and Caleb Miller finished with five each. Even libero Emmet Enriques got in on the scoring action and finished with one important kill in the fifth. He also added seven digs, while Cody Jackson finished with a team-high 15 digs. At the net, Miller and Vaz finished with eight and seven blocks, respectively, helping the Lancers out-block the Gauchos 15-to-10.

“Nobody got down on themselves,” said Enriques. “Everybody gave 100 percent. We had a lot of control and were able to set whoever we wanted.” After two dominant sets from UCSB, the Lancers began to find their groove late in the second chasing the comeback after being down by nine. Despite the second-set loss, 25-20, CBU exploded into a 4-0 run to force a Gaucho timeout to start the third. Momentum remained high for the Lancers as UCSB errors added fuel to kills from Vaz, Miller and Palos to put CBU within one set, 2-1, heading into the fourth. Late in the set, UCSB came within one point of the lead, 15-14, but the Lancer offense ran away with the set to force a fifth set, hoping to complete the epic comeback.  The Lancers then had to come from behind once again, down 4-1 in the frame, to go into extra points – the set was tied 15 times – before Paul finally sealed the deal with an ace. CBU looks to carry its four-match winning streak momentum into Saturday’s MPSF match against No. 6-ranked UCLA at 7 p.m.

RIVERSIDE, Calif. – In their first match coming off their bye week, the No. 15 UC Santa Barbara men’s volleyball team dropped a five-set heartbreaker to Cal Baptist featuring the second-longest fifth set in MPSF history, with the Lancers eventually pulling out a 27-25 win.

A trio of Lancer hitters reached double-digit kills, led by Kevin Vaz’s 16. Vaz also had a team-best seven blocks, while Cody Jackson solidified the back row with 15 digs.

UCSB stormed out to a 2-0 lead in the match thanks to a .545 team hitting percentage in the first two sets.

The Gauchos were at their best in the opening set, with Sanders torching the Lancers for five kills on six swings as UCSB hit a blistering .684. Sophomore middle Connor Drake added three kills on three swings in the frame, and he was a driving force for the Gauchos in game two, notching four kills on five swings. Delson started to get into a groove in the second set, hammering down five swings.

Cal Baptist turned it around in sets three and four thanks to a prolific performance from their middle corps, with the home team notching seven blocks in the fourth. That all set up a do-or-die fifth that ended up needing the sceond-most points in conference history.

CBU had a golden opportunity to win the set early, having a pair of match points at 14-12, but a bad serve from Jackson followed by a huge ace from DeWeese tied it up, serving as a preview of the struggle to come the rest of the way.

The teams traded points for the next 15 minutes, with UCSB creating five match points to Cal Baptist’s six.

The Gauchos’ last chance to pull it out came at 24-23, but the Lancers stormed back with a 3-1 run to set up a match point of their own, converting this time on an ace from Rohit Paul.

UCSB plays its last road match of the regular season tomorrow evening with a 7:00 p.m. contest against USC that has huge playoff implications for both squads.