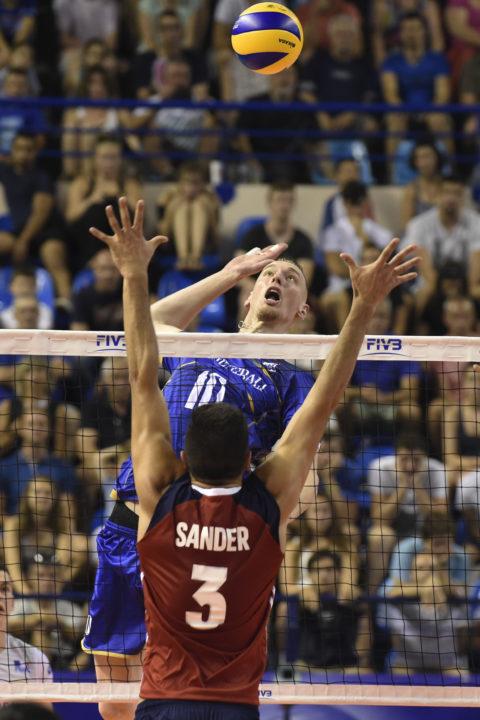 France's Kevin Le Roux is iffy for play this weekend after an ankle sprain in the team's win against the United States. Current Photo via FIVB

France’s Kevin Le Roux is is available play this weekend after an ankle sprain in the team’s win against the United States.

According to and French national team communication’s liaison, Le Roux twisted his ankle a little bit and should be available for the third week of play in Antwerp, Belgium. The spokesperson, however, could not confirm that he will play, as that decision is up to the coaches.

The injury occurred after two sets of play, with Le Roux contributing two kills and an ace for the French team. So far in the tournament, Le Roux has accumulated 48 points with 25 kills, 14 blocks and nine aces, ranking 36th overall in Group 1. Le Roux is a steady middle blocker for the French team, coming in with much-needed kills and blocks.

The French squad is the first to qualify for the Final 6 after the second week of play in Arena de Baixada, Curitiba, Brazil that will begin in early June. Le Roux has helped the French team to a perfect 6-0 in the tournament, with all six of their wins coming by either a 3-0 or 3-1 score.

With Le Roux up in the air for the week three matches, the team is welcoming back Earvin N’Gapeth, a huge contributor to the team. The return of N’Gapeth will be a boost for the team, in addition to the standout play that Stephen Boyer has contributed in his absence, taking the point’s lead in Group 1.

Recently, Le Roux, who is a middle blocker for the French national team, has signed a two-year contract with Dinamo Moscow as a right side attacker, a position he has not played since the 2014-15 season in the Korean League. With Azimut Modena, Le Roux produced a 52 percent attack average from the middle.