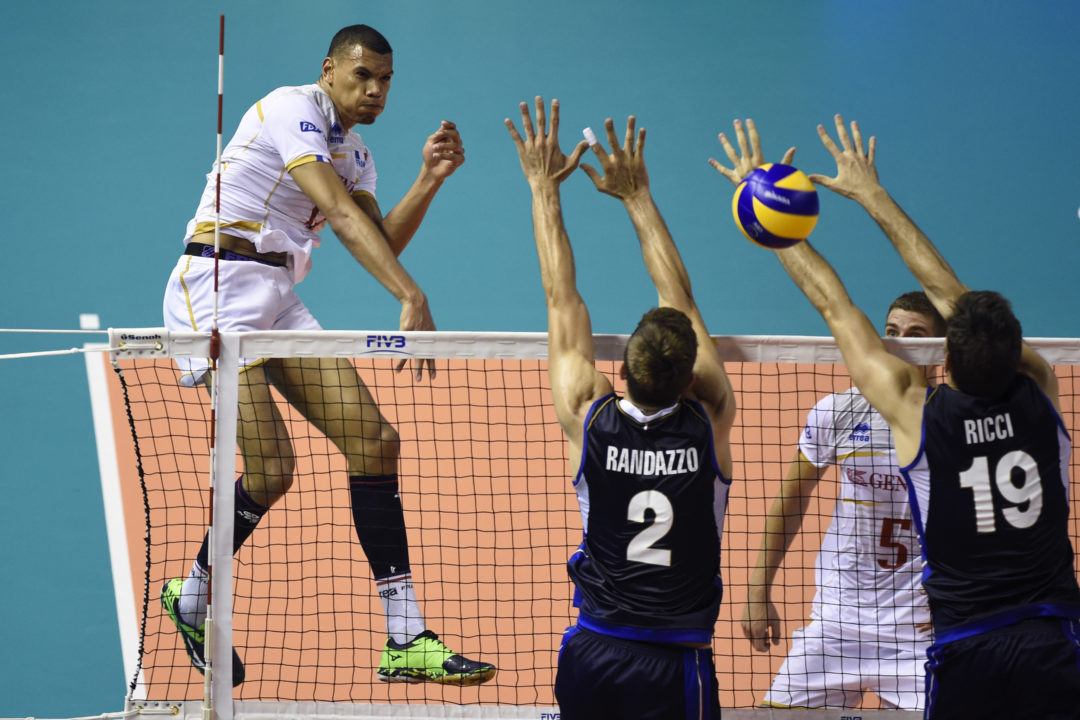 Stephen Boyer (left) emerged as a force for France for the first two rounds, leading Group 1 with 106 points in 6 matches. Current Photo via FIVB

“France can go anywhere,” says French star Julien Lyneel, the only French player besides group-scoring leader Stephen Boyer to lead the team in points in a match in the 2017 FIVB World League.

And that anywhere, apparently, includes the Arena da Baixada, Curitiba, Brazil for the Final 6 as France on Sunday became the first team to qualify through for the hexagonal championship round. They will join hosts and automatic advancers Brazil in the two three-team pools that begin play in early July to determine the four teams that advance to the semi-finals and eventually on to one final championship match in front of a crowd that should measure north of 40,000 spectators on July 8th.

France is now 6-0 in the tournament, with all 6 of their wins coming by either a 3-0 or 3-1 score. While they can still be caught for the number one overall seed, there aren’t enough teams left that can catch them in both wins and points (the first tie breaker) to knock them out of the 5 teams that qualify through to the Final 6.

France’s full results from the tournament:

Boyer, a 21-year old 196cm (6’5″) tall outside hitter, has emerged as an offensive force in the absence of superstar Earvin Ngapeth,. who is not on this year’s World League roster. Boyer, from the small French department of Reunion off the coast of Madagascar, was not on last year’s French roster at the Olympic Games, and is now the Group 1 leader in scoring with 106 points through 6 matches (17.6/match). Boyer plays his club volleyball for the French champions Chaumont, where he was the 6th-rated outside in the Pro A league last season. He scored at a similar pace (18 points/game) in the French domestic league regular season as he’s done in this year’s World League.

“Now we are qualified,” said French coach Laurent Tillies. “It’s amazing because it is the third participation in three years! Earvin Ngapeth comes back with us for Antwerp even if he’s still recovering. But we need to prepare him for Curitiba.”