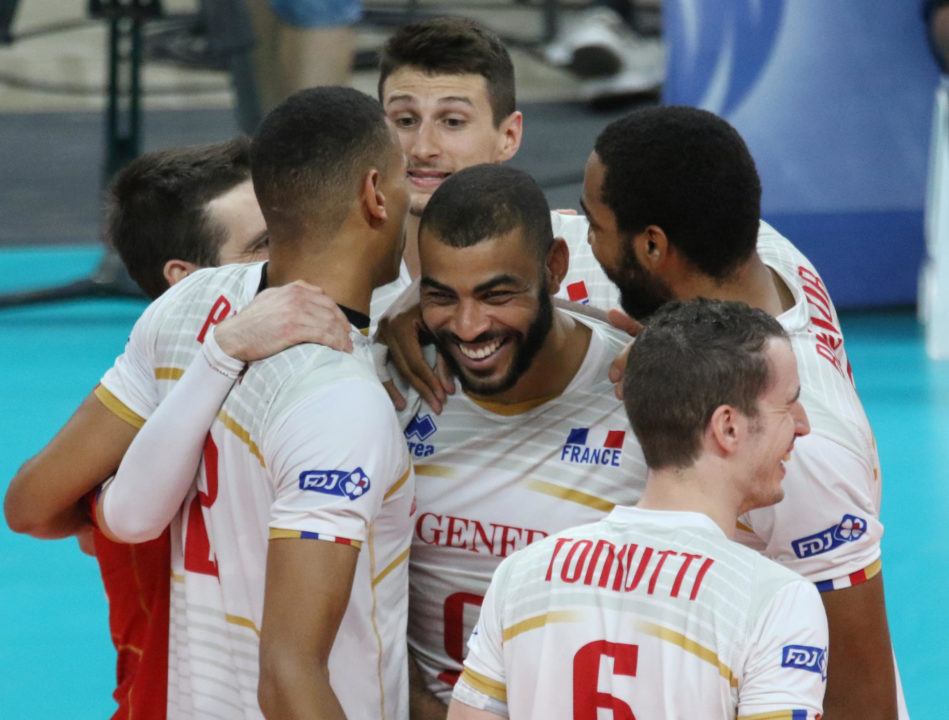 One of France's brightest stars, Earvin Ngapeth (middle), made his 2017 World League debut on Sunday. Current Photo via FIVB

After a 3-0 defeat of Canada on Saturday secured the top seed for France in the Final 6, they finally took a flier on chemistry on Sunday in their final match, against Belgium.

The team didn’t necessarily expect to be as good as they’ve been so far in the World League, playing Week 3 without the injured Kevin Le Roux, the first two weeks without Earvin Ngapeth, and as they seek to find their way after opposite/outside hitter Antonin Rouzier retired from international volleyball – he was named the best outside hitter of last year’s World League tournament.

Stephen Boyer has emerged as one of the stars of this tournament so far. After not even making the French Olympic team last summer, he’s the runaway points leader of Group 1.

On Sunday, though, he at times gave way to the more established Earvin Ngapeth, who made his first appearances of the tournament as a substitute in all 3 matches, and made an immediate impact. Ngapeth has been finishing his final rehab from an injury from the professional season with Italian side Modena, but the French coach thought that it was important to get him worked back into the system before the Final 6 begins.

In his summer debut, he had 5 points, 3 straight aces in the 3rd set as France dominated Belgium 3-0 in Antwerp.

“I am very satisfied about this tournament,” said French coach Laurent Tillie. “The whole team is tired. Still we managed to win this group and qualify for the Final 6. That is why I give time for several players, like today with Earvin Ngapeth. Normally he could only play in service and reception, it was forbidden for him to spike. I am very satisfied, now we have one week rest and one week working again before the Final 6.”

Boyer, for his part, still racked up 14 points to seal the scoring title for the Intercontinental Round of play.

Watch his first huge point back below: