Iran Rallies for 5-Set Win, Poland Hangs on In 4 in Pool D Finale 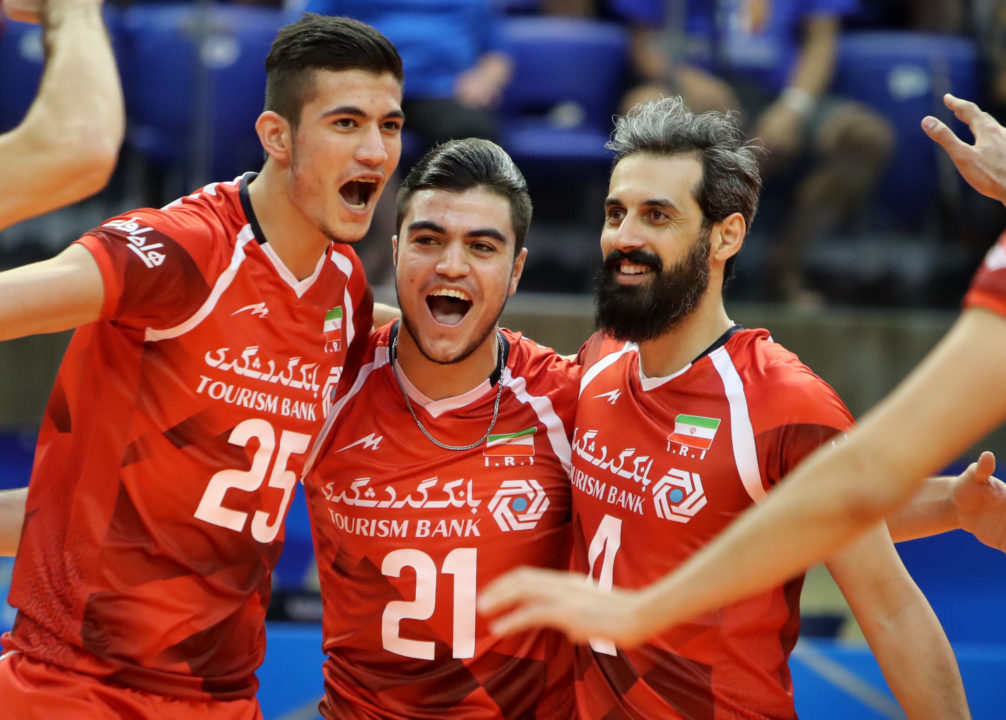 Iran nailed down its spot as the No. 2 team coming out of Pool D with a five-set comeback win over Finland. Meanwhile Poland snatched up its fifth-straight win, topping Bulgaria in four sets. Current Photo via FIVB

Iran nailed down its spot as the No. 2 team coming out of Pool D with a five-set comeback win over Finland. Meanwhile Poland snatched up its fifth-straight win, topping Bulgaria in four sets.

The results simply solidified poll position in the group as all four teams were already through to the second round.

Poland will now remain in Varna to play in Pool H in the second round, while Bulgaria head to Sofia, Italy, for Pool G play with Iran, the USA and Canada.

Finland will ship off to Milan for Round 2.

“It was a dramatic and nervous game because everybody expected us to win,” Iranian coach Igor Kolakovic said. “It was difficult to get an easy victory against Finland. They played very well in defense and reception. They also showed some really great attacking actions through the middle. I am happy because some of our young players proved that they can play at such a high level. I am sorry for loosing a point but we were close to the defeat so it is the best possible end.”

In a match decided by just a handful of points, it was a 7-2 advantage from the service line that gave Iran the advantage in the comeback win.

In addition to the ace lead, the Iranians boasted a 13-12 edge in blocks and had help from two extra points off miscues (31-29). Both teams managed 60 kills.

Five Iranian players turned in double-digit point tallies, led by Milad Ebadipour‘s 18 (16 kills, 1 block, 1 ace). Morteza Sharifi chipped in 16 points on 12 kills, three blocks and an ace, despite missing the first set and playing as a substitute in Set 2. Ali Shafiei (15), Amir Ghafour (10) and Amir Hossein Toukhteh (10) followed. Toukhteh put up at a team-best four blocks in his first start of the tournament, while Ghafour served up two aces. Saman Faezi took over for Toukhteh in Set 5.

Niko Suihkonen notched a match-high 19 points (16 kills, 3 blocks) despite not starting the match. Samuli Kaislasalo made an impact late, racking up 16 points (16 kills, 1 block) despite playing in just the final three stanzas. Tommi Siirila added 13 points on eight kills, a team-leading four blocks and one of the team’s two aces. Antti Makinen and Urpo Sivulo left the match after three sets with Kaislasalo and Elviss Krastins taking their places in the starting lineup.

The Iranians boasted a 20-19 edge in Set 2 only to see it slip away behind a 6-2 final push for Finland evened the match.

Set 3 was a real battle as neither team led by more than three and the lead changed hands 11 times. Finland was the first to the finish line earning two set point tries. A net touch sealed the win at 25-23.

After closing out Set 4 with a late run, the Iranians carried the momentum into Set 5, cruising to a 6-2 lead and hanging on for the 15-12 win.

“Today we were fighting for every ball,” Finnish coach Tuomas Sammelvuo said. “We missed our chance. The whole tournament brings our young players a lot of experience. We are proud of reaching the next round and this is a big achievement for us despite the tender age of the team. We had our noisy crowd again. We thank them for supporting us in any cases.”

Bartosz Kurek downed a match-high 16 kills and added three aces and two blocks to guide Poland with 21 points as the team bested Bulgaria in every way.

Just one player, Valentin Bratoev managed a double-digit point tally for the Bulgarian, turning in 19 points on 16 kills, two blocks and an ace. Nikolay Uchikov and Todor Skrimov added eight points apiece, all on kills, but were not factors in the final set as Nikolay Nikolov and Nikolay Penchev took over as starters. Skrimov was making his return after suffering an injured calf against Iran. Twelve players saw action in the match.

Poland crushed the Bulgarians in Set 1, jumping ahead by eight points en route to a 25-14 win capped by solo stuffs by Szalpuk and Kurek.

In Set 2, Bulgaria turned the tables with an efficient hitting effort, including a 4-for-4 effort by Batoev and a 6-for-7 performance by Skrimov in a 25-23 Set 2 win.

The Poles turned a two-point lead into a 16-9 advantage midway through Set 2. Bulgaria made a run at them, pulling within two at 22-20, but a trio of errors gave Poland the 25-22 victory.

The teams were level at 16 in Set 4 before Bulgaria went up 23-22. Bravoev boggled a serve and Kubiak swooped in to grab Poland the win with a block and a kill.