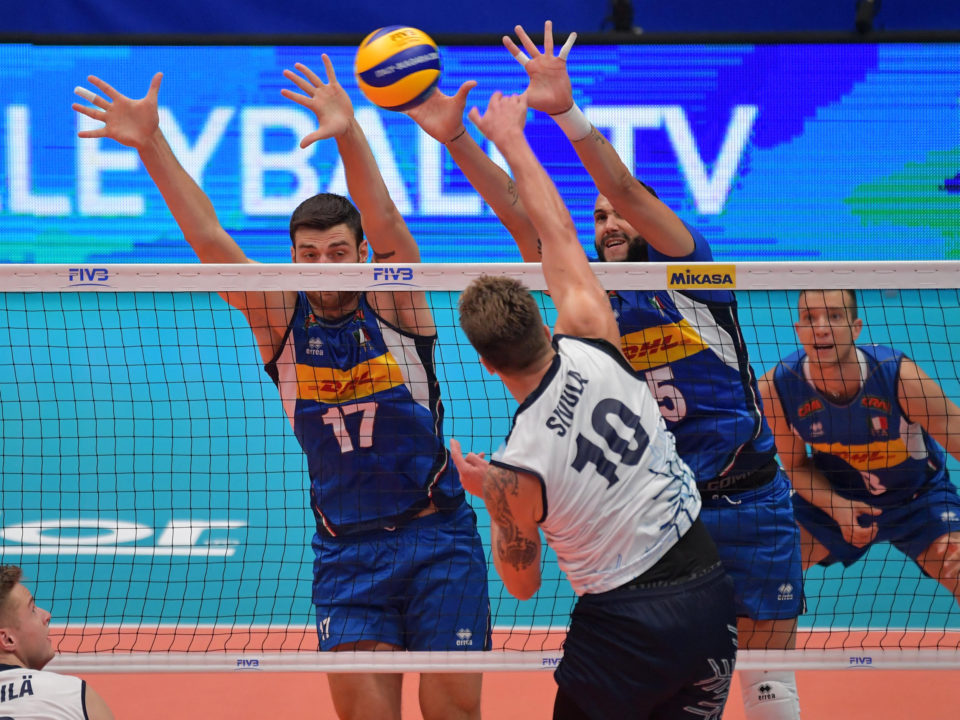 Russia cruised past the Dutch, while Italy made quick work of Finland to begin Pool E action in Round 2 of the FIVB Men’s World Championships.

“We are satisfied with this victory but we know that we can do more,” Russian coach Sergei Shliapnikov said. “Tomorrow it will be a tough game since Italy play at home, and they are supported by their home crowd but, but we want to win and will do whatever possible to continue our journey in this World Championship.”

Four Russian players posted double-digit scoring efforts and the team bested the Dutch in every way in the sweep.

Outside hitter Dmitry Volkov notched 15 points, including eight in the opening set, while opposite Maxim Mikhailov (13), outside Egor Kliuka (11) and middle blocker Ilyas Kurkaev (10) followed. Volkov, Mikhailov and Kliuka downed nine kills apiece, while Volkov and Kurkaev were tops on the blocks with three stuffs each. Mikhailov also served up a match-leading four aces, while Volkov chipped in three perfect serves.

Outside Thijs Ter Horst was the only Dutch player to reach double-digits, turning in a 13-point effort, including seven in the final stanza. Ter Horst notched a match-high 10 kills and three blocks. Captain Nimir Abdel-Aziz was next on the team with nine points, seven in Set 3, managing seven putaways and two aces.  Nimir did not play in the second set as 10 different Dutch players took the court in the stanza. All 14 players saw action for the Netherlands in the match.

Russia grabbed ahead 12-8 and turned away any Dutch comeback attempts in a 25-17 Set 1 win.

The Russians built a six-point lead at 18-12 in Set 2 and continued on to a 25-16 victory behind Volkov and Mikhailov.

“If we wanted to win with Russia we needed to do everything perfectly and hope that they were not in a perfect shape,” Nimir said. “Tonight we did not play at our best.  They always put us under pressure, and we suffered a lot. Tomorrow we will try to do better, but we need to limit our errors.”

Eleven blocks helped lift Italy past Finland and to its sixth straight win of the World Championships.

Osmany Juantorena and Ivan Zaytsev notched 14 points apiece to pace the Italians to victory, while three other players chimed in with eight or more points.