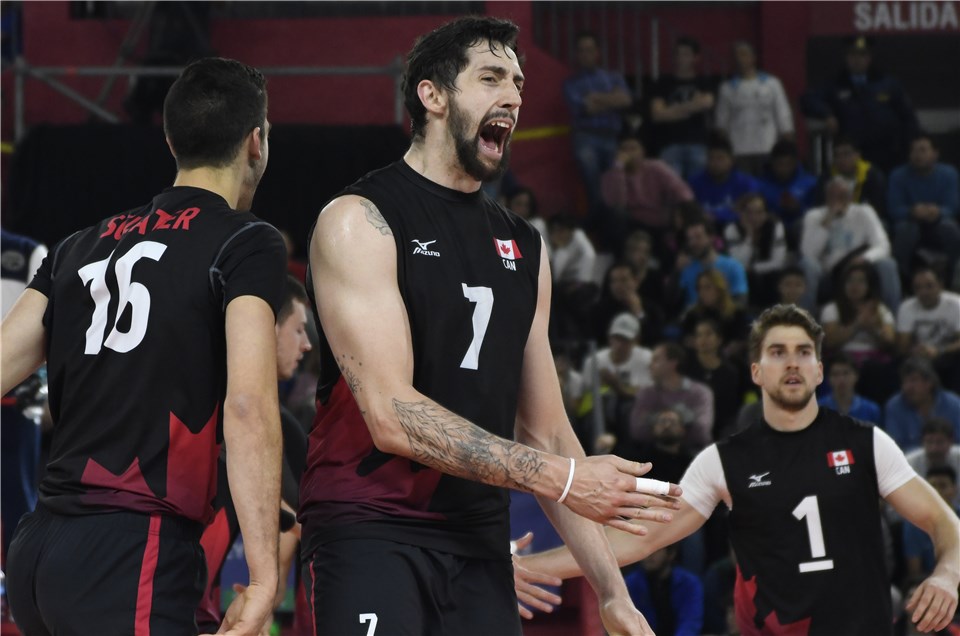 Italy bested Iran in kills and aces, while Ivan Zaytsev notched a match-high 16 points, in a sweep. Canada put up 12 blocks and benefitted from 31 Argentine miscues in a four-set win on Saturday. Current Photo via FIVB

Italy bested Iran in kills and aces, while Ivan Zaytsev notched a match-high 16 points, in a sweep.

The Italians overcame 25 errors by boasting a 40-31 advantage in kills and a 6-1 lead in aces. Iran edged Italy in blocks (6-5) and committed just 16 errors.

Zaytsev downed 15 kills and added a block, while Osmany Juantorena returned to form, shaking off a previously reported elbow injury, to rack up 11 points, all on putaways. Simone Giannelli tallied seven points, including a team-leading three aces.

Set 1 was a back and forth affair even until the final moments. It was a one-point game at 24-23, but Iran hung on for the victory, winning on a Eraghi miscue.

Italy built a six-point lead in Set 2 (20-14) including an ace by Luigi Randazzo and a stuff by Simone Anzani, and cruised to the 25-18 win.

Set 3 saw Italy take control early and despite an Iranian rally which cut the margin to two at 16-14. Zaytsev came through in the clutch, pushing the margin back to four and putting the match out of reach.

Italy player Osmany Juantorena: “It was a very hard match for us. We served really bad and couldn’t find our rhythm yesterday. It was easier today because we served better and had a good side-out. We committed less mistakes and played better. We are very happy. Tomorrow we have an important match against Argentina. Since they are playing at home, we need to keep our focus and play our game.”

Iran coach Igor Kolakovic: “We had the opportunity to play against one of the best teams in the world tonight. Maybe we could have played better but the team looked tired. We cam from a long match against Argentina but I am happy because the younger players had the chance to play against stars. They deserved to play and showed quality. They made a great effort, which is positive for us.”

Canada put up 12 blocks and benefitted from 31 Argentine miscues in a four-set win on Saturday.

The errors were too much for Argentina to overcome, despite the fact that the team bested Canada in kills (61-50) and aces (4-2). The Canadians made up the difference with a 12-7 advantage in blocks and 12 extra points on miscues (31-19).

It was a spirited match, including a confrontation across the net between Marr and Conte in Set 3.

In the end, it was Marr’s side that came away victorious, issuing Argentina its fifth straight loss.

The Canadians erased a 6-2 deficit in Set 2 thanks to Argentina’s inconsistency, and Sclater closed out the win at 25-18.

The confrontation between Marr and Conte came as the teams were tied at 10-all in Set 3. Canada looked like they would roll on to a sweep, but down 23-20, Conte turned it on with two kills and Loser converted on the team’s first set-point try at 26-24.

Argentina fought til the end in Set 4, turning a 23-19 deficit into a tie at 23 with Maximiliano Savanna at the end line. The comeback was not to be, however, as a miscue spelled the end of the night at 25-23.