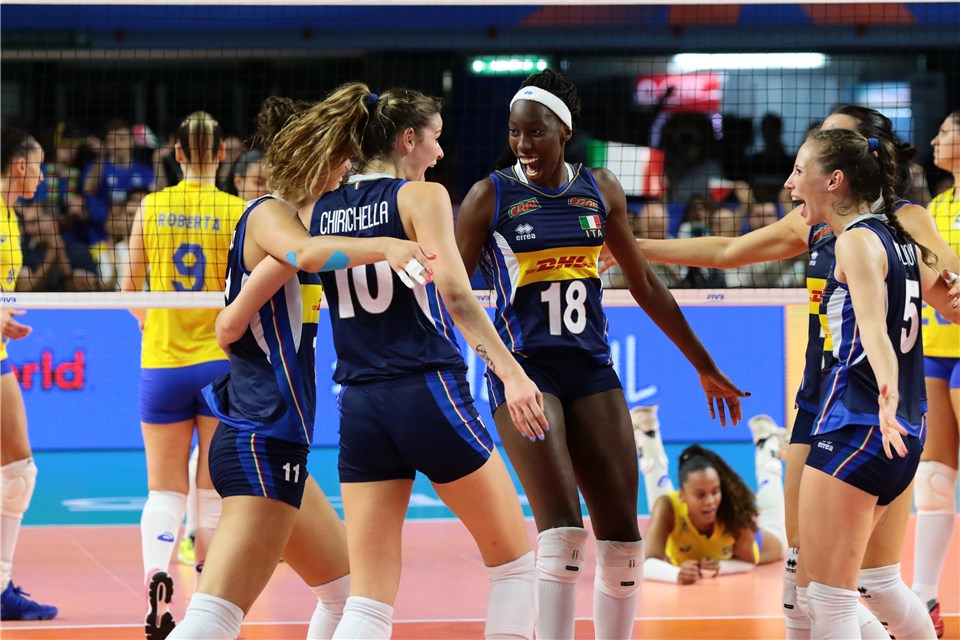 Britt Herbots scored a team-best 23 points as Belgium wrapped up VNL play with a victory over Thailand. Although the Final Six was mathematically out of reach, Italy did not hold back in its final match of the VNL, besting Brazil in five sets to end the tournament on an eight-match win streak. Current Photo via FIVB

Britt Herbots scored a team-best 23 points as Belgium wrapped up VNL play with a victory over Thailand.

Herbots turned in an all-around effort with a team-best 18 kills, three aces and two blocks. Kaja Grobelna also added 18 kills, part of a 19-point tally, while Celine VanGestel chipped in 16 points, all on putaways. Marlies Janssens rounded out the group of top scorers with 16 points, including a team-best five blocks and four aces to go with seven kills.

Chatchu-On Moksri paced Thailand with 20 points on 16 kills, three aces and a block, while Ajcharaporn Kongyot added 17 points, with 14 kills, two blocks and an ace. Eight other players added at least one point in the loss. Onuma Sittirak, Hattaya Bamrungsuk and Wilavan Apinyapong followed with seven, five and five putaways each.

Thailand earned the first set point try of the match at 24-23 in the first stanza, but a kill by Grobelna and an ace by Janssens turned the tables and put Belgium on the hill at 25-24. Van Gestel sealed the comeback with a putaway to finish off the set.

The Thai again were the first to the brink in Set 2. A Janssens overpass kill stopped the first of five set-point tries, but could not keep Thailand from securing the 25-23 victory.

After a 25-20 Set 3 win, Belgium found itself down early in Set 4, but worked its way into a tie at 7. Janssens then went on a scoring run from the end line, including two aces to put Belgium up five. Grobelna came through in the end to finish off the 25-21 win and the match.

Although the Final Six was mathematically out of reach, Italy did not hold back in its final match of the VNL, besting Brazil in five sets to end the tournament on an eight-match win streak.

After sitting on the sidelines for much of the last two matches, Serena Ortolani stepped into the spotlight for Italy, racking up a match-high 20 points on 16 kills, three aces and a block. Paola Egonu started just the final two sets, but that did not stop the youngster from piling up 17 points on 13 putaways, three blocks and an ace. Anna Danesi (16) and Cristina Chirichella (13) also managed double-digit scoring totals. Danesi was a force at the net with a team-best seven blocks and from the service line with a match-high four aces, while also chiming in with five kills. Chirichella poured in eight kills, three blocks and two aces. Lucia Bosetti was not far behind with nine points, all on putaways.

After dropping Set 1 25-22, Italy found itself facing an 11-7 deficit in Set 2 when everything changed. The team kicked off a 10-2 run to turn the tables behind two Chirichella aces, two blocks by Danesi and two kills, a block and an ace by Egonu. Ortolani served up an ace to finish the comeback.

With its back against the wall again in Set 4, Italy jumped ahead by four early on and held Brazil at bay down the stretch. It was just a one-point game at 13-12, when Ortolani seized control. The 31-year old dropped a kill down the front of the block to set up match point, then provided a stuff of her own to finish off the upset.