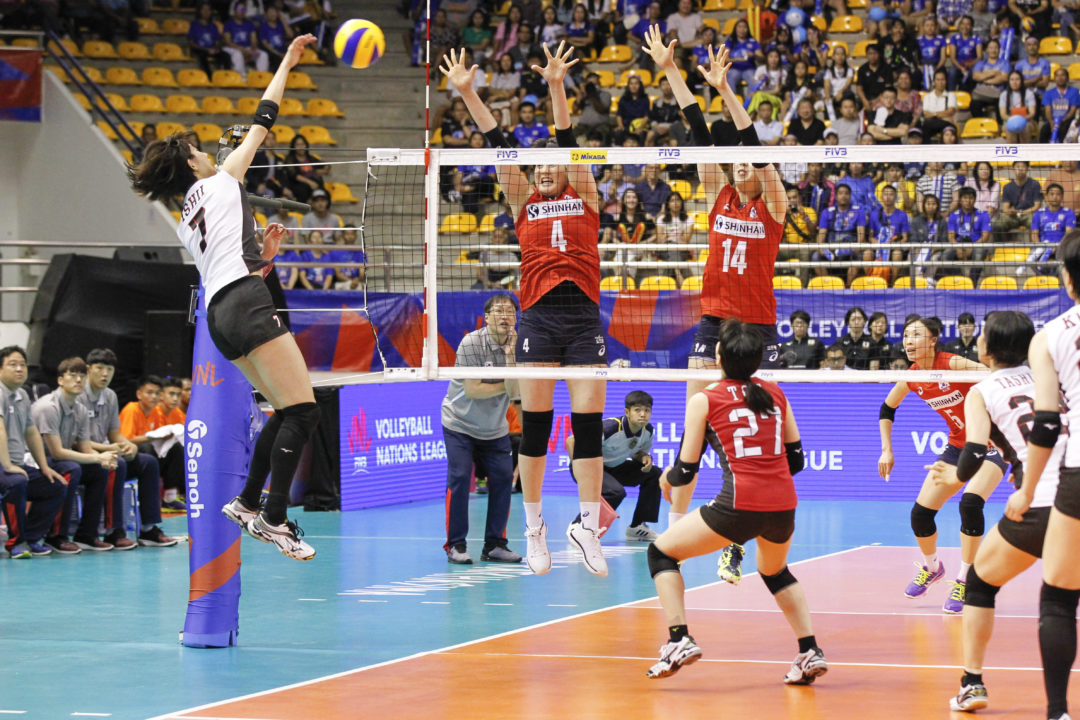 A strong service game and dominant hitting effort led by Yuki Ishii pushed Japan past South Korea on Wednesday, while an all-around team effort and four double-digit scorers lifted Turkey to a four-set win over Thailand. Current Photo via FIVB

A strong service game and dominant hitting effort led by Yuki Ishii pushed Japan past South Korea on Wednesday, snapping a three-match skid for the Japanese.

The Japanese outserved Korea 6-1 and boasted a 10 kill advantage (36-26) in the victory. South Korea outblocked Japan 8-5.

After a messy first set, Japan showed its dominance in Set 2, rolling out to an 8-2 lead. Ishii and Shinnabe teamed up to lead the squad to a 25-14 win.

Yeon Koung tried to rally her troops in Set 3, but Japan held on for a 25-20 victory and the match.

Japan coach Kumi Nakada: “I was very satisfied  with my team’s performance today. I am quite happy to see that my players could change their mindset from yesterday’s loss.  Korea are a very strong and tall team, so we had to play more aggressively. Tomorrow, we will play against the host team Thailand who are a very skilled team, but we will keep challenging ourselves and try to do our best.”

Korea captain Kim Yeon Koung: “Today our game was not really good and our opponents played really well. Personally, my reception was not stable and I sometimes shaked mentally. So next match I want to recover from my mistakes and have a really good game.”

An all-around team effort and four double-digit scorers lifted Turkey to a four-set win over Thailand, keeping the team among the VNL Top 5.

Chatchu-On Moksri and Pleumjit Thinkaow paced Thailand with 16 and 15 points respectively. Each turned in 13 kills, while Moksri put up three blocks and Thinkaow added two. Watchareeya Nunajam was next on the team with five points (2 aces, 2 bocks, 1 ace), while Pimpichaya Kokram managed five points, all on kills, in the first two sets. Hattaya Bamrungsuk played in just the fourth set as a substitute.

Turkey cruised to an 8-2 advantage in Set 1 and held off several Thai charges for a 25-20 win.

Gunes starred from the service line and Erdem provided the offense to give Turkey the edge in Set 2, but Thailand chipped away and earned their first lead of the match at 20-19. Down 24-23, Gunes came through with a kill to knot the score. A Baladin putaway gave Turkey its first set point try, but it would take three more attempts to close out the 30-28 victory.

Thailand turned the tables in Set 3, cruising to a 17-13 lead with help from Turkish miscues. A stuff by Malika Kanthong gave the Thai the 25-18 win.

Turkey returned to form in Set 4, jumping ahead 6-1, but Thailand rallied to go up 10-9. Gunes took over with strong serving and eventually capped the win with a block.

Turkey captain Eda Erdem Dundar: “Today’s game was really tough for us because Thailand, I believe, are one of the most difficult teams in the world. Their side-out attacks are really good and today we struggled to block them in every position. In the first two sets, we served well and did good attacks but in the third set we lost our rhythm and we couldn’t defend well. In the fourth set, we fought really well as a team, believed in ourselves, and eventually won the game. But of course, congratulations to the Thai team. They are great!”

Thailand coach Danai Sriwacharamaytakul: “I think it was a good match for us today. Turkey did their homework well before playing against us. They served very well with powerful attacks in the first set which made it hard for us to defend. But we were able to play our own game, our combination plays in the second and third sets with which we scored many points. But in the fourth set they put pressure on us with their effective serving and they improved their defense and blocking. I hope my young players will gain good experience from today’s match. I am glad that some of our players were able to play with their own form today. We will try to make more efforts and reduce easy mistakes when we play against Japan tomorrow.”