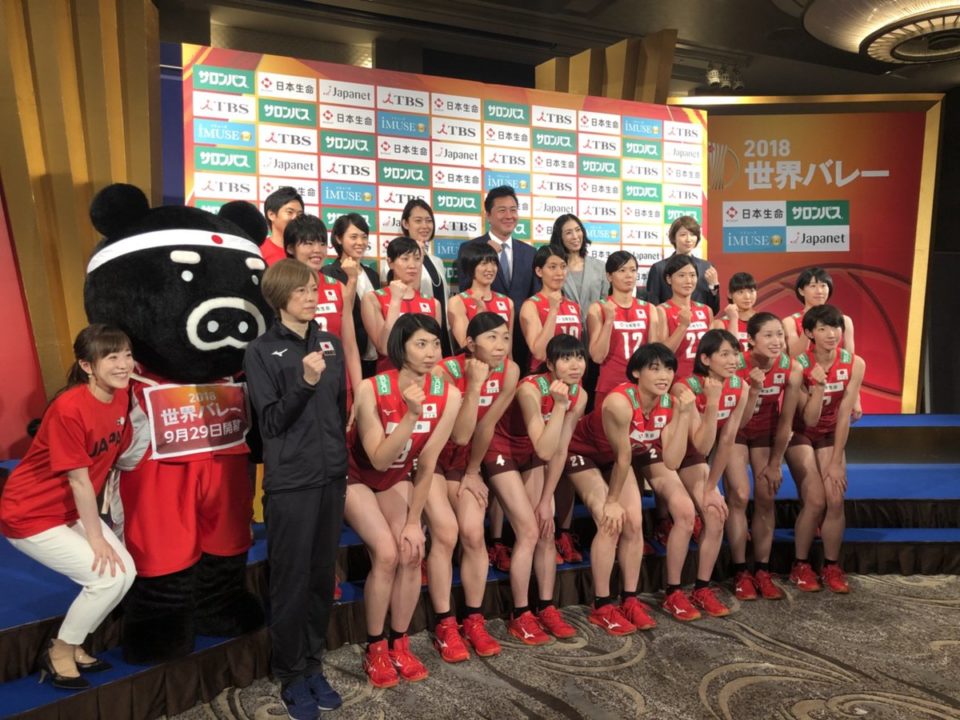 On Monday, September 3rd, the Japanese Volleyball Association (JVA) with their broadcasting partner Tokyo Broadcasting System (TBS) had a press conference for the 2018 FIVB Volleyball Women’s World Championship. With Japan hosting the tournament for the fifth time, first since 2010, TBS is really starting to promote the tournament in September to the Japanese public. The 2010 tournament in which Japan lost a memorable semifinal to Brazil (leading 2-0 before losing in five), drawing an average of 21.6% of the Japanese TV viewing audience for the match. Japan finished 3rd for the their first medal in 32 years after defeating the USA in five sets, which also drew an average of 20.5% for that match as well. For the 2010 version of the tournament for an average Japanese match had 14.9% of the country watching.

For volleyball as a whole, if the Japanese public are interested, more money from Japanese broadcasters and businesses will flow into the sport internationally through sponsorships and extended broadcast contracts.

At the press conference, Japanese women’s national team coach Kumi Nakada announced the 15 players that will compete from September 29 to October 20. Nakada stated when she accepted the national team position in 2016 that she wanted to have a team that would leave their mark in history. Captain Nana Iwasaka said that the team’s goal was to medal. Nakada has mentioned in some of the preview videos from TBS that Japan must win all five matches in the first round to have a chance to medal. With the Netherlands is Pool A with Japan, that will be a difficult task to sweep their first round matches. Additionally, in the second round Japan will face Brazil and Serbia. With only the top 3 teams advancing to the third round from the second round pools, it will be a difficult path for Japan if they lose to the Netherlands.

Here is the roster (pictured above):

The first thing from the line that scares me is three setters. I know that Tashiro can play defense and serve, in addition to having played on the national team previously. However, in the daily roster one of those players will not be playing. Tominaga will be the starting setter Japan.

For the middle blockers, that is probably the best lineup of four, with Iwasaka and Araki being the preferred starters.

At outside hitter, Ishii, Shinnabe and Kurogo are probably the starters. Shinnabe can play a serve receiving opposite when needed if Nagaoka is having some issues. Koga is not as good on serve receive as Ishii or Shinnabe, but probably a better spiker than Shinnabe. Nabeya will be the serving substitute in the back row and a defensive spark plug for Japan if they fall behind. Kurogo will probably be the focus of the media attention, but the stage may be to big for her at this young age (20). Nagaoka is back after the Asian Games, which was a good warm up tournament for her in general. Will play a big part in Japan’s success or failure.

Inoue and Kobata have been the starting liberos for most of the last two years for the national team, so it does not surprise me to see that they were chosen.

With less than one month to go, the Japanese women are looking to write their own history over the next two months and even two years (leading to Tokyo 2020).

There`s 15 players on this roster. Only 14 can make it

This is the final roster. Yes, there probably will be a final cut to get to 14. If the Japanese Volleyball Association is basically putting everyone on the stage with the official broadcaster. If you notice on the TBS ads, there are 11 players and the coach. I am pretty sure they will add another player. Shimamura, Kobata, Okamura and Tashiro are not in that picture. I am leaning against Tashiro being on the final 14.