Kentucky Welcomes Four Freshmen and One Transfer in 2017 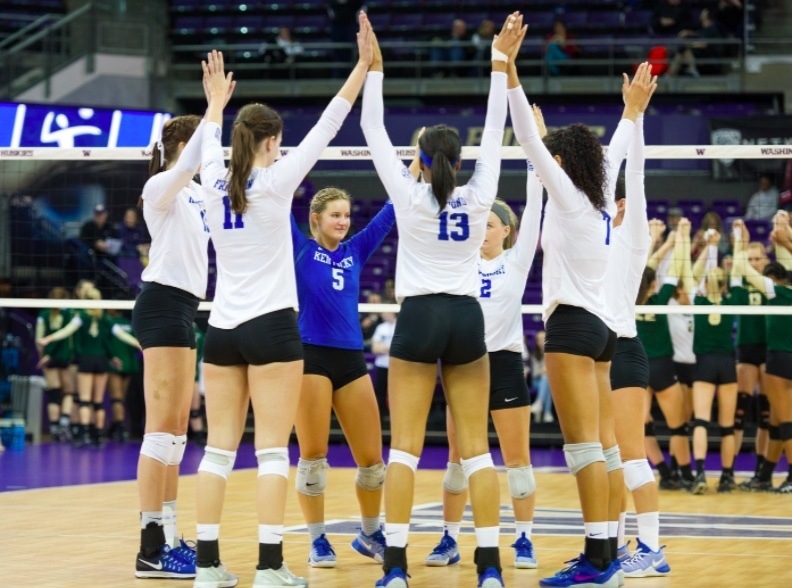 A nationally touted recruiting class of four women along with a transfer head to Lexington for Kentucky's 2017 season. Archive Photo via Andrew Tat/Kentucky Athletics

Kentucky tops of the top 23:

The Kentucky Wildcats are entering 2017 after they finished with a 23-8 record in 2016 and a 15-3 in SEC play. That mark put them just a match win behind a shared conference championship, as they made it to the second round of the NCAA Tournament before bowing out and finishing ranked 23rd in the final AVCA Coaches Poll. Now in 2017, Kentucky brings back a wealth of talent that will fuse with four highly-touted freshmen and an incoming transfer to compete at the highest level come the fall season.

All four of the incoming freshmen were named to some form of the AVCA High School Under Armour All-American team. Gabby Curry and Madison Lilley lead the charge, as both were listed on the Under Armour First-Team All-America group. A 5’8″ libero from Buford, Georgia, Curry was a part of the U.S. Junior Women’s National Team for the U20 World Championships this summer where she teamed up with soon-to-be Kentucky teammate and rising sophomore Leah Edmond. Lilley meanwhile comes in from Overland Park, Kansas and is a 5’11” setter who was ranked as the fourth best recruit in the country by PrepVolleyball.

The other duo of freshman, Kendyl Paris and Avery Skinner, appeared on the second and third team of the Under Armour All-American listing, respectively. Paris is a 6’3″ middle blocker from Hilliard, Ohio and was ranked as the 81st best recruit by PrepVolleyball while Skinner comes in from Katy, Texas as a 6’1″ outside hitter who was ranked 46th overall.

Not only do all four players play different positions, but the class was ranked number five in the country by PrepVolleyball. That makes it the highest ranked recruiting class in Kentucky women’s volleyball history in addition to the eighth top-20 class.

The final addition to the roster comes by way of the transfer market in Meredith Jewell, a 5’11” outside hitter who was previously with Morehead State. At her previous stint she was All-Ohio Valley Conference both seasons as she logged over 900 kills in two years. Although she is not an incoming freshman, she joins the club of being a former Under-Armour All-American as she was a former Kentucky Gatorade Player of the Year.

The five newcomers should provide depth and instant impact for Kentucky on a team that brings back plenty of talent. In fact, all of the award-recognized Wildcats are back in 2017 including Edmond, who was the 2016 SEC Freshman of the Year and an AVCA Third-Team All-American. Setter Olivia Dailey and libero Ashley Dusek also return after earning a spot on the AVCA All-America Honorable Mention squad.

With the additions and what the Wildcats have coming back, we have Kentucky as our 18th ranked team in the ‘Bit-Too’Early Top 25’ from VolleyMob.