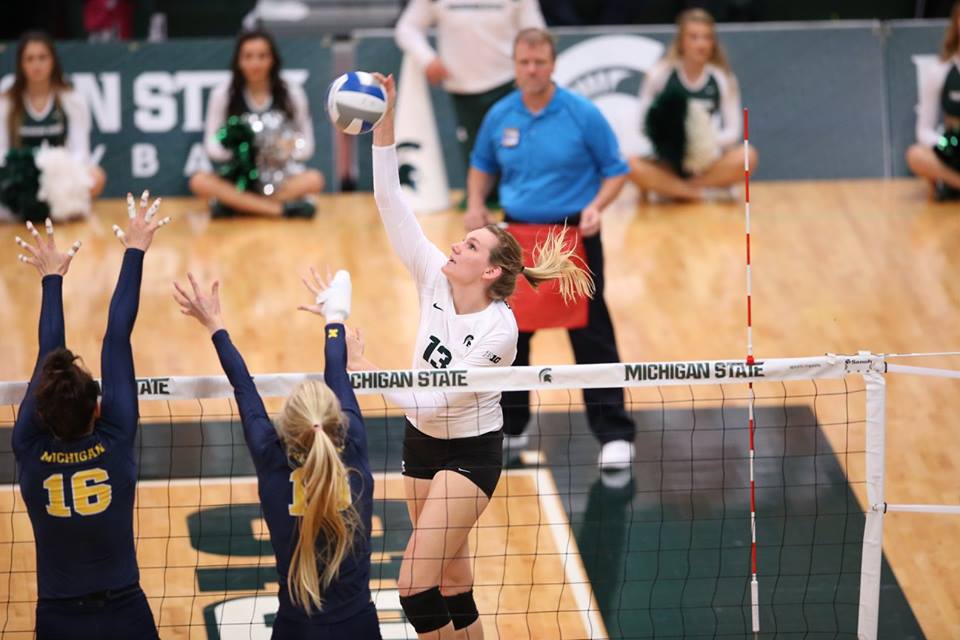 Brooke Kranda and Alyssa Garvelink turned in 12 kills apiece for Michigan State, while Marysa Wilkinson and Jaali Winters notched double-digit efforts for Creighton as both advanced to the NCAA Second Round in Omaha.  Archive Photo via Michigan State Athletics

Michigan State moved on to the second round for the seventh straight season with a sweep of Missouri Valley champion Missouri State and will now face Big East champ Creighton after the Bluejays downed Coastal Carolina in four sets Friday night in Omaha.

Redshirt senior outside hitter Brooke Kranda served up six aces and put down a team-best 12 kills, including the match-winner to lift Michigan State past Missouri State in a sweep Friday night.

The victory moves the Spartans into the NCAA second round for the seventh straight season.

Sophomore outside Aubrey Cheffey was tops for the Bears with nine kills and a .438 hitting effort. Senior outside Lily Johnson was held to just five kills and hit .000 for the match. Senior middle Lynsey Wright and junior outside Cambree Villarreal added four kills apiece. Wright put up a team-best three blocks, while junior libero Emily Butters pulled up 14 digs to pace the defense.

After a tie at 8, Michigan State jumped out to a five point lead at 15-10 with a pair of blocks and kills by Kranda, Garvelink and Toliver. An ace by Bailey made it 19-13. Up 21-18, MSU scored four of the final five including a kill, a block and an ace by Kranda.

The Spartans used a 7-0 run to pull away to a 13-6 lead in Set 2. Back-to-back aces by Toliver capped the run, which also included a pair of Tompkins stuffs. The Bears would get no closer than six the rest of the stanza. Michigan State closed out the win with a 7-1 run as Kranda served up two aces and Garvelink downed the final kill.

A 4-0 midset run put Michigan State up 15-9 in Set 3. A strong service game again was key as two more Kranda aces and a kill and a block by Toliver gave the Spartans the edge. Missouri State cut the margin to four at 18-14, only to see Michigan State scored seven of the final eight. Kranda put down four kills in the final stretch.

Outside hitter Leah Hardeman put down a match-high 25 kills to become Coastal Carolina’s all-time kills leader (1,811), but it was not enough to lift the Chanticleers past No. 9 seed Creighton.

Set 1 featured four lead changes and saw Coastal hold a 12-10 lead midway through, but Creighton rallied with seven of the next eight points to pull away. Four CCU miscues aided the Bluejay rally. A Hardeman kill had the Chants within two at 19-17, but they couldn’t break through eventually falling 25-20 after a Wilkinson kill and a Samantha Bohnet ace.

The teams tied 13 times in Set 2, with the final two coming after set-point tries. After three lead changes, the teams wound up at a 16-all stalemate. The Chanticleers went up 19-17 on a stuff by Lulic and Kaylah House. Creighton called timeout but couldn’t stop Coastal from going up 23-19 with three more kills. A Hardeman kill gave CCU a set-point try at 24-21. Two miscues and a Winters putaway knotted things at 24. A service error gave the Chants another try at 25-24, but the Bluejays answered with three straight points to steal away the 27-25 win.

Coastal turned an 8-all tie in Set 3 into a six-point advantage (14-8) with three aces and a kill by Hardeman. Creighton would get no closer than four the rest of the set. Two kills each by Lulic, Hardeman and Aristea Tontai helped CCU to a 25-20 win.

A 5-1 midset run lifted Creighton to a 15-11 lead in Set 4. Ballenger downed two kills in the run. Coastal tied it up at 18 on a block by Hardeman and Lulic. The teams traded two-point runs leading to a 20-all knot-up. The Bluejays clinched the second round berth with five of the final seven points. A kills and a block by Wilkinson and a Winters putaway set up the final point, which came on a CCU hitting miscue.