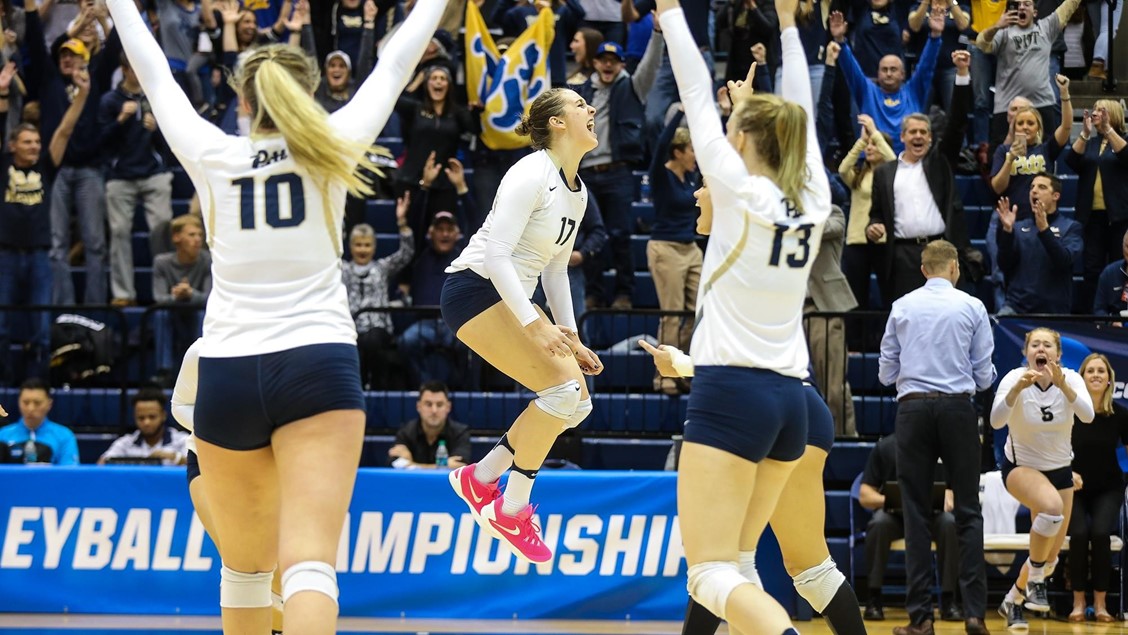 Sophomore right side Nika Markovic notched a 17-kill, 13-dig double-double and four blocks to lead a quartet of Pitt players with double-doubles in Pittsburgh's first round win. Meanwhile, Penn State held Howard to .085 in a four-set win in Match 2 in University Park.  Current Photo via Pittsburgh Athletics

UNIVERSITY PARK, Pa. – It will be an in-state affair in the NCAA Second Round on Saturday as Pittsburgh advanced past VCU in a sweep and homestanding Penn State edged Howard in four sets on Friday night.

Four players posted double-digit kills to lift Pittsburgh past VCU on into the NCAA Second Round on Friday.

Pitt took a dominating seven-point lead at 11-4 in Set 1 and never looked back. The Panthers showed balance from the start with four players tallying kills in the early run. Three Van Buskirk kills helped Pitt to a 21-11 lead, while Ndee put down the final kill at 25-14.

The Panthers snapped a 9-all tie with a 7-2 run, including aces by Akeo and Williams to go up 16-11. A kill and a block by Williams put Pitt ahead 20-14. VCU narrowed the gap to two at 22-20 with three Giommarini kills and two Pitt miscues. Two Markovic kills and a Ram error closed out the 25-20 win.

VCU turned the tables, jumping out to a 12-4 advantage with help from five Pittsburgh miscues. Three Sneed blocks highlighted the early rally. The Panthers knotted the score at 13 with four kills and a block by Markovic. VCU led by just one at 19-18, but kept the match going with a 6-0 run. Two Adler kills and a kill and a block by Kandler lifted the Rams to the 25-18 victory.

Pitt jumped ahead 18-7 in the final set. Four aces and kills by four different players gave the Panthers the lead they would not relinquish. A 5-2 run capped the match. A kill and two blocks by Van Buskirk made it 24-11. A service error and a block kept the match going, but Lund pounded down the final kill sending Pitt to the second round for the second straight year.

Penn State held Howard to a .000 hitting effort in three of four sets with help from 11 blocks to move on to the NCAA second round on Friday.

Senior outside Jessica Young was the lone Howard player with double-digit kills, notching 11, while four others put down seven or more. Sophomore middle Kira Porter (9), junior middle Olubunmi Okunade (8), senior outside Khalia Donaldson (7) and freshman outside Jurnee Tipton (7) rounded out the offense. Okunade and Tipton accounted for two blocks apiece, while senior libero Carlise Cardoza pulled up 10 digs. Donaldson and Young each served up two aces.

Two kills and a block by Washington got the Nittany Lions started with a 7-1 lead in Set 1. Later, a 6-0 run, including two Frantti putaways and three Howard miscues, made it 17-6 PSU. A Bison service error set up the final point, which came on a stuff by Gorrell and setter Abby Detering.

The Bison battled back in Set 2, hitting at a .355 clip and rallying from down 10-7 to take a 14-12 lead. Tipton downed two kills and Young and Tamia Dockery added aces in the 7-2 run. Penn State regained the lead at 17-15 after two Howard errors and a block. Trailing 18-16, Howard scored three straight including two Porter kills to take the lead at 19-18. PSU managed a tie at 19, but the Bison held them at bay down the stretch, clinching the win at 25-22 with a block by Tipton and Okunade and a hitting error.

Up just one at 6-5 in Set 3, Penn State pulled away with a 12-2 run. Five players turned in kills in the rally including two each by Gorrell and Washington. Frantti also notched two blocks in the stretch. Howard was within seven at 18-11, but could not break through. Two putaways each by Frantti and Washington set up the final two points, which came on kills by Gorrell and Lee.

The teams were level at 8 in Set 3, before the Nittany Lions scored six straight, including two kills and a block by Thelen. Howard sliced the margin to three at 15-12 and 17-14 but Penn State was too strong in the end, closing out the match with eight of the final 10 points. Lee and Gorrell downed two kills each in the final stretch.