Brazil Squeaks Past Iran in 5; Karpukhov Guides Russia in Sweep 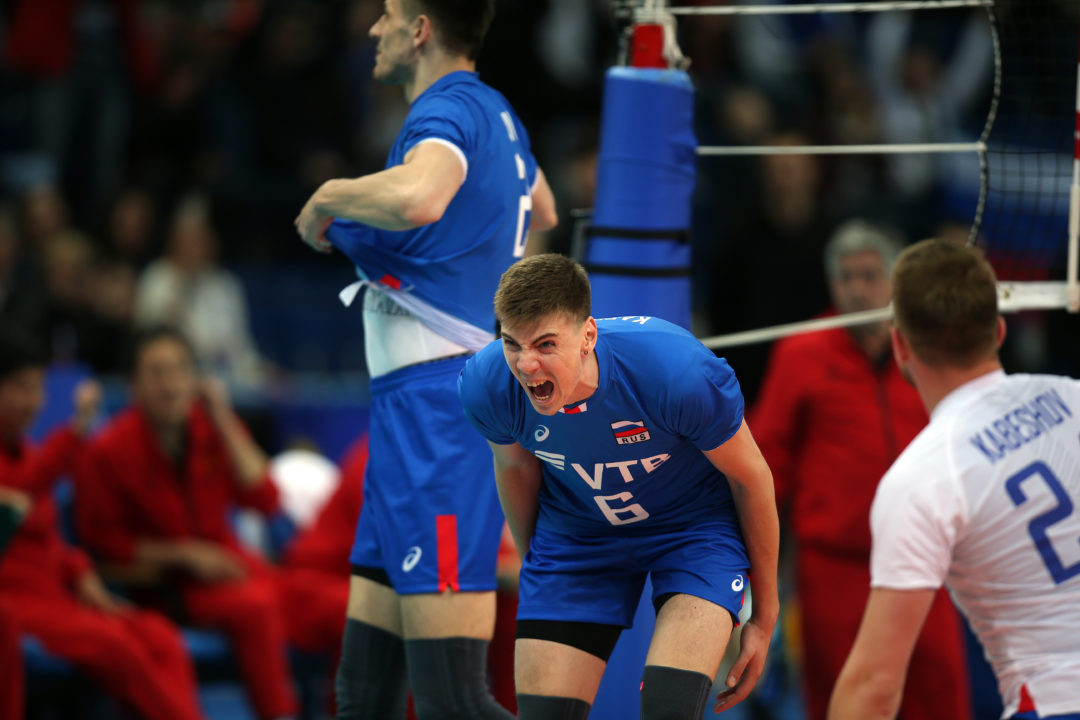 Thirteen blocks were not enough to lift Iran past a Brazilian side, which leaned on Douglas Souza and Wallace DeSouza in a five-set affair on Saturday. Meanwhile, Anton Karpukhov did it all for Russia, posting a match-high 21 points with 15 kills, four blocks and two aces, in a sweep of China.  Current Photo via FIVB

Thirteen blocks were not enough to lift Iran past a Brazilian side, which leaned on Douglas Souza and Wallace DeSouza in a five-set affair on Saturday.

Souza pounded down 18 kills and put up four of Brazil’s six blocks, while DeSouza chipped in 17 kills and an ace. Mauricio Souza (11) and Lucas Saatkamp (11) rounded out the main scorers, with two aces apiece to go with eight and nine putaways respectively. Twelve players saw action with nine scoring at least one point.

Iran opted to leave Milad Ebadipour on the bench to start the match, using him sparingly as a substitute in Sets 2 and 3, before putting him in the lineup for the final two stanzas. Saman Faezi and Amir Ghafour remained on the sidelines throughout. With that said, it was left to Saber Kazemi, Farhad Ghaemi and Masoud Gholami to carry the team, which they did, each turning in double-digit scoring efforts. Kazemi posted 15 points on 11 kills and a team-best four blocks. Ghaemi followed with 12 putaways and two aces and Ghaolami tacked on 12 points on eight kills and a team-leading four blocks.

Brazil coach Renan Dal Zotto: “We knew that this would be a tough match because Iran’s team is very strong. Their game is very fast-paced. We assumed that the game would be drawn out and we’d have a hard time, but we’re glad that it turned out this way and we won.”

Brazil captain Bruno Rezende: “We had a really good start especially in the first set. Our opponents had a lot of players we didn’t know, so we had to get accustomed to them first. Rebuilding our game plan took some time, so we couldn’t play as aggressively as yesterday. But we got into the zone and we played with full power.”

Anton Karpukhov did it all for Russia, posting a match-high 21 points with 15 kills, four blocks and two aces, in a sweep of China.

Egor Kliuka and Romanas Shkulyavichus also managed double-digit scoring efforts with 14 and 11 respectively. Kliuka downed 13 kills and added a block, while Shkulyavichus tacked on nine putaways, a block and an ace in place of Konstantin Bakun. Dmitriy Muserskiy managed five points on four kills and a block before exiting the match after Set 1.

China used a balanced attack to counter the Russians with four players turning in six or more kills and tallying nine or more points. Jingyin Zhang led the way with 13 points (9 kills, 2 blocks, 2 aces), while Chuan Jiang (11) and Haixiang Du (11) followed. Jiang put down a team-best 10 kills and added a block, while Du notched nine kills and two blocks. Shuhan Rao rounded out the group with nine points on six kills and a team-best three blocks.

Despite facing large deficits early in the set, Russia rallied to grab a 23-21 advantage when it counted. Shkulyavichus came through in the clutch with a kill and an ace to seal the 25-23 win.

The teams were level throughout much of Set 2, but Russia flexed its offensive muscles with Karpukhov and Kliuka posted 10 points apiece and hung on for a 25-23 victory. A missed serve by Jiang capped the stanza.

Russia struggled out of the gate in Set 3, falling behind 8-6 and later by four due to China’s serving prowess. Errors piled up for the Chinese and Russia found its block to even the score. The teams traded points after that, but, in the end, the star of the show Karpukhov issued the final blow at 31-29.

Russia coach Sergei Shliapnikov: “Dmitriy Muserskiy and Konstantin Bakun had some issues so we had to swap in different players right before the game. That became somewhat problematic for the team because new players meant new tactics. We can’t have a proper training regiment right now because the team is constantly on the move. We’re trying to keep the necessary muscle tone. It’s great that our guys came in the court today and did what they had to do – to win, while the newcomers did their part. Letting Shkulyavichus out there wasn’t a plan, the medical staff just said that we should take care of our players.

“Karpukhov is improving in every game and we’re satisfied with his current performance. Not everything went as we’d want it to, but overall there’s definitely a positive trend with him. We expect more from Shkulyavichus because, naturally, he’s a man who has to bear a lot in the club. He’s made some marks as a member of the national team and we’re hoping that he’ll get us more points.”

Russia captain Igor Kobzar: “Our main gold today was to win and we achieved it. We’re moving forward. The game was really tight, we were neck and neck with the Chinese, so we had to look for the optimal tactics. Philippov came out to play today and he’s very easy to play pipe with. The pipe worked and that really helped us. Karpukhov carried the third set and helped a lot in the end. We have this mindset – we have to win at all cost. It works well but in some aspects, it restricts us. We were the ones who let our opponent play like this today.”

China captain Ji Daoshuai: “We played better than yesterday, but we didn’t play well enough in some crucial points. However, it’s going to be for our own benefit in the long run. We have to improve a lot of deficits in our training in the future.”