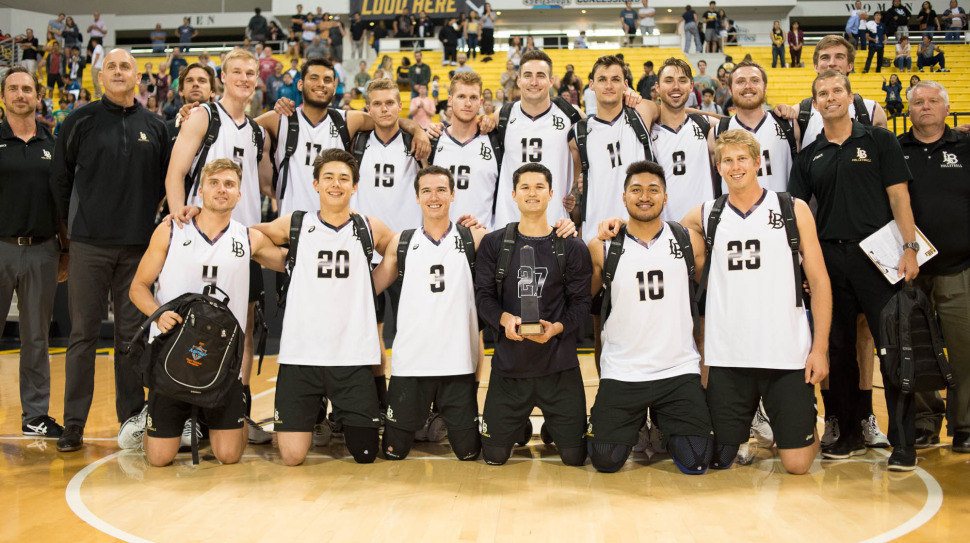 After Hawaii subdued the Long Beach State offense in set 1, the home team roared back to win 3-straight and win its first-ever MPSF Championship in any sport on Saturday night.

The Beach out-blocked Hawaii 7-4 on the day; 3 of Hawaii’s 4 blocks came in the first set.

Long Beach State had two players, Kyle Ensing and MPSF Player of the Year TJ DeFalco, who had 15 and 12, respectively. DeFalco added in 9 digs to his stat-line.

Amir Lugo-Rodriguez had 3 block assists and 1 solo to lead the defensive effort at the net.

Larry Tuileta started at libero for Hawaii (he’s also played outside hitter this year), and dug 10 balls in the losing effort.

As the runners-up in the 2nd-best conference in the country, Hawaii will likely get a spot in the 2017 NCAA tournament as well. They will find out for sure at 1PM Eastern Time, during the selection show that will stream live on NCAA.com.

LONG BEACH, Calif. — Top-ranked Long Beach State won its first-ever MPSF Championship in any sport after defeating No. 3 seed Hawaii, 3-1 [17-25, 25-20, 25-13, 25-23] on Saturday night inside the Walter Pyramid. With the victory, the Beach have officially punched their ticket to the NCAA Tournament for the second-straight season.

After dropping the first set to Hawaii (26-5), Long Beach State (27-3) came back and rattled off three consecutive set victories to improve to 16-0 at home, marking the most home wins in a single-season in program history.

The Beach hit .361 in the match and were led offensively by Kyle Ensing and TJ DeFalco who combined for 27 kills. Ensing led the way with 15 on .367 hitting, while DeFalco added 12 on a .429 clip. DeFalco would go on to be named MPSF Tournament MVP after coming up one dig shy of a double-double in the championship match.

Ensing, along with setter Josh Tuaniga, were named to the All-MPSF Tournament Team. Ensing finished the contest with six digs, two assists, a pair of service aces and one block, while Tuaniga dished out 37 assists, four kills on five attempts without committing an attack error for a hitting efficiency of .800. He also added five digs, three aces and two blocks.

The Beach got off to a slow start as the Rainbow Warriors out-hit them .240 to a mere .038 in the first set. Hawaii broke a 3-3 tie after tallying three straight points to take a 6-3 lead over LBSU that it would not relinquish. The `Bows would go on to win the opening frame 25-17.

The third set was all Long Beach State as the Beach kicked off the frame on a 5-0 run forcing Hawaii to call a timeout. After the `Bows got on the scoreboard, the 49ers would go on another 5-0 run to extend their lead to 12-4. LBSU kept the set at arm’s length rattling off another five straight points to open the game up 19-7. Long Beach State hit a sizzling .632 (12-0-19) in the frame, while Hawaii struggled with a .042 attack percentage (8-7-24) as the Beach cruised to a 25-13 victory.

The conference foes battled it out in the fourth set as the two teams fought through 17 ties and three lead changes. Tuaniga severed up his third ace of the match to give Long Beach State a 22-20 lead that it would hold onto for the remainder of the contest.

Following Tuaniga’s ace, the Beach took back the set and match on kills by DeFalco, Ensing and Whitt to win the set, match and MPSF Championship with a 25-23 victory.

Long Beach State will find out its seeding in the NCAA Tournament during the selection show on Sunday, April 22 at 10 a.m. The Beach will hold a Watch Party at Legends in Long Beach, Calif., for friends, family and fans to join in the celebration.

LONG BEACH, Calif. – The University of Hawai’i men’s volleyball team’s bid for its first Mountain Pacific Sports Federation Tournament title came to an end after a four-set loss to host and No. 1 Long Beach State Saturday at the Walter Pyramid. Set scores were 17-25, 25-20, 25-13, 25-23.

The Rainbow Warriors (26-5) will now await word whether they will receive one of two at-large bids into the six-team NCAA Tournament. The Beach (27-4) captured their first MPSF Tournament title and earned the league’s automatic berth.

LBSU was led by Kyle Ensing’s 15 kills while tournament Most Outstanding Player TJ DeFalco chipped in with 12 kills and nine digs. Setter Josh Tuaniga had three of the team’s five aces and directed the 49ers to a .361 hitting percentage.

UH seized control of the first set with an 8-2 run, including two huge double blocks by Gasman and Jennings Franciskovic for a 15-8 lead. Moments later, back-to-back kills by Fey gave UH an 18-12 lead. The lead was 21-14 after an LBSU bad set and the Warriors rolled to the first set win after Bryce Yould’s attempt went wide.

The Beach quickly answered back in Set 2, jumping out to a 7-2 lead. UH rallied to within two at 11-9 before the 49ers went ahead 15-11 at the media timeout. At 19-15, UH middle blocker Hendrik Mol exited the match due to a leg injury and would not return. Three straight UH hitting errors gave the Beach a 23-18 lead and LBSU cruised tied up the match at 1-1 with the 25-20 victory.

Freshman outside hitter Rado Parapunov started Set 3 in place of a struggling van Tilburg and the Warriors fell behind 5-0 early. The Beach pushed their lead to 12-4 after scoring five unanswered which included three UH hitting errors. LBSU blew it wide out, making it 19-7 with another five-point spurt en route to a 25-13 win and 2-1 lead in the match.

The teams battled back and forth in Set 4. UH took a 15-13 lead at the media timeout. With the score tied at 20, van Tilburg’s serve was questionably called long, which should have given the Warriors the lead. That coupled with Tuaniga’s ace gave the Beach a 22-20 lead and the teams traded points the rest of the way. Andrew Whitt’s kill ended it.