Pool A: Sweeps All Around Monday at FIVB Worlds 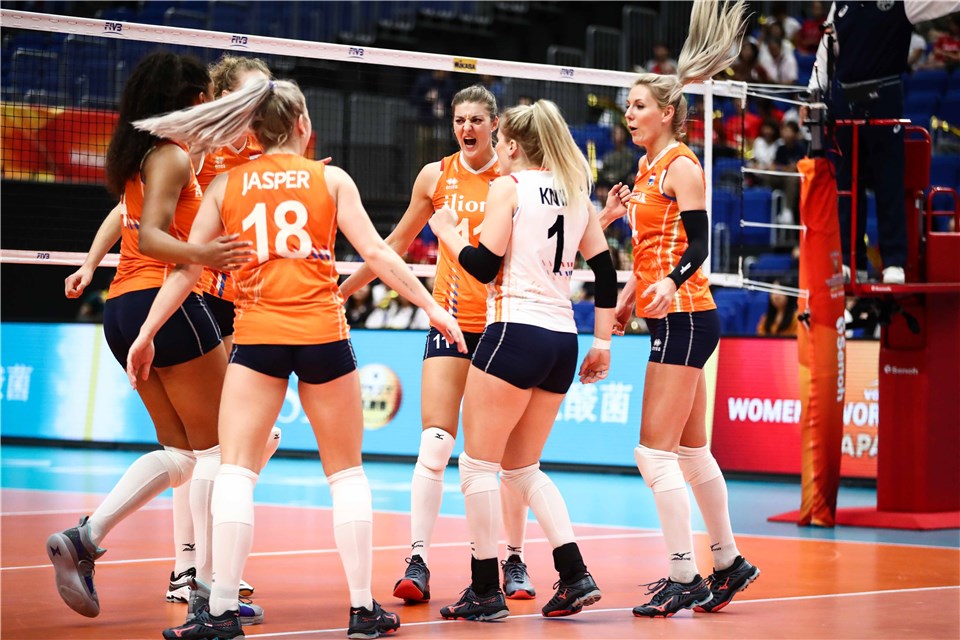 Pool A action on Monday at the 2018 FIVB World Championship was very competitive, however, the results all game in straight sets for Germany, Netherlands and Japan. The Netherlands is alone atop the standings in Pool A with a 3-0 mark and 8 points. Current Photo via FIVB

Pool A action on Monday at the 2018 FIVB World Championship was very competitive, however, the results all game in straight sets for Germany, Netherlands and Japan. The Netherlands is alone atop the standings in Pool A with a 3-0 mark and 8 points.

Despite the team result, Germany had all they could handle in a 3-set victory against Argentina on Monday at the 2018 FIVB World Championship. The Germans overcame a 66-point second set to move to 2-1 in Pool A, while the Argentines drop to 0-3 with the loss.

“Argentina deserves to be here because they play at a high level,” Germany head coach Felix Koslowski said. “We expected them to play with great fighting spirit and great technique and tactics and to put us under a lot of pressure. Even when we led by three or four points we never felt safe and had to push, push, push. My players did a really excellent job.”

Though trailing the Argentines in blocks (9 to 5) in the match, the Germans capitalized with 6 service aces and 18 Argentina errors to prevail.

Louisa Lippman led Germany to victory with 18 kills, including 11 points in the marathon second set, followed by Maren Fromm, who notched 14 kills overall and 7 points in the second set.

The Netherlands battled a quick turnaround, lack of sleep and a typhoon in addition to Cameroon, which it bested in straight sets Monday in Pool A action. With the win, the Netherlands is alone at the top of the standings with a 3-0 mark, while Cameroon falls to 1-2 in 2018 FIVB World Championship standings.

“It was a difficult match for us because we had the late match last night and spent a lot of energy and we did not sleep much because of the typhoon,” Netherlands head coach Jamie Morrison said. “Cameroon was a dangerous match and they have a lot of energy. We are aiming to be one of the top three teams in the world.”

The Netherlands used an 8 to 4 blocking advantage to disrupt Cameroon throughout the match and benefited from 17 errors from its opponent.

Celeste Plak keyed the win for the Netherlands, recording 23 points and 21 kills in the victory. Laetitia Moma, who notched 17 points on 14 kills, led the way for Cameroon offensively.

Major lineup changes made a difference for Japan, which rebounded with a win in straight sets against Mexico in Pool A action. The Japanese used a strong serve-receive, which included 13 aces, and low error volleyball to move to 2-1 at the 2018 FIVB World Championship, while Mexico fell to 1-2.

“We lost yesterday’s match (3-2 against Netherlands) in a very disappointing way so I was worried if the players could focus on today’s match,” Japan head coach Kumi Nakada said. “But they switched their mindset from yesterday to today’s match and this was a very good point. After the defeat yesterday, I wanted to reset the team and, with such a long way ahead, I thought today was a good time to make major changes to the starting members.”

In the 3-set match, 9 of 12 players who saw action for Mexico started a minimum of one set. Middle blocker Nana Iwasaka appeared as a starter in all three sets, the first starts of the competition for the team captain.

Mexico was led to victory by Andrea Rangel and Samantha Bricio, who both contributed 10 kills in the match. For Japan, Yuki Ishii (12) and Miyu Nagaoka (10) registered double-figure kill totals.