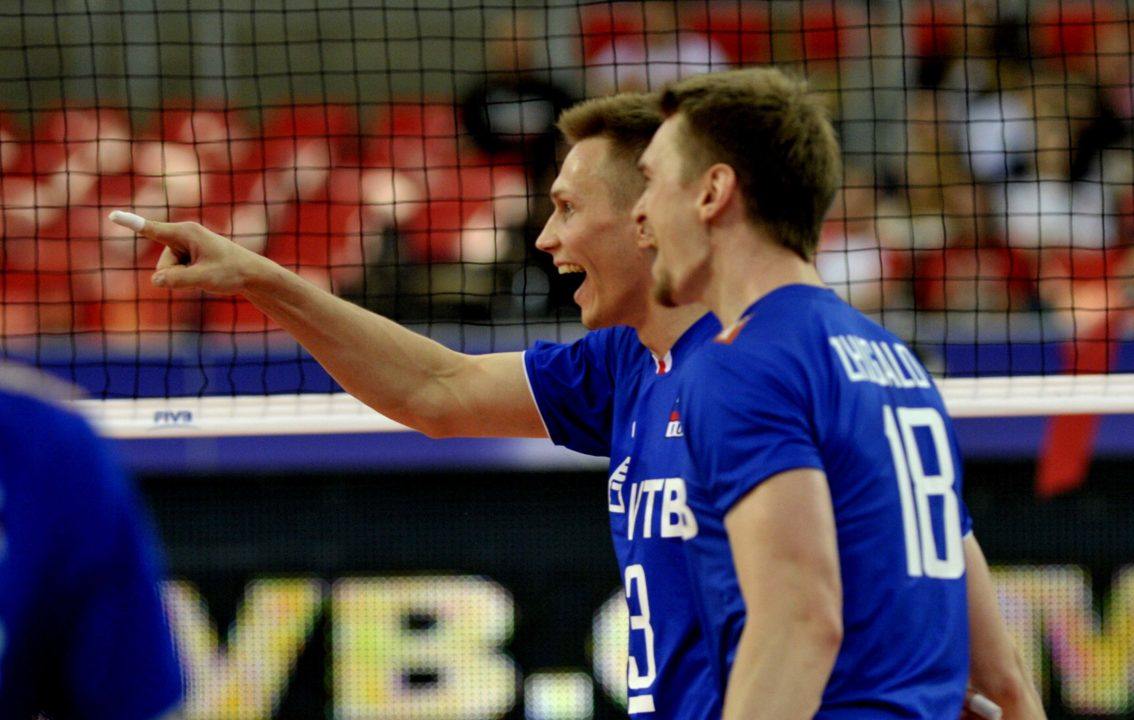 Pool H1 featured matches on two ends of the volleyball spectrum in day two, with Russia overcoming Team USA in a daunting five-set match, while Poland rolled through Iran in a three-set sweep. Current Photo via FIVB

Pool H1 featured matches on two ends of the volleyball spectrum in day two, with Russia overcoming Team USA in a daunting five-set match, while Poland rolled through Iran in a three-set sweep.

Each of the teams are fighting for their place in the Final Six that will take place in Brazil in two weeks. No teams from Pool H1 have qualified yet, with three teams depending on their own wins, along with other teams losses to make it in.

The match began with a difficult and long first set. Team USA started off the match slow falling behind 4-0 early but began to consistently climb their way back into contention at 12-11. The Russian block was crucial in the first set, to bring them to a 19-14 lead. The U.S. made a comeback in the first to force the match into extra points, ending with a Russian first set victory of 31-29.

The second set began the opposite of the first, with the Americans taking the 4-0 lead to start the set. Team USA cruised to their 25-17 second set victory to tie the match 1-1. The third set went in the way of the Russian crew, with a 25-19 victory, followed by another tough fourth set, that went into extra points. Team USA took the fourth set 29-27 to tie up the match at 2-2, forcing a fifth and deciding set.

The final set was a tight contest between the two teams, with points being exchanged back and forth. The Americans took a 5-3 lead early, but Russia quickly came back to tie the match a 9-9. Russia came out on top 15-12 to take the match.

Russia used 39 Team USA errors to their advantage, what that statistic helping them to win, despite a 66-55 attacking disadvantage.

Egor Kliuka led the Russians with 22 points on 19 kills and three blocks. Ilyas Kurkaev dominated defensively at the net with a match-best six blocks.

For Team USA, Taylor Sander led all players with 28 points, but it was not enough to help the Americans to victory. Ben Patch added another 14 points in the loss.

Poland flew straight through Iran in a straight set match on the second day of week three. They showed no mercy, leading with 44-33 in attacks, 7-6 in blocks and 4-0 in service aces.

The first and second sets were a breeze for the Polish men, as they jumped out to a lead that the Iranian team couldn’t fight back to. In the third set, Iran pushed back on the Polish, making it a tighter match. Poland stayed steady and consistent to take the set and match 25-22.

Michal Kubiak led the Polish men with 15 points, all of which came off kills, while Dawid Konarski added another 12 points in the victory. Rafal Buszek contributed 10 points, with three coming from aces, a match-best.

Iran’s offense was led by Milad Ebadipout Ghara H. and Farhad Ghaemi who each put down eight points in the loss.