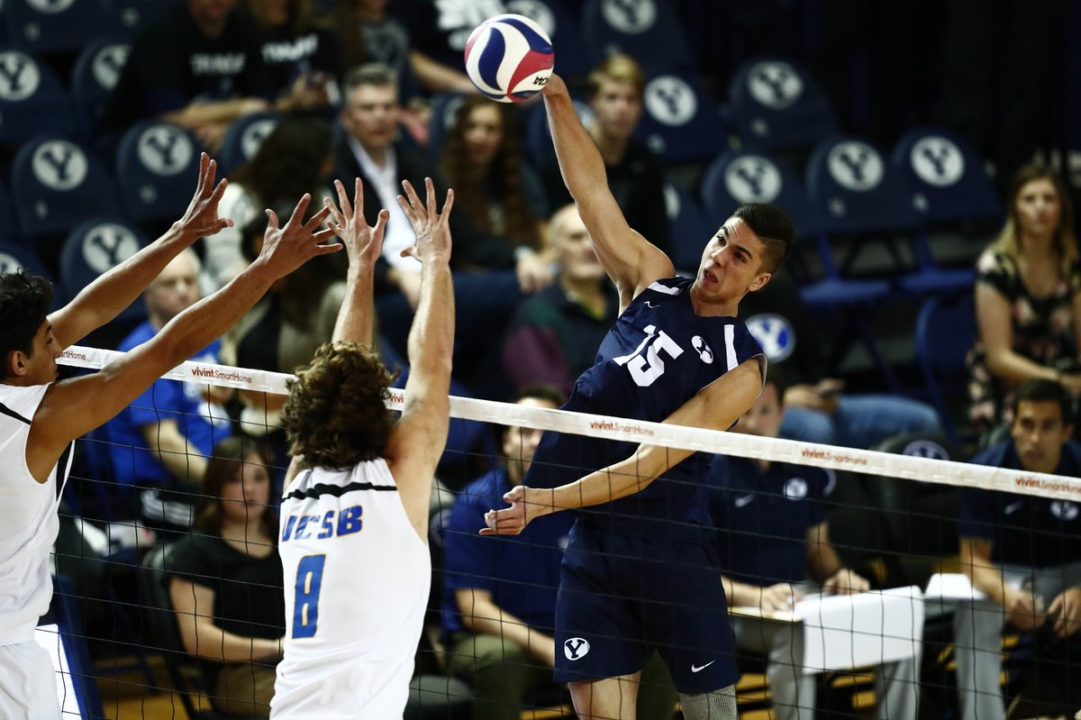 BYU picked up its third straight win by topping USC in every statistical category as senior outside hitter Brendan Sander notched a career-high 23 kills and five aces.  Current Photo via BYU Athletics

Senior outside Brendan Sander notched a career-high 23 kills and five aces to guide the Cougars to victory. Freshman opposite Gabi Garcia Fernandez added 18 kills, while sophomore outside Storm Fa’agata-Tufuga and senior middle Price Jarman followed with nine and seven respectively. Jarman put up five blocks, while Fa’agata-Tufuga hit at a team-best .615 clip.

USC boasted an 11-7 lead in Set 1 after two kills apiece by Inlow and Moss. BYU chipped away at the deficit, eventually tying the score at 17 on a stuff by Miki Jauhiainen and Garcia Fernandez. Four different players turned in kills during the stretch. Down 19-18, USC scored four of the next five, including two Lewis putaways, but could not hold off a late BYU charge. The Cougars called timeout trailing 21-19 and outscored the Trojans 6-2 to steal away the set. Fa’Agata-Tufuga tallied three kills in the final rally.

The teams were tied at 9-all in Set 2, before USC pulled away with eight of the next 11 points. Two aces by Grasso and two kills each by Moss and Wyett put the Trojans on top 17-12. The Cougars did not go quietly, however, forcing a knot-up at 19 thanks to three Sander kills. Four BYU errors, a Lewis block and Grasso ace gave USC the 25-21 victory.

USC outhit BYU .448 to .387 in Set 3, but could not pull out the victory in the stanza, which featured 10 ties. Two kills and a block by Sander and a Leo Durkin ace put BYU ahead 11-7. USC called timeout trailing 16-12 and put together a 5-1 run out of the break with two Inlow kills and two Cougar miscues. The teams split the next six points leading to a 20-all tie. The Trojans came back from down 23-21 to tie the score again, but a service error and Sander’s seventh kill of the stanza capped the 25-23 BYU win.

BYU led by as many as six at 20-14 in Set 4 after three Sander aces, but USC rallied to tie it up at 21 with three kills and a block by Wyett. The Cougars worked their way to a 24-22 lead, but the Trojans tied it up with a kill by Moss and a stuff by Grasso and Inlow. A pair of Sander putaways gave the Cougars two more match point tries and a third finally sewed up the 27-25 victory. All told, Sander had six kills and three aces in the final stanza.

Sander led the Cougars with a career-high 23 kills on a .372 clip to go with a career-high five service aces (good for sixth-most in BYU rally-scoring era history). Fernandez contributed 18 kills on a .441 clip and six digs while Leo Durkin had a season-high 54 assists to go with eight digs. Also in the defensive effort, Erik Sikes collected a team-high nine digs and Price Jarman added four blocks.

Three kills from Fernandez helped BYU (8-4, 1-0 MPSF) take a 5-3 advantage over USC (4-8, 1-1 MPSF) early in the first set. The Trojans then began to pick things up offensively, going on a 7-1 run to pull ahead 11-7. A Sander kill brought the Cougars back within a point, down 16-15, before a Miki Jauhiainen, Storm Fa’agata-Tufuga and Fernandez block pushed BYU ahead 19-18. USC responded, however, by scoring the next three-straight points to take a 21-19 advantage. In turn, the Cougars rallied to eventually take the close set 25-23 after kills by Fa’agata-Tufuga and Fernandez.

BYU gave the Trojans six of their first eight points from service errors in the second set as the score was tied 8-8 early on. USC then went on a 6-1 run, which included three aces, to take a 13-9 lead and force the Cougars to take a timeout. The Trojans led by as many as five at 17-12 before a pair of kills from Sander helped BYU on a 4-0 rally to get within one, trailing 17-16. Another Sander kill made it 19-19, but USC responded with a 6-2 run to win the set 25-21.

Back-to-back blocks from Jarman put the Cougars up 4-3 to start the third set. The Trojans evened the set at 7-7, but BYU scored four-straight points to go up 11-7. USC got back within a point, down 13-12, but a kill and block from Andrew Lincoln helped push the Cougars back in front by four, 16-12. The Trojans then countered by scoring five of the next six points to tie the set at 17 apiece. The score remained tied at 20-20 and 23-23 before a USC service error and Sander kill gave BYU the set 25-23.

A Jarman ace put the Cougars in front 7-5 in the fourth set. BYU stayed ahead at 15-13 following a Sander kill. The Trojans eventually took a timeout trailing 17-14 after a Sander ace. Two more consecutive aces from Sander made it 20-14, but USC rallied to tie the set, 21-21, after a 7-1 run. The Cougars stayed focused, however, as BYU took the set and match in extra points, 27-25, after two final kills from Sander.

The Cougars stay on the road next, traveling to No. 10 Grand Canyon for the first time in program history Thursday, Feb. 15, at 6 p.m. MST. A video stream and live stats will be available for the match.

The Cougars improved to 8-4 overall while winning their MPSF opener.  USC fell to 4-8 overall and 1-1 in the MPSF.

Ryan Moss led USC with 16 kills while hitting .394, while Jack Wyett added 12 kills and Gianluca Grasso had 9 kills and 3 aces.

Gabi Garcia Fernandez added 18 kills (hitting .441) for BYU, Storm Fa’agata-Tufuga came off the bench to get 9 kills while hitting .615 and Price Jarman had 7 kills and 5 blocks.

USC next travels across town to face No. 2 UCLA on Wednesday (Feb. 14) at 7 p.m. PT in an MPSF match that will be shown live on Pac-12 Los Angeles.