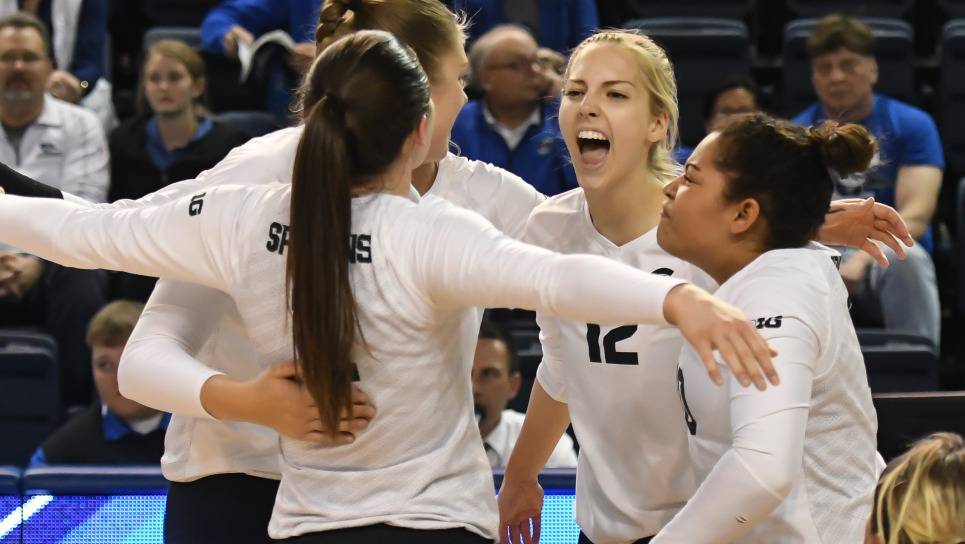 OMAHA, Neb. – The Michigan State Spartans are on to their first Sweet 16 since 2013 thanks to double-digit kill efforts by seniors Autumn Bailey, Alyssa Garvelink, Holly Toliver and Brooke Kranda.

Bailey led the Spartans with a match-high 18 kills to go with 11 digs and a .325 hitting effort. Kranda, Garvelink and Toliver added 13 putaways each. Garvelink hit at a team-best .455 clip and put up a team-leading four blocks, while Toliver chipped in 11 digs and Kranda served up three of the team’s five aces. Defensively, freshman Jamye Cox paced the team with 23 digs.

The teams tied 12 times in Set 1, last at 21. Down 21-20, Michigan State scored five of the final seven to grab the 25-23 win. Toliver and Bailey downed two kills apiece in the final stretch.

Set 2 was even through a tie at 12, but Creighton pulled away with an 8-2 run. Wilkinson notched five kills as the Bluejays went up 20-14. The Spartans would get no closer than five the rest of the set. A block and a kill by Ballenger made it 24-17. Kranda and Toliver kept the set going, but a Winters putaway evened the match.

Another back and forth battle came in Set 3, leading to an 18-all tie. From there, the Spartans took over with a 7-2 run led by the senior quartet. Kranda posted three kills, while Garvelink and Toliver recorded two apiece. Creighton called a timeout down 24-20, but Toliver put the Spartans ahead 2-1.

Michigan State wasted little time in Set 4, staking its claim early with an 11-3 advantage. Two aces by Kranda, two kills each by Toliver and Garvelink and a kill and a block by Bailey highlighted the early surge. Creighton rallied to within five at 13-8 with help from three Spartan miscues. Two kills and two blocks by Minarick and two Kranda putaways gave the Spartans a 21-12 edge. The Bluejays scored four of the next six, three on MSU errors, but that only cut the margin to seven at 23-16. A service error followed by a Minarick ace punched the Spartans’ Sweet 16 ticket.

MSU rallied in the third and fourth sets to seal the win, hitting .300 in both sets and finishing with a .325 hitting percentage overall. The Spartans improve to 23-8 overall, while the Bluejays conclude their season with a 26-7 mark.

The Spartans had a pair of players with double-doubles – 18 kills and 11 digs for Autumn Bailey and 13 and 11 digs for Holly Toliver. Brooke Kranda and Alyssa Garvelink also had 13 kills for the Spartans, as Garvelink hit .455 and added a match-high four blocks.

MSU heads to the Round of 16 for the first time since 2013 and for the seventh time in school history.

The ninth-seeded Creighton volleyball team fell to Michigan State during the Second Round of the NCAA Tournament on Saturday night in front of 2,415 fans at D.J. Sokol Arena – the fourth largest crowd in the venue’s history.

Autumn Bailey led the Spartans with 18 kills while three other Michigan State players had 13.

Creighton (26-7) had three players with double-figure kills, led by Marysa Wilkinson with 13.

Saturday’s action started with a race to 25 points that featured 12 ties and four lead changes.

A kill by Naomi Hickman gave Creighton a 12-9 edge, the first and only lead of more than two points by either team during the first set.

Five different Bluejays tallied at least two kills during the first set, with Wilkinson leading the way with four.

Creighton gained a 7-6 lead in the second set on a kill from Jaali Winters, but Michigan State used a 3-0 run to force the Bluejays to call timeout.

An attack error, solo block by Dimke and Wilkinson’s sixth kill of the night gave the Bluejays their first 3-0 run of the second set to take a 15-13 edge and force Michigan State to call timeout.

Creighton used an 8-1 run which included five kills from Wilkinson, to take a 20-14 lead.

A kill by Winters into the back right corner of the court gave Creighton a 25-19 victory during the second set to even the overall match at 1-1.

The Bluejays hit .432 during set No. 2 as Wilkinson recorded five kills, Winters and Taryn Kloth each had four, and Megan Ballenger finished with three on three swings.

Michigan State jumped out to a 4-1 lead during the third set in an attempt to regain control of the match.

The Bluejays gained a 6-5 edge after a long rally ended with an attack error for their first lead following the intermission.

Creighton held a 15-14 lead at the media timeout, but the Bluejays never led by more than one through the first half of the third frame as Michigan State continued to limit any of Creighton’s opportunities to control momentum.

The Bluejays final lead of the third set occurred at 17-16 before the Spartans closed out the match on a 9-3 run, capped by a kill by Toliver.

The Spartans gave up the first point of the fourth set before recording the next five, forcing Creighton to take an early timeout.

Michigan State reached double-digits and took an 11-3 lead behind six kills on 12 swings.

After calling their second timeout of the match, the Bluejays went on a 3-0 run behind the serving of Winters for a short spurt of momentum before the Spartans controlled the remainder of the match.

Michigan State duplicated their eight-point lead after a kill by Rachel Minarick made it 18-10, and Minarick’s third kill of the match gave Michigan State its first nine-point lead, 21-12.

Michigan State advanced to the Sweet 16 next weekend, the Spartans first appearance in the third round since 2013.