France, Canada, and Brazil Start Off Pool B Play With Easy 3-0 Wins 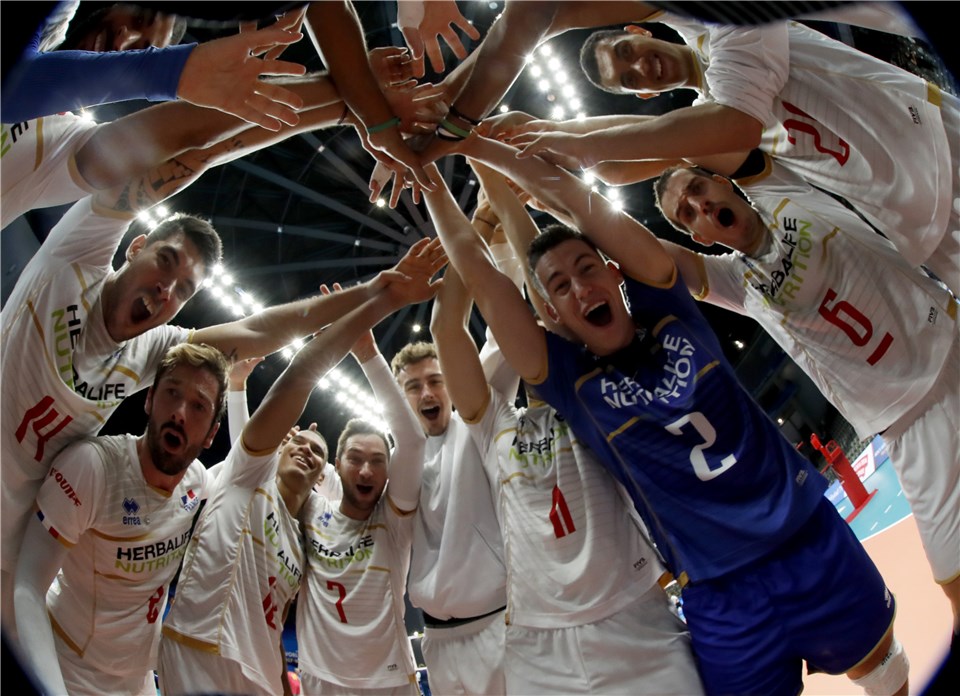 Pool favorites France, Brazil, and Canada all debuted at the tournament with relatively easy 3-0 wins Current Photo via FIVB

Pool favorites France, Brazil, and Canada all debuted at the tournament with relatively easy 3-0 wins. The highlights of the day came courtesy of the French team, which saw a recovery Earvin Ngapeth make the opening day’s roster and an inspired Stephan Boyer erupt for an 11-point first set against China. Here is a recap of all of the day’s action:

Current VNL runner-ups France delivered a huge opening day performance by making very quick work of China in Pool B’s debut match-up, taking the game 3-0 (25-20, 25-21, 25-17). Stephan Boyer led the way with 23 points for the winners, including an eye-popping 11-points first set. Kevin Tillie finished with 10 points (10/12 hitting) and Earvin Ngapeth added 7, which is good news, as he is recovering from an abdominal muscle strain. For China, Chuan Jiang scored 10 points and Longhai Chen added 9 points (8/9) hitting. France hit 55% from the field, while holding China to a 44% performance. Next up for France will e a showdown against Brazil, while China will face The Netherlands.

France’s coach Laurent Tillie: “We were very focused in this match and we had a perfect game. The first match is always difficult, especially when you play against a good team like China. The last time we played against China we lost by 2-3, so we played really aggressive since we were afraid of this game, and we did it very good. All matches are important. We are ready for a good fight against Brazil tomorrow and we will see what is going to happen. We have very good players but we have to be prepared very well.”

France’s Captain Benjamin Toniutti: “It is never easy to start a competition, especially when it’s scheme is such that you can’t lose any easy points. It is very good for us that we managed to win by 3-0, it is really good to start like this. Of course we know that the way is really long, so we just have to rest and be ready for the match against Brazil tomorrow. I expect a really tough game tomorrow. I think both teams have respect for each other, so we know that it will be a really difficult game, really important for both teams. For me the feeling here in Bulgaria is a little bit strange because I have this memory from a couple of years ago, when we did not qualify for the Olympic Games in Sofia and it was really difficult. On the other hand, I keep the feeling from 2015 when we won the European Championship, so this is my good memory from Bulgaria and I hope to make another one after the end of our journey here.”

France’s Stephan Boyer: “The first game of each competition is hard, doesn’t matter which team is your opponent. Today was important to play clean and good, and to be confident. I think we did a great job. Now we have to rest for the big game tomorrow when we play against Brazil. We have played against them many times. They are a really good team, and for sure when it comes to the World Championship every team has worked hard to improve their level, so I am very excited to play tomorrow. We have to fight for every point until the end.”

China’s coach Raul Lozano: “We should have played better, France did and they deserved the victory. We did not play well in any of the aspects of the game – neither in attack, nor in reception. In general, we did not play well. If we want to play better against the Netherlands tomorrow, we for sure have to make some adjustments in our play.”

Current WCH champion coach Stephane Antiga (with the Polish squad in 2014) made use of a very balanced Canadian offense to hand The Netherlands a 3-0 (25/15, 25/23, 25/18) loss. Nicholas Hoag led the way with 12 points, while six other players contributed with 5 or more points, as the team hit 57% for the game. Dutch offensive wizard Nimir Abdel-Aziz was held to only 13 points in the losing effort, with no other teammate contributing in double figures, while the Dutch team only hit at a 41% hitting clip. Canada also had 8 aces to Netherlands’ only 2. Next up for Canada is Egypt while The Netherlands will face off against China.

Canada’s coach Stephane Antiga: I’m so satisfied with this opening victory against the Netherlands. It is really important win and the perfect start of the completion for us. The level of the teams here in Ruse is really high and in every single match you must play as good as possible in order to win. We went with great motivation, managed to be focused, and the most important thing is the result in the end – 3-0. Now we are looking forward to our next match against Egypt.

Canada’s Nicholas Hoag: “I think the big difference in the match was serve and receive. We served really well without any mistakes, put them in trouble and add a hard time running their offense. We also received really well, so starting like this is really important for us. I think winning the second set was the key moment for our victory. Even though we had some difficulties and they were playing better, coming back from a few points behind and winning that set made us a little bit relieved. We are going to have a big preparation for the match tomorrow and of course we hope for another 3-0 win.”

Netherlands’s coach Gido Vermeulen: “I think the team of Canada were stronger at the first and the third set but the second set we played a good game. However, at the end of the day they were the better team today. In the end of the second set we played really well in defense and our substitutes did a really good job to keep us in the game. But then, it is only one ball so you never know. I think we played a decent game. Tomorrow is a rest day for us, so we will prepare for the match against China on Friday.”

Netherlands’s captain Abdel-Aziz Nimir: “Of course we knew that it is going to be a difficult match because Canada is ranked sixth in the FIVB rankings and we are twenty fifth. We hoped to play a little bit better. They gave us a lot of pressure from the very first point in the opening set, and that was the key in this game. We just could not handle it.”

Brazil’s injury-riddled squad made quick work of Egypt, handing the African team a 3-0 (25-17, 25-22, 25-20). Wallace Souza led the way for Brazil with 12 points, as his team hit 63% for the day and was gifted with 25 points from errors by its opponent. Ahmed Abdelay had 13 points in the losing effort. Next up for Brazil is a much tougher test against France, while Egypt will face off against Canada.

Brazil’s coach Renan Dal Zotto: “I think we are in good condition and we are well prepared to play against France tomorrow. France is one of the best teams in the world and they are capable to play volleyball at a very high level. We have to play really well tomorrow, and to be focused on each element of the game if we want to win the match.”

Brazil’s captain Bruninho: “I think we started really well. We were very aggressive in the serve. In the first set the Egyptian team maybe did not play as they can. After that, in the next two sets, I think we did our best in block-defense. We made some mistakes in the block timing but after all we managed to win this match. For us it is really important to start like that. With this formula of the tournament each set is really important and we just have to continue this way. Tomorrow we will have a really tough match against France. Now we just need to rest a little bit and to focus on our next game. Each detail will be really important tomorrow. I think, we have to play better in defense. We have to serve like today, maybe even better. We must be aggressive and to try to make it difficult for them in reception because my colleague from the other side of the net, Benjamin Toniutti, is a great setter. I think this is the key for tomorrow.”

Brazil’s Isac dos Santos: “Opening matches are always complicated because there is a lot of pressure, but I think we played a decent game. It was a good start for us so we can go up during the competition. I expect a tough match against France tomorrow. They are really strong team but we are here to fight.”

Egypt’s coach Mohamed Moselhy Ibrahim: “Brazil is the Olympic champion, so it is always difficult to play against them. In the beginning, our players were very nervous and tense. Some of them are new players. In the second and in the third set we started to play better but Brazil continued to control the game, especially with their capabilities in serving. I hope my team is going to play better tomorrow and achieve some good results.”

Egypt’s captain Ahmed Abdelhay: “Brazil is a very impressive team for sure. They are the current Olympic champion. I think we did our best today. It was our first match at this competition and it was very tough for us. We have some young players and we tried to do our best, but we did not manage to achieve more against a such strong opponent.”

Pool B Standings After Day 1