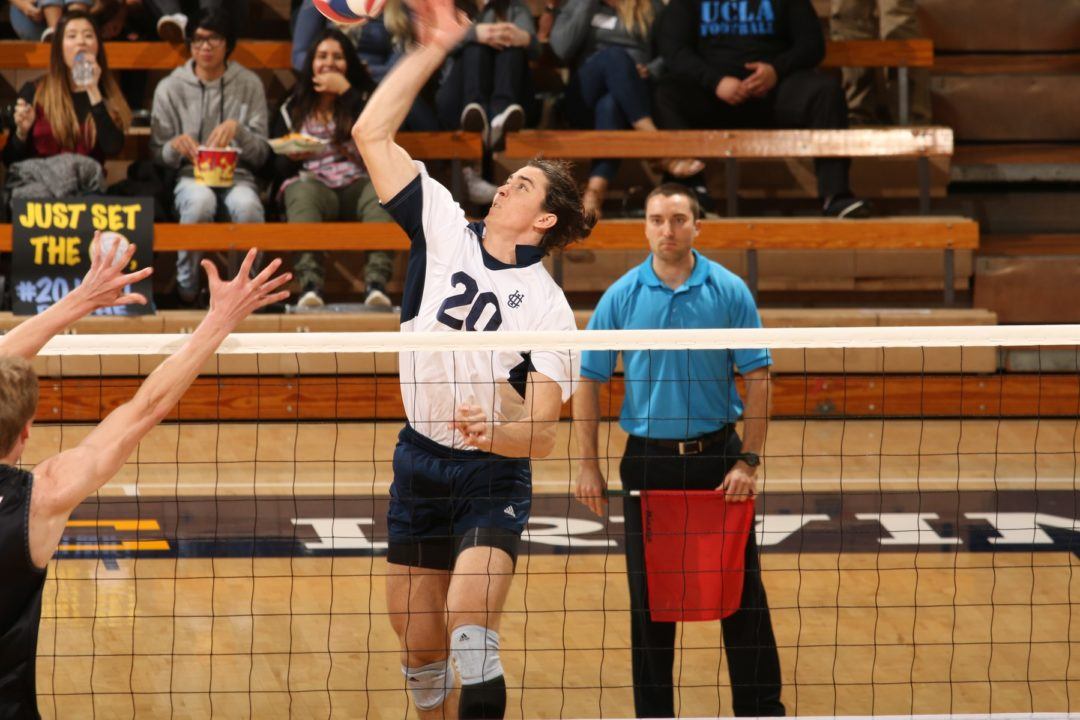 No. 5 UC Irvine won its sixth-straight match, defeating the No. 9 Cardinal in Palo Alto. Current Photo via UC Irvine Athletics

UC Irvine led Set 1 from wire to wire, save a tie at 20. The Anteaters led by seven at 8-1 and 12-5, but Stanford narrowed the gap to three at 15-12. The Anteaters answered with three straight points, prompting a Cardinal timeout. The break worked and Stanford eventually tied the set at 20-all on an ace. A trio of Stanford errors and a Hodges kill made it 24-22 UCI. A Stadick kill ended the set.

Stanford took the early lead in Set 2, going up 10-7. UC Irvine battled to take an 11-10 lead, but the Cardinal regained the advantage and went up three at 16-13. A pair of Hodges kills made it a one-point game at 20-19, but a Rakestraw kill gave Stanford a set-point chance at 24-22. Two more Hodges putaways kept the set going at 24-all. The Cardinal had four-more set point opportunities, last at 28-27, before UCI managed a 4-1 run to nab the 31-29 win. Stanford had two errors and gave up an ace in the final stretch.

Stanford led Set 3 from start to finish, taking a 4-1 lead and staving off the Anteaters the rest of the way. The Cardinal hit .474 in the stanza.

Stanford (11-11, 6-9) was led by Gabriel Vega with 13 kills followed by Kevin Rakestraw, Clay Jones and Jacob Thoenen with nine kills each.

UC Irvine started quickly with a 4-0 lead then a 7-1 advantage forcing an early Stanford timeout. With the Anteaters leading 11-4, Stanford went on a 4-1 run to close within 12-8, until a kill by Aaron Koubi stopped the momentum. A pair of kills by Stadick and an ace by Tamir Hershko pushed the UCI lead to 18-12 forcing another Cardinal timeout. Following the break, Stanford out-scored UCI 8-2 to tie the set at 20-20. The Anteaters would score the next two on Stanford errors and go on to win the set 25-23 on a Cardinal service error.

Stanford used a 4-1 run in the second set to take a 10-7 lead. The Anteaters would score the next four points on kills by Thomas Hodges and Matt Younggren, a block by Stadick and Michael Saeta and a Cardinal error, 11-10. In a set of runs, Stanford then scored four of the next five to go ahead 14-12. UCI would get as close as one four times, the last 23-22 on back-to-back kills by Hershko and Stadick. Following a kill by Stanford, Hodges put away two kills to knot the score at 24-24. After trading several points, Stanford’s third consecutive service error was followed by an ace by Michael Saeta to give UCI a 29-28 lead. After a UCI service error, a kill by Koubi and a Cardinal attack error gave the Anteaters the 31-29 win.

In the third Stanford would take control with an early 4-1 lead and never relinquish the lead, winning 25-19.

A kill by Koubi followed by two Stanford errors, the last a block by Stadick moved UCI in front 14-11. The Anteaters would score the final three points for a 25-19 victory.

The two teams will meet again next Friday (Apr. 7) as UCI finally returns home after a month long road trip.

Stanford welcomed back members of its 1997 NCAA championship team during a special ceremony between the second and third sets. The 2017 season marks the 20th anniversary of the Cardinal’s first men’s volleyball national title.

Freshman setter Paul Bischoff kept all of the Stanford hitters involved, dishing out 43 assists to go with five digs, four blocks and three kills. Junior libero Evan Enriques anchored the defense against the Anteaters with a match-high 12 digs, marking the 12th time this season he has reached double digits.

Redshirt junior Colin McCall, who started for the third time this season, hit .333 with seven kills on 15 swings with just two errors. He also notched two aces, three blocks and two digs. Junior Kyle Dagostino appeared in all four sets, serving for Jones. He finished with two digs and an assist.

Stanford plays its final regular season home match on Saturday against UC San Diego at 6 p.m. The Cardinal will honor Vega, Jones and McCall in a Senior Night ceremony after the match.