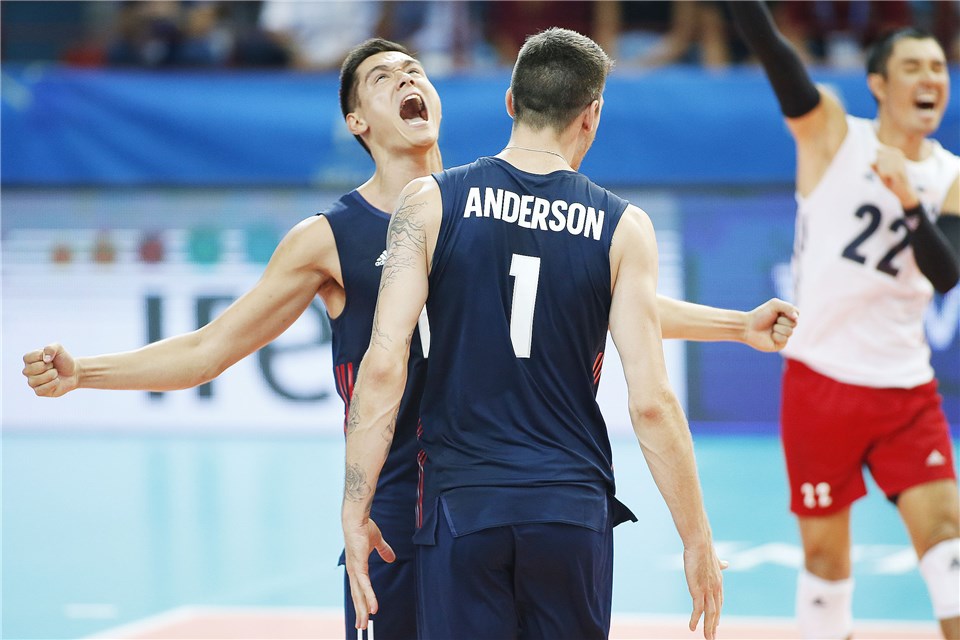 The United States top Russia in a match-up of teams ranked in the top 4 of the world. Serbia beat Tunisia to stay in second place of Pool C.  Current Photo via FIVB

Serbia fended off an early scare from Tunisa to remain at the top of the pool, though they still await a match-up with Russia. Two of the favorites of the the pool and the entire competition squared off, and the match did not disappoint. The United States defeated Russia in 4 tightly-contested sets to move to the top of the pool.

Coming into the match, Serbia felt the Tunisia might be an opponent they could rest their starters against. Coach Nikola Grbic stated, “Tonight I wanted to give a chance to those players who have not had the opportunity to play yet. Two reasons, mainly: to let the regular starting six enjoy some rest while offering the excitement to be a part of the game in this fixture to those players who have not had that experience so often.”

That approach backfired as Tunisia stunned Serbia in the first set while Marko Ivovic, Nokola Jovovic, Aleksandar Atanasijevic, Srecko Lisinac, and Marko Podrascanin all watched from the bench. All of these players made their way onto the floor by the second set (except for Atanasijevic), and Serbia took the next 3 sets to get the win and secure 3 points.

Uros Kovacevic, the left-handed outside hitter at Trentino in Italy, scored 14 points for Serbia.  He put away 12 kills and 2 blocks.  Kovacevic played the entire match for Serbia. Drazen Luburic played the entire match for Serbia. While he is usually not a starter, he is surely of a high-enough quality to start for most teams who do not have Atanasijevic on their roster. He led the match with 16 points on 16 kills while hitting 55%. Marko Ivovic contributed 11 points off the bench with 9 kills and 2 blocks.

Podascanin scored 10 points in the middle on 7 kills, 2 blocks, and had Serbia’s only service ace of the match. Lisinac had 9 points on 8 kills and a block with an 80% success rate in attack. While Jovovic was shaky at times in the Volleyball Nations League this summer, he set an efficient offense with a 56% attack average.

Tunisia relied solely on their opposite, Bongui Ali. He received 39% of Tunisia’s sets. He finished with 24 kills and a 56% hitting percentage. He also added a block to reach 24 points for the match. Omar Agrebi scored 7 points on 4 kills and a match-high 3 blocks in the middle. Amen Hmissi and Nabil Miladi both scored 7 points for Tunisia in the defeat.

After needing tie-breaks to win their first two matches of Pool C, the United States knocked off the tournament favorite in 4 sets to move to 3-0 and earn a full 3 points. “We have long been expecting this match-up,” said Micah Christenson of the United States. “We are very happy we won it against the team who are believed to be the strongest so far.”  The United States sits on top of the pool with matches against Cameroon and Tunisia remaining.

Most of the production for the United Stares came from the pins with Aaron Russell leading the charge. The new attention signing scored 17 points from 16 kills and 1 block. He posted a 69.6% attack average on the night. Matt Anderson was right behind with 16 points from the opposite position. He hit 59.1% on his way to 13 kills. Anderson, who plays outside hitter for Zenit Kazan during the professional season, also contributed 1 block and 2 service aces. Taylor Sander produced 13 points on 10 kills, 1 block, and 2 aces while hitting 47.6%

Coach John Speraw got 14 points from his middle blockers. Max Holt scored 6 points from 4 kills (hitting 50%), a block, and an ace. Taylor Averill got the start opposite of Holt and scored 2 points on 2 kills. He was replaced by Dave Smith in the second set. Smith chipped in 6 points in his first action of the competition. He finished with 5 kills and 1 block while hitting 83.3%. Micah Christenson scored 4 points on 2 blocks and 2 aces while setting the United States to a 57.0% attack average.

Similar to Christenson, Alexander Butko got balanced offensive production from the outside. Maxim Mikhailov put away 13 kills on 29 attempts (44.9%). Egor Kliuka and Dmitry Volkov both contributed 10 kills from the left side. Kliuka finished with 13 points after getting a block and 2 aces. Volkov added 2 blocks to total 12 points.

Dmitriy Muserskiy scores 13 points on the middle. Muserskiy, who will play with Suntory in Japan next season, scored on 8 kills, 3 blocks, and 2 aces. Artem Volvich started opposite of Muserskiy in the middle but was replaced after the initial set by Ilyas Kurkaev and did not score any points. Kurvaev scored 6 points on 4 kills and 2 blocks for the Russians.

The United States has qualified for the next round with this win. Russia has fallen behind Serbia due to Serbia having 7 points to Russia’s 6.  Those teams will play each other on Monday.