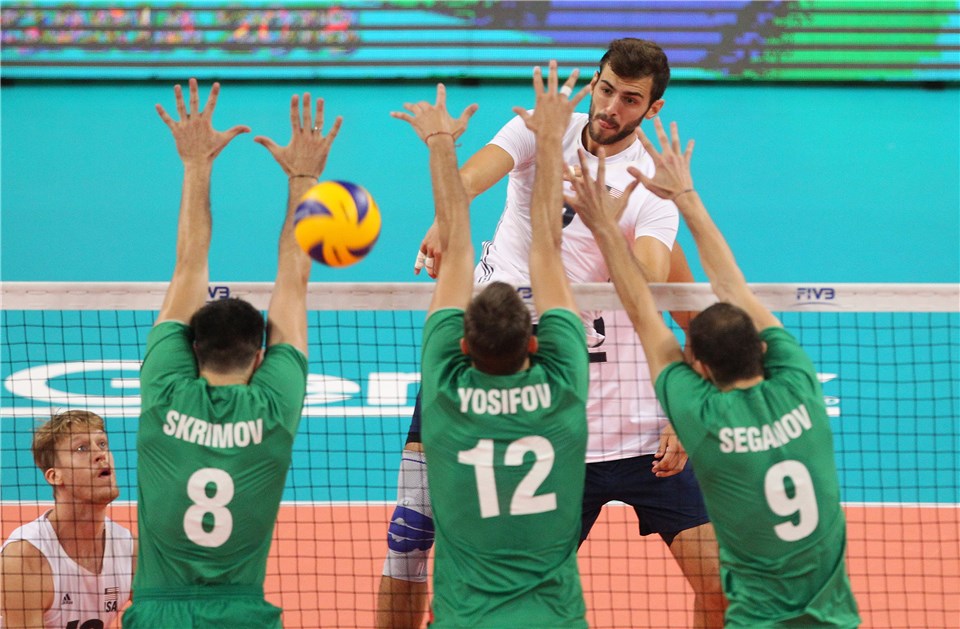 Aaron Russell put in a stellar performance against Bulgaria to clinch a spot in Round 3.  Current Photo via FIVB

The United States made quick work of Bulgaria in front of a rowdy home crowd in Bulgaria and clinched themselves a place in the Third Round. Canada‘s 3-match losing streak came to a halt with their 3-2 victory over Iran. That loss eliminates Iran from contention at qualification. Since it went 5 sets, Canada is no longer able to qualify for Round 3 either.

The United States faced a tough test against a hot Bulgarian side in Bulgaria and delivered like a team who is playing like they belong on the podium. It was only the third sweep the USA has had all tournament (the others coming against Cameroon and Tunisia). This win puts them at 7-0 and 3 matches ahead of the rest of the field on Pool G with just 1 match remaining. They earned a spot at the top of the pool and in the Third Round.

Micah Chrsistenson continued his world-class form by setting the United States to a 60.3% attack efficiency. He also contributed 3 points of his own from a kill, a block, and a service ace. Aaron Russell led the way from the outside hitter position with 16 points on 15 kills and 1 ace. He also hit 65.2% from the left side. Taylor Sander hit a comparable 62.5% from the left at the other outside hitter position. Sander, who will be playing at Sada Cruzeiro this season, finished with 12 points on 10 kills, 1 block, and 1 ace. Sander remains as one of the top passers in the tournament.

Matt Anderson only scored 11 points in the sweep. That is not a disappointing point total, but it is below the point production the United States had been accustomed to out of their starting opposite. Anderson scored points from 9 kills, 1 block, and 1 ace while hitting 47.4%. Erik Shoji has climed to the 6th position on the list of best passers and diggers after this match.

One story coming into the tournament was the inclusion of 5 middle blockers. Each match is has been interesting to see which combination is used by Coach John Speraw. Today he went with the lineup used throughout most of the 2016 Olympic Games: Max Holt and Dave Smith. Dave Smith scored 8 points on 5 kills, 1 block, and a match-high tying 2 aces. He hit an impressive 83.3% on the night. Holt chipped in 4 points on 2 kills and 2 blocks.

The United States was able to stifle the Bulgarian offense. They finished the match with only 22 kills (compared to 42 for the USA), and no Bulgarian player produced double-digit points. Todor Skrimov scored 8 points on 6 kills and 2 aces to lead Bulgaria. Though he only posted a 26.1% attack average. Nikolay Uchikov hit 54.5% from the right side to finish with 6 kills.  He was replaced in the 2nd set by Miroslav Gradinarov who scored 4 points on 3 kills and an ace.

Valentin Bratoev went 0 for 4 in attack and was replaced in the first set by Nikolay Penchev after only scoring 1 point on an ace. Penchev also only produced 1 point on 1 kill. Georgi Seganov set Bulgaria to a disappointing 32.3% attack efficiency.

“The Americans were like Monstars from Space Jam. We didn’t have Buggs Bunny and Michael Jordan,” said Bratoev about the United States. “Physically they are on another level. These guys jump half a meter above us.”

Canada started on fire with a 3-0 start, but had since lost their last 3 matches coming into Saturday. Their win in a tie-break halted their skid and puts them level on record with both Bulgaria and Iran as they look to reach 2nd place in Pool G. They found success by relying almost exclusively on their outside hitters as Sharone Vernon-Evans is going through some growing pains after his injury and while being on the biggest stage of his young career.

John Gordon Perrin and Nicholas Hoag put Canada on their back to keep them alive in the competition. Perrin, the captain, scored 31 points on 27 kills, 3 blocks and a service ace. This included a match-high 7 points in the tie-break. Perrin hit 61.3% in the win. Hoag was right behind with 27 points. His points came on 22 kills, 1 block, and a match-high tying 4 aces.

Daniel Jansen Vandoorn led Canada in the middle with 9 points on 8 kills and 1 block with a 66.7% attack average. Graham Vigrass scored 7 points from the other middle blocker position. He hit a perfect 100% on his way to 4 kills, 1 block and 2 aces. Vernon-Evans scored 2 points on 2 kills and was replaced in the 3rd set by Ryan Sclater, who scored 6 points on 5 kills and a block. Sclater was a perfect 5 for 5 in attack.

Amir Ghafour, who will be playing in Italy this season, scored 24 points for Iran. He hit 57.5% on his way to 23 kills and 1 block. Milad Ebadipour chipped in 18 points on 15 kills, 2 aces, and 1 block. Mousavi Seyed started slow with 3 points and was replaced by Amir Toukhteh who produced 4 blocks at the net. He also finished with 5 kills and 2 aces. Ali Shafiel scored 9 points in the middle on 9 kills.