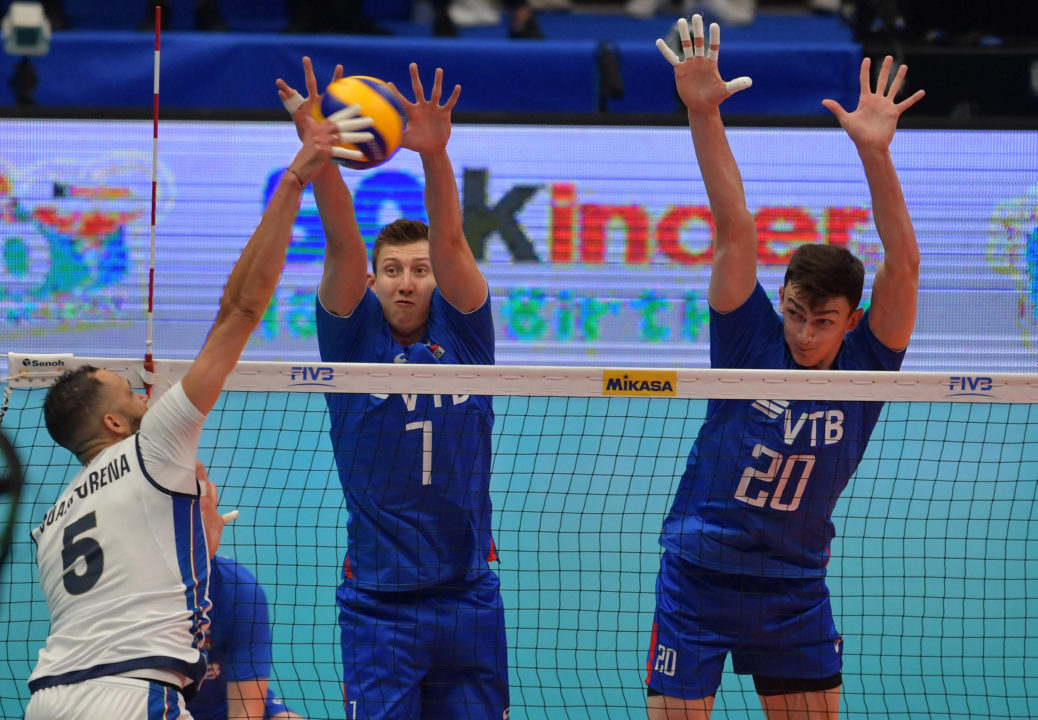 Russia topped Italy in five sets to hand the hosts their first loss of the FIVB World Championships. Meanwhile, Finland was eliminated from the race for the title with a four-set loss to the Dutch. Current Photo via FIVB

Russia topped Italy in five sets to hand the hosts their first loss of the FIVB World Championships. Meanwhile, Finland was eliminated from the race for the title with a four-set loss to the Dutch.

“I am happy with the way we played the match from a technical point of view,” Dutch coach Gido Vermeulen said. “We used a very efficient strategy with our blocks. Finland, in the second set, gave us a bit of a headache with their good serves, but we were able to regain confidence. I am very happy with all my players and each one of them gave their contribution towards achieving this win.”

The Dutch overpowered Finland at the net (15-4 in blocks) and from the service line (13-6 in aces). The Netherlands also boasted a 54-45 advantage in kills.

Urpo Sivula did all he could to guide the Finns, tallying a match-high 23 points (20 kills, 2 blocks, 1 ace). Sivula’s nearest help came from Niko Suihkonen, who managed nine points (8 kills, 1 block).

Nimir notched seven points in the opening stanza, lifting the Dutch to a four-point edge at 14-10. Sivula narrowed the gap to three at 21-18, but Nimir and Ter Horst closed out the win for the Netherlands at 25-19.

Finland turned things around in Set 2, cruising to a 17-10 lead as Suihkonen took control offensively. The Dutch clawed back into the set at 23-22. Sivula kept the Netherlands from completing the comeback at 25-23.

Nimir pounded down kills of up to 70 miles per hour in Set 4 as the Netherlands grabbed an 8-4 lead. Finland narrowed the gap to two at 9-7, but it was all over after that. The Dutch claimed victory at 25-13.

“Obviously there is great disappointment,” Sivula said. “Even if I played well, this does not make me happy since my team lost. Finland played good volleyball only for 20 minutes and this is not enough when you are competing in a World Championship.”

“First of all I want to thank my players and all the staff,” Russian coach Sergei Shliapnikov said. “It was difficult to play in front of such a huge partisan crowd and in fact, I needed to reassure my team because there was a lot of tension before the match. They were able to motivate themselves and I am very satisfied with the attitude they had during the match. I am aware that our fate depends on what happens between Italy and the Netherlands, but anything can happen in sport. We will try to do our best also tomorrow!”

In a continuing trend on Saturday, it was not a day for the host teams. First the United States downed Bulgaria, then Russia issued Italy its first loss. All was not lost, however, as the host side qualified for the Final Six.

The Russians used an 11-2 advantage in blocks to overcome a 55-49 deficit in kills in the close victory. Both teams managed nine aces and committed 34 errors.

Ivan Zaytsev recorded a match-high 21 points (20 kills, 1 block) and Osmany Juantorena added 16 points with 14 kills and two aces. Next on the team were a trio of players with seven points. Filippo Lanza notched his seven kills in just the first three sets before exiting the game.

Zaytsev and Juantorena paced Italy to a 17-13 advantage in Set 1. Russia pulled within two, but in the end Daniele Mazzone capped the 25-19 win for Italy.

Russia grabbed a 13-9 lead in Set 2 and held on for the win despite Italy slicing the margin to two at 15-13. The Russians went up 23-16 and Mikhailov tallied his sixth point of the set to secure the 25-18 win and even the match.

The Russians hit at a 60 percent efficiency in Set 3 and jumped ahead 18-12. Lanza exited the match for Gabriele Maruotti but could not help Italy salvage a win as Mikhailov wrapped up the stanza at 25-21.

“It is obvious that with teams with such heights we needed to have the patience to stay calm, something that we weren’t able to do after the first set,” Italian coach Gianlorenzo Biengini said. “We also suffered in defence but it is always difficult when dealing with serves like the ones of a strong team like Russia. I am however very happy about the qualification, but for now, we set aside the thought of Turin and think about our final match here.”