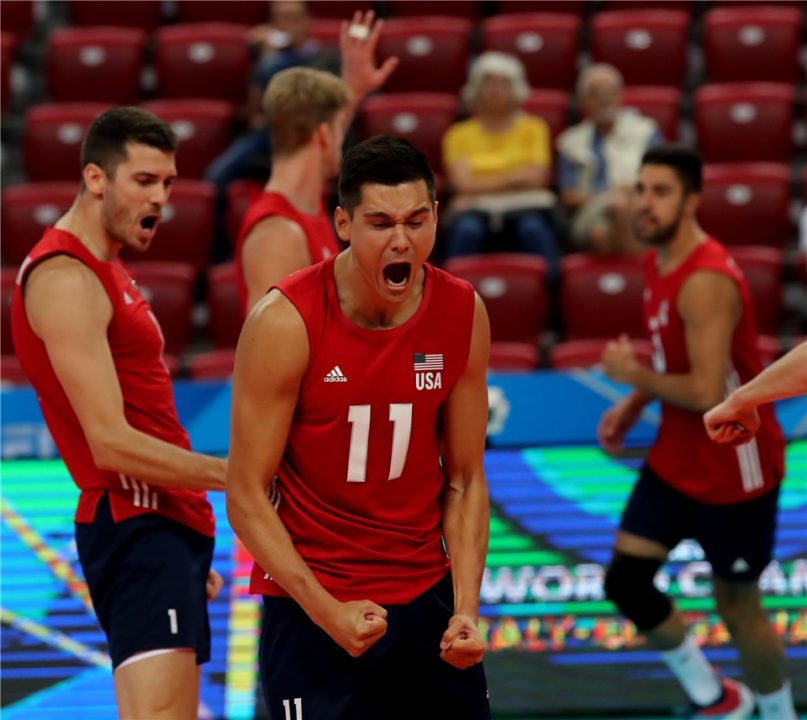 Micah Christenson set an efficient offense, and Matt Anderson led the scoring in a 3-0 win over Canada.  Current Photo via FIVB

The United States put a two-match cushion between them and the rest of the field in Pool G. They entered the Second Round with a perfect 6-0 record and recorded a 3-1 win over Canada. Bulgaria’s 3-0 sweep over Iran puts both of them at 4-2. Bulgaria holds a 12-11 advantage in standings points. The United States has an important match over Bulgaria on Saturday.

The United States beat Canada in series of lopsided sets, while surprisingly dropping the third set to keep them from the sweep. The USA hit a staggering 27 more kills than Canada (62-35), with 5 more blocks (11-6), and 3 more aces (5 to 2). The United States has been picking up momentum in this tournament, and Canada dropped their third consecutive match after starting the World Championships at 3-0.

Matt Anderson led players with 22 points for the United States. He hit 83% on his way to registering 20 kills. Anderson also added 2 blocks to his scoring total. Aaron Russell finished with 17 points from the outside hitter position on 15 kills and 2 blocks. He hit 75% for the match. Taylor Sander hit 50% in a 10-kill performance for the United States. He also contributed 3 blocks to finish with 13 points.

Max Holt led the middle blockers with 14 points on 8 kills, 4 blocks, and 2 service aces while hitting 75%. Coach John Speraw used Dan McDonnell and Dave Smith off the bench in each of the sets. McDonnell, the starter, scored 3 points from 2 kills and an ace. Smith came in as a substitute and scored 6 points on 5 kills and a block. Micah Christenson set the United States to a blistering 69.7% attack average.

John Gordon Perrin was the only player from Canada to put up double-digit kills. He contributed 15 kills with a 62.5% hitting percentage. Perrin also scored 2 points from blocks. Nicholas Hoag was the only player from Canada to produce double-digit points. The outside hitter scored 12 points on 9 kills, 2 blocks, and 1 ace. Sharone Vernon-Evans was essentially a non-factor for Canada. The phenom opposite scored 5 points and hit 33.3% on his way to 12 kills.

While Speraw is happy with Friday’s performance, he knows there is not much time to celebrate. “Tomorrow we will play against the home team,” said Speraw. “It’s going to be a huge crowd and I think it’s going to be difficult for us. We will rest tonight and we’ll see what is going to happen tomorrow.”

Bulgaria made a statement against the best team from Asia with a 3-0 sweep over Iran. This win puts them within striking distance to qualify for the Third Round as a runner up (they are currently behind Russia and Serbia), and it gives them great momentum heading into Saturday’s match against the United States.  The big factor in this match was that Bulgaria out-served Iran to a tun of 11-4 in the aces department.

Bulgaria got almost all of their production from the left side. Valentin Bratoev led the match with 18 points on 16 kills, 1 block, and 1 ace. Todor Skrimov, the other outside hitter, may be battling a calf strain, but he still scored 17 points. Skrimov finished with 10 kills and an astonishing 7 aces in the sweep. He had only 1 ace coming into the match and is now 10 on the list of best servers in the tournament.

Nikolay Nikolov led the way in the middle for Bulgaria with 9 points on 6 kills and match-high tying 3 blocks. Georgi Seganov scored 1 point on an ace and set Bulgaria to a 53.2% attack average.

Iran was led by 13 points from Milad Ebadipour, 11 of those coming from kills. Morteza Sharifi scored 11 points on 10 kills and 1 block on the night. Amir Ghafour, starting opposite, scored 12 points on 10 kills, 1 ace, and 1 block. Mousavi Seyed also put away 3 blocks to accompany 4 kills. Saeid Marouf set Iran to a 48.1% hitting percentage in a match where he uncharacteristically did not establish the attack through the middle effectively.

Plamen Konstantinov, coach of Bulgaria, also has his eyes on the match against the United States. “The USA makes a very strong championship and they are among the favorites to win the world title,” he stated. “But I hope we’ll have great support in Sofia and the fans will add what we lack.”