Brazil And Slovenia Start Off Round 2 Strong – Pool F Recap 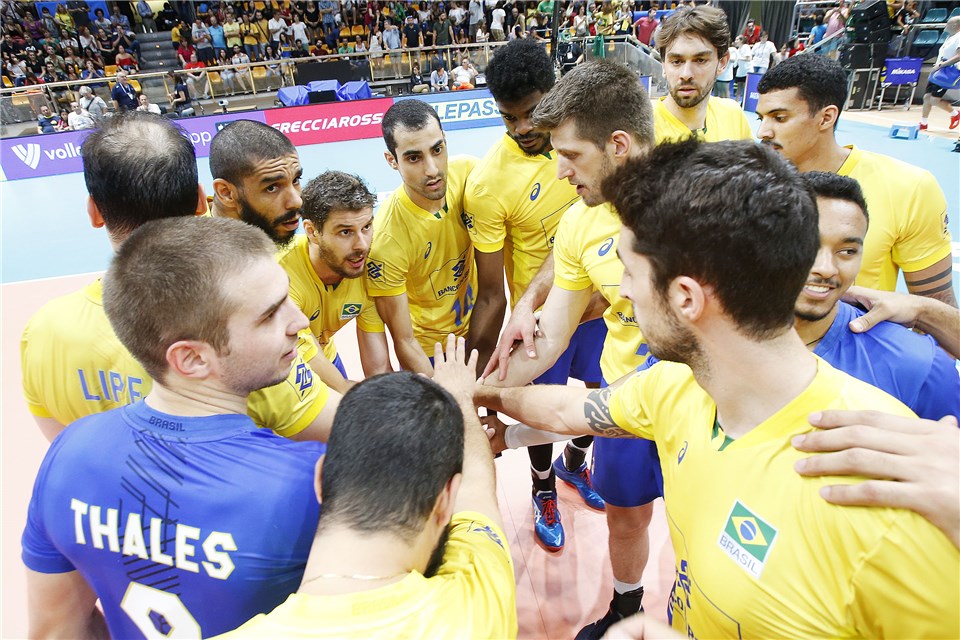 Brazil and Slovenia came out of the games screaming to start Round 2, taking their games 3-0 Current Photo via FIVB

Brazil and Slovenia came out of the games screaming to start Round 2, taking their games 3-0. However, the matches were not as easy as the end score would make it believe so, as Australia and Belgium kept the games very close, the latter even missing 2 set points in the first set of its game against Slovenia, showing the group’s parity. With the results, Australia is eliminated from the competition early. Here is the day’s recap:

Pool favorites Brazil started its Round 2 campaign by beating Australia 3-0. The game was no breeze though, as Brazil wasn’t able to open up comfortable leads in the first two sets and had to deal with the Australian squad breathing down its neck the whole time. At the end of the day, the Brazilian squad was just that much more experienced to come home with the win. Douglas Souza (13), Wallace Souza (12), and Lipe Fonteles (11) scored in double figures for Brazil, while Lincoln Williams scored 16 points in the losing effort. Australia was without its captain Paul Carroll for the match.

Renan Dal Zotto, Brazil’s head coach: “We are happy because of the result. It was very important. However, we can and we must play a little bit better, mainly in block and defense. We made the difference in the important moments and we kept calm to play the right way with the right mentality. It is important that we have players who take responsibility in the right moments – Wallace is one of the best players in his role in the world, Lipe gives us his great experience and Douglas, despite the fact of being younger, is not scared.”

Bruninho, Brazil’s captain: “It is no surprise that Australia played so well – they already have shown in the first round that they can be a tough opponent for the big teams. We knew that it was not going to be easy against them and we were aware that we had to perform extremely well. They were chasing us in the first two sets, we did not play so well in defense and this was our main problem. In the third set, we really showed them our good play in this component, and we could counterattack well. That was the key for this first victory.”

Mark Lebedew, Australia’s head coach: “I don’t think that we played very well. We played at the same level that we played in the previous week in Bari. For this reason, it was disappointing – that we kept the same level. We still cannot find the proper way to play against the top teams. We made a lot of mistakes. We had a great chance to win one or two sets – and we have to learn from this experience if we want to play at this level. We will try to be better in the next matches as the final standing is important to us and to our programme. Every point and every match matters.”

Lincoln Williams, Australia’s highest scorer: “We had our chances in the first two sets to win. In the third one we let off a little bit and being a great team, they just kept on playing their way. They were quite calmer than us and we gave them a way too many points. For the future, if we want to win, we have to stay calm, because we see that we have many opportunities in games against these elite opponents. We need to start to take our opportunities.”

Enjoy the best actions of the game as the Brazilians topped Pool F.#FIVBMensWCH #volleyball #volleyballWCHs pic.twitter.com/l6A6TJA36j

Slovenia and Belgium had a rematch of their Round 1 encounter, in which Slovenia won at the tie break. This time around, the score may have been 3-0 in favor for Slovenia, but the sweep doesn’t give justice to the Belgian squad, which kept the game very close at almost all times. Klemen Cebulj (17), Mitja Gasparini (14), and Tine Urnaut (13) scored in double figures for Slovenia, while Sam Deroo scored 14 points in the losing effort.

Slobodan Kovac, Slovenia’s head coach: “Everybody was talking about Belgium’s revenge, but we won. However, I am not so much content, because I think that our victory could be even with a better result, because it was a tied game. We made it difficult for our opponents, showing good skills on serve. We have developed until now, but we still have our chances to become better. Maybe we should be even more concentrated, because if we add this component, our play will be better.”

Tine Urnaut, Slovenia’s captain: “I am really happy because of this difficult win, because Belgium is a really good team. I think that the quality of our side-out was better than the one showed in the match in the first round. This was one of the main keys, because we really had difficulties in the previous matches. Our setter today played really good, really smart. He opened up the play, but we all showed team work today. Brazil is very good team. They are the Olympic champions, favourites in this group and maybe in the whole tournament. But we are focused on our side of the court – this is the most important thing. If we play on the level that we can, I hope that we can perform good and show our best.”

Andrea Anastasi, Belgium’s head coach: “We missed something today. They were very good on service today and it made it difficult to stay in the match. In my opinion we have to learn. We have to try to do better and better if we want to perform better. The match vs. Australia is important for us in order to finish well-ranked in the competition.

Belgium’s Pieter Verhees: “It was a tied game in the first sets. We were leading during all the time in the first two sets, with 2-3 points. We had even two chances to take a set ball 24-22 and we didn’t take them. At this level you pay for this, if you don’t score those balls. In the second set we put some more pressure on the serve, but we also made more mistakes, so it became easier for them. In the end of this set we came back, thanks to the good serve of Sam Deroo, we started to believe in it. But again the small details made the difference, millimeters that matter. We knew that this match was very important – if we were about to go to the next round, we had to had this victory. Now it becomes a really difficult to go ahead, but we still have a small chance to do so. We have to prepare our next matches and let’s see what happens.”