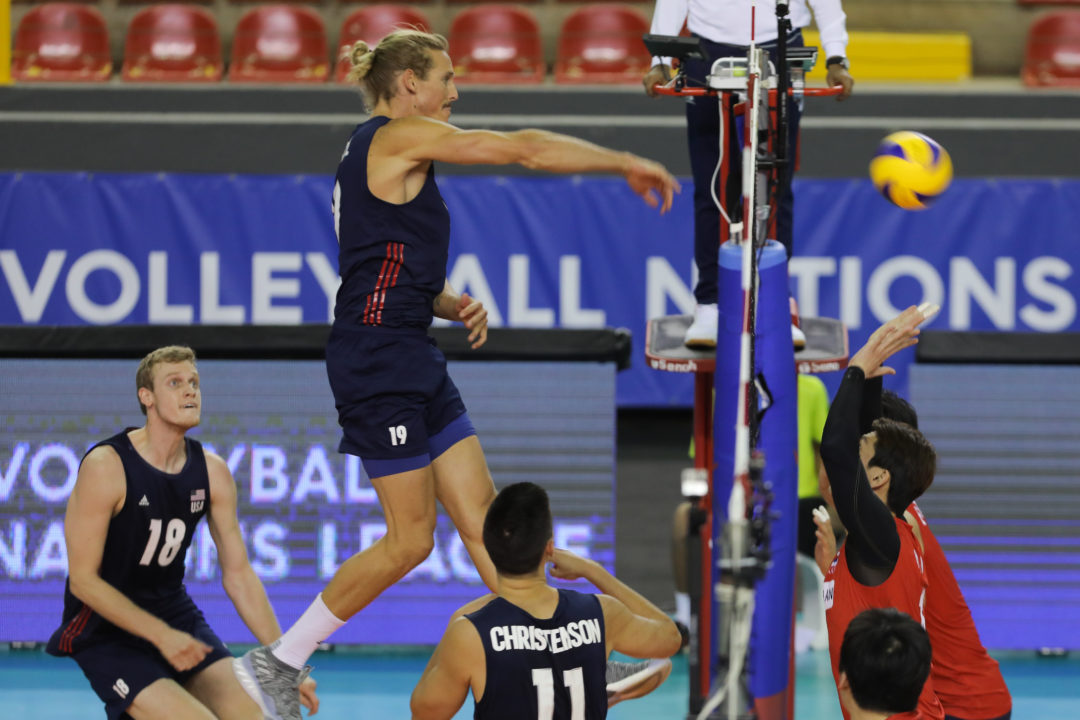 Taylor Averill had 6 points in 5 sets in the United States' opener against Serbia. Archive Photo via FIVB

In the latest permutation of a constantly-changing American men’s national volleyball team starting lineup, Taylor Averill got the start at middle blocker in Wednesday in the team’s World Championship opener.

Averill wasn’t on the 14-man roster for the United States at the Final 6 of the FIVB Volleyball Nations League earlier this summer, where in crunch time, Holt and captain David Smith got the starting nods at middle blocker. The 26-year old Averill stands 6’7″ tall, which is about an inch shorter, and 7 years younger, than Smith. If nothing else, the early rest, with the U.S. expecting to cruise through the preliminaries, could save the veteran Smith’s best matches for later in the tournament. While Averill was the weak link along the net for the USA, he did have a few clutch digs in key moments of momentum.

While the Americans continued to rotate starting lineups, they did stick with their starters for almost the entire match:

The only deviation was two appearances for Kawika Shoji as a designated server (which amounted to just 2 service attempts).

While in the preliminary rounds of the VNL saw constant changing and experimentation of lineups, this change shows that the US is ready to ride with its starters for these World Championships. Head coach John Speraw is also sticking with Matt Anderson at opposite (he plays outside hitter professionally, but has spent a lot of time at opposite with Team USA because of lack of depth at the position); and Aaron Russell and Taylor Sander at outside hitter. While the USA had success and lack-of-success with different mixes of hitters at different points in the Nations League, when push-came-to-shove (and when Sander returned from the birth of his child), the US looked at its best – including in a 3-0 sweep of Brazil in the bronze medal match.

In this lineup, Anderson swung early-and-often on his way to 19 points, though the Serbians sniffed him out and stuff-blocked 7 of his 31 swings. Russell (also with 19) had better timing with his setter Christenson than in previous matches.

Most importantly, that lineup brings better stability to the U.S. service game – an area where Patch has struggled. Sander led Team USA with 4 aces in the match, part of an 8-to-5 margin in that category. Whereas the US has had a number of momentum-killing serves over the last two-plus years, on Wednesday, they had a lot of momentum-building serves early in sets

The Americans will play Australia on Thursday, have an off day Friday, and finish preliminary play with Russia, Cameroon, and Tunisia. They will be heavy favorites in all of those remaining matches aside from Russia, the 2018 VNL champions. Teams need to finish in the top 4 of their 6 team pool to advance; in 2014, all teams with 2 wins moved safely through to the 2nd round of the competition.