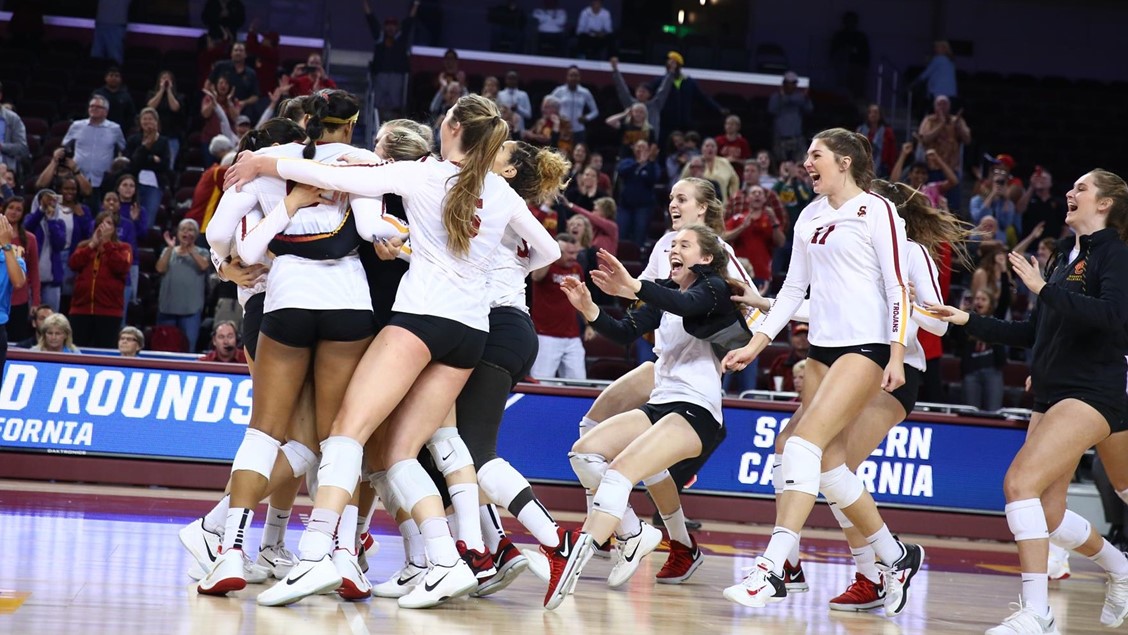 LOS ANGELES, Calif.– USC defeated San Diego on Saturday night in the second round of the NCAA Tournament in the Galen Center at USC. The USC Trojans have now moved on to the third round for the sixth time in eight years. USC will travel to Gainesville, Florida for the regional semifinals of the tournament next weekend where they will face Minnesota.

USC setters, Reni Meyer-Whalley and Cindy Marina, ran the offense for the Trojans with 32 and 19 assists, respectively. Meyer-Whaley added 14 digs for a double-double on the night. Khalia Lanier led the team in kills, putting away 23 balls on a .259 clip. Jordan Dunn also had an impressive performance with 7 kills and no errors on a .583 clip. The team posted 62 total digs on the night along with 14 team blocks.

Jayden Kennedy fueled the San Diego offense with 16 kills on a .204 hitting percentage. She was fed by setter, Kristen Gengenbacher, who recorded 51 assists and proved why she was the WCC Player of the Year by leading the team in digs with 19 for a double-double. The back row was controlled by libero, Lizzy Tardieu, as she dug up 17 balls.

The Women of Troy were led by sophomore outside hitter Khalia Lanier who collected 23 kills (8e, 58att, .259) to go with six digs, two blocks, and a service ace. It was Lanier’s third straight match above the 20-kill threshold. Senior opposite hitter Niki Withers tallied 14 kills (8e, 31att, .194) and added four blocks (one solo).

Defensively, the Trojans got 14 digs from junior libero Victoria Garrick, who became the 17th Trojan to reach the 1,000-dig mark in her career. Garrick was also just one assist shy of her second-career double-double. Sophomore defensive specialist Jenna Adams put up 12 digs and served one of the Trojans’ three aces.

The Women of Troy never trailed to take a 25-22 win in the first set. Despite the Toreros’ best efforts to fight back, USD could only tie the score three times, the last at 22-all. Withers’ tool-shot gave the lead back to USC before Lanier served up an ace for set point. Following another tough serve, Withers ended a furious rally with her fourth kill of the frame to sew up the win. The Trojans hit .286 in the first set and collected 13 kills (3e) on 35 swings. USD had 16 kills but committed nine errors for a .179 hitting rate.

The Trojans led by five points at 18-13 when Ford scored a kill down the line and Withers teamed with Geiger for the block, but three straight Torero blocks and a setting error by the Trojans brought USD within a point at 18-17. San Diego went ahead and the Trojans tied the score each time through 24-all before Roxie Wiblin’s kill gave the Toreros the final set point they would need. Another setting error sealed the Trojans’ fate in a 26-24 set-two loss. The Women of Troy committed nine errors and had 13 kills on 39 swings to hit .103 in the second set but were just a shade behind the Toreros’ .108 outing (12k, 8e, 37att).

USD led nearly the entire length of the third set including by seven points at 21-14, but the Trojans fought back to knot the score at 22-all on a massive 8-1 run culminating with back-to-back kills by Dunn and Abercrombie. The Toreros went ahead three more times despite kills by Lanier and Abercrombie to pull USD back into ties at 23- and 24-all before Kennedy’s kill got USD set point at 25-24. The Toreros closed the set with a block for a 26-24 win.

Lanier got two kills to sandwich another by Geiger as the duo helped the Trojans break a 19-all tie for a 22-20 lead in the fourth. Geiger later teamed with Abercrombie for the block and set point at 24-21. The Toreros saved one set point but couldn’t overcome their own errors as the Trojans completed a 25-22 win. USC had 11 kills in the fourth but hit just .167 (5e); but still out-paced the USD attack, which had 14 kills with 11 errors on 43 swings (.070).

The Toreros had early control of the fifth set, but the Trojans earned the third tie of the frame on a solo block by Withers at five-all. The teams traded barbs until USC stepped ahead for a 9-7 lead on a short 3-0 burst with a kill by Botkin, an ace by Meyer-Whalley, and a kill from Lanier. San Diego responded with a 3-0 run of its own to regain the lead at 10-9 following a kill by Kennedy. The Trojans took timeout and came out with a vengeance as Dunn and Abercrombie went back-to-back for kills and then combined for a block for a 12-10 USC lead. Fuller got the kill out of a USD timeout to stem the tide, but Abercrombie and Lanier earned back-to-back kills for a 14-11 match point before USD’s final error closed out a 15-11 win for the Women of Troy. USC hit .500 in the final set and had 11 kills (2e) on just 18 swings. San Diego had six kills and three errors (16att) for a .188 hitting rate.

USC HEAD COACH MICK HALEY
On his team’s fight from down, 2-1, to win in five sets
“This is a great win for us because we’re continuing to grow and get better. All the things that we’ve had happen to us during the season happened to us again during set two and three. No one knew who would win set four until right at the end and we started making the right decisions down the stretch and executed the right way. I was really impressed in set five. We had 11 kills on 18 attempts with only two errors. Even though we had some errors, we still came out on top. This is one that can really spring us for the regionals. We really need to know that we can do this and come back from deficits under pressure. It was nice doing it at home. Now, we’ll see if we can do it on the road.”

On the challenges that San Diego presented to his team
“[Jayden] Kennedy on the right side is a really fine player. We were finally able to close her down after a very effective first and second sets. Then, they started going to their middles and the left side, and we had to figure out how to get that under control. Throughout the whole match, I felt our serving was consistently strong and aggressive. I think that’s what eventually wore down the team yesterday (Central Arkansas) and helped us wear down USD today. San Diego is an extremely good team. They are worthy of that No. 9 coaches ranking. I was glad that the committee recognized us with the 10th seed, which I think we were both pretty equal coming in. You look at today’s match and you can see just how back-and-forth it was. Their setter was really good and they certainly did a lot of really nice things, but all-in-all, I think we had more firepower.”

On the impact that senior MB Jordan Dunn had on the match
“I have to tell you: if Jordan Dunn was healthy… you have to realize she never practices this year. She only plays in games. The thing that shocked me was that she was sick yesterday and I asked her if we should hold her out. She said to me, ‘coach – this is my fourth year and I’ve never played in an NCAA tournament match. I’ve always been hurt or sick.’ So she really wanted to play and was actually under the weather today too. But she was really good. That’s what a shutdown senior middle blocker can do for you. She can change the whole tempo of the game.”

LOS ANGELES, Calif. —The No. 9 USD Volleyball team (25-5) saw their season come to an end Saturday evening after falling to 10th-seeded USC in five sets (22-25, 26-24, 26-24, 22-25, 11-5). The Toreros, who had four players with double-digit kills, lost the first, but bounced back to take the next two before the Trojans closed out match by winning the fourth and fifth sets. All five sets were decided by four points or less.

Jayden Kennedy led the Toreros with 16 kills. Addie Picha, Lauren Fuller and Kaity Edwards all had 12 kills. Picha was a force at the net all night and finished with 10 blocks, one off her career-high.

Kristen Gengenbacher, the WCC Player of the Year, had a double-double with 51 assists and a match-high 19 digs. Lizzy Tardieu had 17 digs.

The Toreros didn’t hold a lead for the entire first set, but kept it close throughout and rallied to tie it up at 22-22. The Trojans then took the next three points to win the first set 25-22.

After having no blocks in the first set, the Toreros had six in the second set. USD trailed 18-13, but then strung together a 5-0 run fueled by three straight blocks from Addie Picha. The teams then alternated points all the way to 24-24 before the Toreros finally reeled off two straight to take the second frame 26-24. In total, the second set featured ten ties and the Toreros held the Trojans to a .103 hitting percentage.

The Toreros momentum carried over in to the third set. They scored the first three points and didn’t trail for the rest of the set and at one point held an eight point lead (11-3). However, the Trojans chipped away at the USD lead and eventually tied it at 22-22 and 24-24. The Toreros’ final two points of the set came on a Jayden Kennedy kill and a block assist from Addie Picha and Kristen Gengenbacher.

USC was led by Khalia Lanier’s 23 kills. Reni Meyer-Whalley had a double-double with 32 assists and 14 digs.

The Toreros end their fantastic season with a 25-5 record. They went 17-1 in conference play to win their first WCC Championship since 2013 and finished the regular season ranked No. 9 in the country. They swept the WCC’s major awards with Kristen Gengenbacher winning WCC Player of the Year, Roxie Wiblin winning WCC Freshman of the Year and Jennifer Petrie earning WCC Coach of the Year honors.