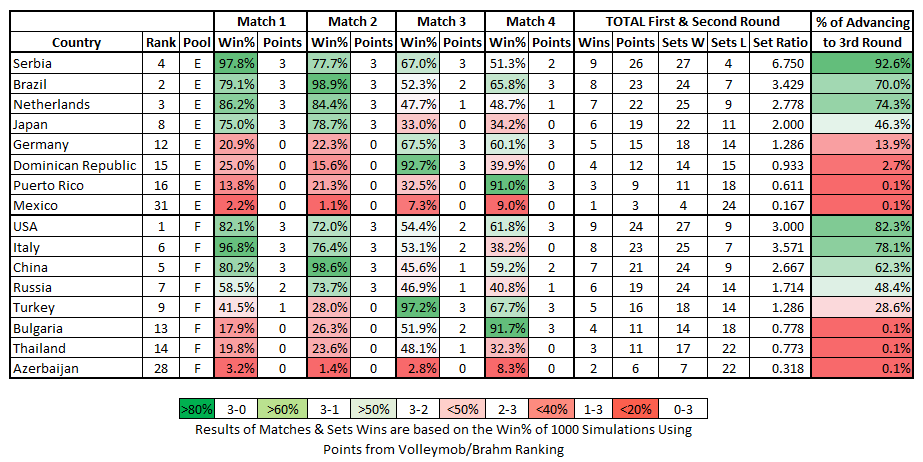 With the first round of the 2018 FIVB Volleyball Women’s World Championship in Japan now complete, we will do a... Current Photo via Jeremy Brahm

When looking back at our predictions for the teams that would make the second round, we were correct on 14 of the 16 (87.5%) of the teams. The two teams we had missed were Azerbaijan in Pool C, replacing South Korea and Mexico replacing Argentina in Pool A. With Mexico, their upset of Argentina and their set win against Cameroon in their opening day loss, gave them just enough on sets ratio to qualify over Cameroon and Argentina, as all were tied on wins (1) and points (3). Whereas South Korea got upset by Thailand in five sets on opening stay and then followed it up with a 3-1 loss before even facing the USA and Russia. Azerbaijan took care of debutantes Trinidad & Tobago to give them their two wins to advance to the second round.

Now moving onto the second round with Pool E. Only the top three teams from the second round pool make the third round. Serbia and the Netherlands will both start out at 5-0, Japan and Brazil will be at 4-1, Dominican Republic and Germany at 3-2, Puerto Rico at 2-3 and Mexico at 1-4. The first two matches have the top two teams from Pools A & D face the bottom two teams from those pools in a pool swap. So Pool A teams will face Pool D teams in this round. Serbia, Netherlands, Japan and Brazil are all expected to win by 75% or more in these games. That would put Serbia and the Netherlands at 7-0, Japan and Brazil at 6-1 and all but eliminate the remaining teams in Pool E. The final two matches are the top two from each first round pool (and the bottom two from each pool in the other matches). Serbia is favored against Japan and Brazil is favored against the Netherlands. If those results hold, Serbia would be in the second round at 8-0 (est. 24 points), Netherlands at 7-1 (est. 21 points), Brazil at 7-1 (est. 20 points) and Japan at 6-2 (est. 19 points). Serbia would be favored against the Netherlands, but may not play their starters, giving the Netherlands a win. We have not taken this into account in our model as the points, have no way of knowing over 4 years, starters vs. non-starters. So, the winner of Brazil vs. Japan would be for the third position in Pool E. Brazil is the favorite to win this match, and the hosts would be eliminated. My three teams from Pool E are Serbia, Netherlands and Brazil.

As for Pool F, again only the top three teams from the second round advance to the third round. Italy and USA at 5-0, China and Russia 4-1, Turkey and Thailand 3-2, Bulgaria and Azerbaijan at 2-3. The first two matches have the top two teams from Pools B & C face the bottom two teams from those pools in a pool swap. Now Italy and China should not have difficulties with Thailand and Azerbaijan, and the USA and Russia will not have a problem with Bulgaria. However, Turkey will be the wild card in the first two matches. This is due to Turkey’s play in the VNL this year. Against the USA, the USA is a 72% favorite, while against Russia, Russia is a 58.5% favorite. As both the USA and Russia dropped points from five set matches in the first round, any dropped points or losses will harm their chances for the third round. So the Turkey matches at the beginning could push Italy and China into the third round. Yet, if the predictions hold, Italy 7-0 (est. 21 points), USA 7-0 (est. 19 points), China 6-1 (est. 18 points) and Russia 6-1 (est. 17 points) would have nearly eliminated the remaining teams. In the swapping of the top two teams, USA would face China in match 8, while Italy face Russia. We think that the USA and Italy will win in five sets and take them to 8-0 and clinch their spots in the third round. China and Russia would be at 6-2 and so the winner of the head-to-head on the final day would take the last berth for the third round. China is a 59.2% favorite to take the match. So my predictions for the three teams from Pool F are USA, Italy and China.