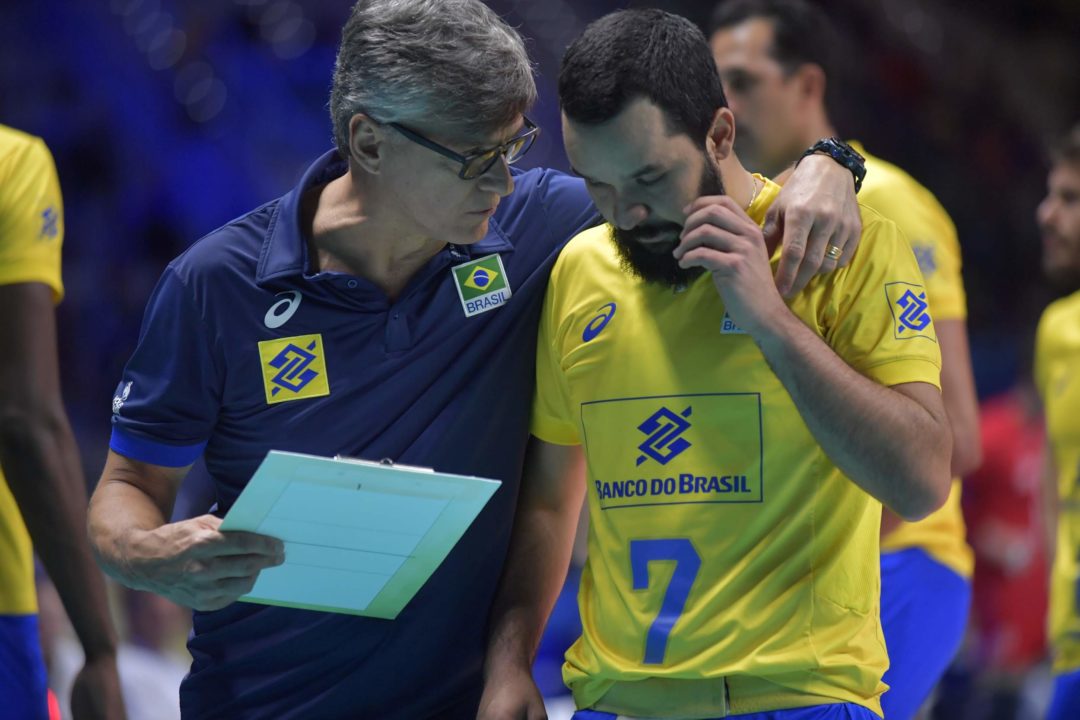 The choices that Brazil makes about the setter position could determine whether they advance to the final of a 5th-straight World Championship. Archive Photo via FIVB

In Nations League play earlier this summer, Brazil dominated Serbia in both of their matchups: once in the preliminary rounds, and again in the Final 6, and on both occasions the outcome was 3-0, and in both cases, it was two-way domination: holding Serbia to 40 and 41% hitting, and themselves hitting 52% and 55%, respectively.

But the Serbian team seems to have had a fuse lit under them at this tournament. The underdog of the final 4, Serbia has been really good in this tournament – including pushing the US men to 5 sets. Aside from a pair of 3-0 hammerings at the hands of Poland, including in the Final 6 match where they could’ve guaranteed themselves a spot in the Final 6 by even winning a set.

But Brazil, too, is stronger since those losses, including with the return of outside hitter Lipe, who missed the Nations League matches but is now healthy and scored 15 points (13/24 hitting) in the big Final 6 win over Russia.

Brazilian coach Renan Dal Zotto has a big decision to make (now that he’ll be allowed back on the court after being suspended for the team’s closing match of the Final 6). Who does he start at setter? Bruno has been the team’s rock at setter and captained his team to the 2016 Olympic final. 39-year old William Arjona, who was the backup at the 2016 Olympic Games, came in against Russia in the opening match of the Final 6 and won the last 3 sets to give his team a 3-2 tie-breaker win.

William played against the US, but there again, it was a match without much meaning for either side, and a lot of backups played. Brazil won 3-0, but its hard to read into either performance (or intent) of that performance and the setter.

Serbia has the hot hand, Brazil has the pedigree. My prediction: Bruno starts for at Brazil, lives on a short leash, and the South American side wins in 4.

Throw out the Nations League record. Poland wasn’t the same team, and isn’t the same team, without Michal Kubiak. That was shown during the Nations League, where they were 1st when he went out with a case of chronic pink eye, and barely snuck into the Final 6 thereafter. In this World Championship tournament, it’s been largely the same story. They’ve been unbeatable with Kubiak on the court. When he’s been sick, they haven’t won.

Against Italy, Kubiak, who only played 1 set (all Poland needed to advance), was healthy and happy, back in Italy after a number of complaints about Bulgaria, where Poland played the first 2 rounds of the tournament.

That’s good news for Poland. If Wilfredo Leon were available, bet the house on Poland repeating as World Champions. As it is, they seem really good, when healthy and fully engaged on the court.

The Americans have done what the Americans do: after a summer of rotating lineups, and seeming upheaval, and lots of ‘experience opportunities,’ the Americans have found their rhythm when it counted most. After a shaky start to the tournament, they made it to 9-0 before losing with their reserves in a meaningless game with Brazil on Friday.

None of the picks are easy at this level, but this match feels like it’s going to either be a blowout, or a 5-setter. Either one team won’t show up and play to their ability, or both teams will play to their abilities and it will be a knock-down, drag-out.

With both teams having an opportunity to rest a little in the Final 6, we’ll lean toward the latter.

In a 5-setter, I have to give the edge to the Americans, as they’ve won both opportunities they’ve had at them in this tournament, while Poland lost both of their 5-set tournaments.

Hi. It was exceptionally close prediction except the last set.
I think USA team designated their reserves for the match with Brasil counting on the good record against Poland in the last few years.