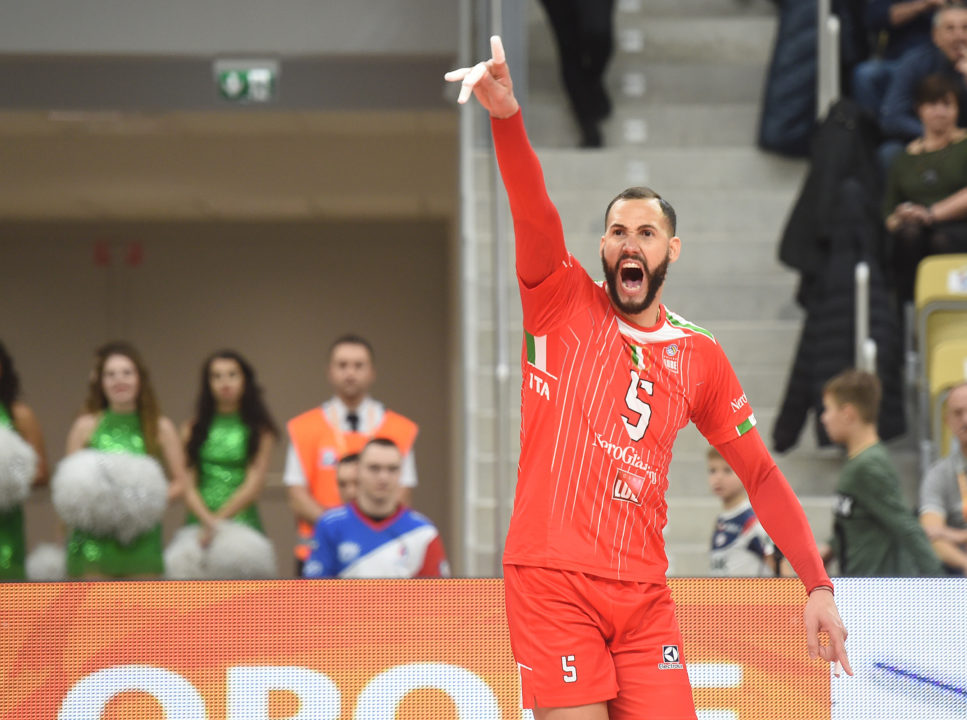 Pool play is finally done in Lodz and Opolo and the four best teams of the tournament will now move on to Krakow to go head to head in the tournament’s semifinals. Only the best of the best remain, and fans will be treated to two amazing volleyball duels when Zenit Kazan takes on Cruzeiro and Lube goes against on Skra. Four teams, from four different countries, ready to battle for volleyball gold. Below, you’ll find information from all of the day’s action.

Performance of the Day: Osmany Juantorena

Juantorena won MVP awards in the 2010, 2011, and the 2012 FIVB Club World Championships. Now, at 32 years old, he is playing like a youngster. In today’s game, he was unguardable at the net, scoring on 19 of 24 tries for an absurd 79% hitting percentage to go along with four aces to total 23 in only three sets of play. We won’t be surprised if he takes home his fourth MVP award this year.

Team of the Day: Zenit Kazan

Zenit Kazan ended group play with yet another 3-0 win, this time over helpless Skra. The team ended its group run with 100% efficiency, not dropping a single set along the way, and with its players leading most statistical categories individually. Zenit has been dominant, and now will have the chance of fighting nemesis Cruzeiro in the tournament semifinals.

Reigning Brazil and South America champions Sada Cruzeiro of Contagem are back on track to defend their world title here in Poland, after sweeping hosts and Polish champions ZAKSA Kedzierzyn-Kozle 3-0 (25-13, 32-30, 25-20) to claim the last remaining ticket to the semifinals of the 2017 FIVB Men’s Club World Championship – much to the disappointment of yet another delightful sellout crowd at Opole Arena.

After having played ten sets on the opening two days, ZAKSA simply failed to live up to the task and crumbled before a vastly improved and impressive today Sada Cruzeiro. Only in the second set did the hosts put up any resistance to the world champions, but missed out on four set points to tie the overall score at 1-1.

Yoandy Leal with 19 points and Evandro Guerra with 17 paved the way for the Sada Cruzeiro success, as the Brazilian side pounded their opponents from the service line and were also highly more efficient in attacking.

Marcelo Mendez, Sada Cruzeiro Coach: “Good luck to ZAKSA in the PlusLiga. I’m happy we improved our play. I think now we play good volleyball, our serves improved and our attack as well. Now we need to prepare for the semifinals.”

Filipe Ferraz, Sada Cruzeiro Captain: “I want to thank all the people of Opole for such a great reception here. Today my team played a very hard match, but also played very well. I am glad we are growing at this point of the tournament. We are prepared to play against Zenit or Skra, and I think it will be a good match. Thank you to ZAKSA’s captain for the kind words about us.”

Andrea Gardini, Zaksa Kedzierzyn-Kozle Coach: “First of all, let me congratulate my friend Marcelo. He’s a great friend and a great coach. Today we could see why they are champions. What can I say about the match – great service by our opponents, that’s why we had problems organising our play. We wish all the best for Sada and again congratulations.”

Benjamin Toniutti, Zaksa Kedzierzyn-Kozle Captain: “First of all I want to congratulate our opponents and wish them good luck in Krakow. We regret the result of the second set, if we had won, the match might have finished differently. But Sada deserved the win, and today we could see why they were club world champions three times. I’m very curious about the confrontation with Zenit now. What to say about us – we need to think positive, this has been a good experience for us, and apart from losing those two sets to Sarmaye Bank, we played our style of volleyball. Today, the other team was better, but the season is not really done, we need to continue playing in this way.”

Leaving the FIVB Volleyball Men’s Club World Championship with at least one win proved to be a high stake for China’s Shanghai Golden Age and Argentina’s Personal Bolivar. Without a shot at making the semis, the two sides engaged in a five-set battle in their last Pool B game at the Atlas Arena in Lodz, with the Asian rookies scoring their historic first victory, twice coming back from a set down on the way to a 3-2 (22-25, 25-20, 23-25, 25-18, 15-13) win.

Argentina’s Facundo Conte contributed 20 points, including four aces, to Shanghai’s victory to become the best scorer of the match. Personal Bolivar’s Rozalin Penchev is next on the chart with 18 points.

For the Argentinean team this was the second time they meet an Asian opponent at the Club World Championships, after losing to Iran’s Paykan Teheran in the 2010 bronze medal match, also in five sets.

Facundo Conte, player of Shanghai Golden Age: “We came here to learn and enjoy the atmosphere. It was a great lesson for us, so we are more than happy with the final score.”

Julien Lyneel, player of Shanghai Golden Age: “It was a good way to develop volleyball in China and I hope we can continue this way. It is nice to win.”

Javier Weber, coach of Personal Bolivar: “We are a bit disappointed, because we were close. It was not good that Shanghai made so many successful shot in our direction.

Lube join defending champions Sada Cruzeiro of Contagem in advancing from the Opole pool to the semifinals of the competition, where they meet local favourites PGE Skra Belchatow who finished second in Pool B in Lodz.

Giampaolo Medei, Cucine Lube Civitanova Coach: “First, let me congratulate the Iranian team. They played a good match without two important players. They didn’t have anything to gain in this match, but they played very aggressively. For me, it is not normal to be this aggressive in such a situation, so congratulations. This match was difficult for us, because we were a bit tired. My team played well, especially in set endings. We finished first in our group, which allowed us to gain winning mentality, and I hope we’ll play in the semifinals with the same mentality, with the same mood.”

Dragan Stankovic, Cucine Lube Civitanova Captain: “It was another important victory for us in an important match. We finished the group in first place, and it was a very difficult group. Today, we played against an opponent who lost their chance to qualify yesterday, but we knew they would try to win and we did our best to stop them. Our defence and attacks after defence made the difference. We served well in important moments, especially at set endings.”

Mostafa Karkhaneh, Sarmayeh Bank Coach: “First of all, we are very happy to have been able to participate in this tournament. It was a very good experience for us. We played in a difficult group in comparison to the other group. Lube had Juantorena, a very useful player, who served very well, and we lost very closely in three sets. We didn’t have any chance to qualify to the semifinals in this match, but we tried to do our best, and lost only in set endings. Next year we’re also going to represent Iran, and to take part in this tournament will also be a great experience for us. We have to improve our attack and defence systems to be more successful. Next year in Poland we will be stronger and we will use the experience we gained here. I congratulate our opponent for having the best volleyball stars in your team, and we hope to see you play in the final.”

Adel Gholami, Sarmaye Bank middle blocker: “First let me congratulate our opponents. It was a very good match. We gained a lot of experience, although we lost, but we fought Lube in every set.”

Zenit Kazan topped the final standings in Pool B at the FIVB Volleyball Men’s Club World Championship without dropping any sets in their three matches. In the last match of the pool, in front of the packed stands at Atlas Arena in Lodz on Thursday, the Russian standout shut out home favourites from Skra Belchatow for a well-deserved 3-0 (29-27, 25-20, 25-16) victory, leaving the opponents in the runner-up position before Saturday’s semis.

Wilfredo Leon Venero hammered out 20 points for the victory to top the scorers’ chart of the match. With half that count, Mariusz Wlazly was Skra’s most prolific player.

After three defeats from Skra and one from Jastrzebski Wegiel, this is the first time in the history o the Club World Championships Zenit manage to come out victorious against a Polish opponent.

Vladimir Alekno, coach of Zenit Kazan: “We were looking for a game against Sada Cruzeiro for a whole year. First of all we are happy that we are going to Krakow, and then we are happy we have the chance to face the Brazilian team again.”

Alexander Butko, captain of Zenit Kazan: “We are really glad we achieved the victory. It was a special test. We had seen the many faces of Skra, so we were ready for a tough match. In Lodz the organization was great, so it was a pleasure to play here.”

Roberto Piazza, coach of Skra Belchatow: “We tried to put our passion on the court and we wanted to put our hearts in the game. It is difficult to play against Zenit. For me they are the best team in the world. I asked my team to play their best tonight. We did not think about the fact that we had the ticket to the semis. If we want to take a step to the future, we need to know that we are able to fight with the strongest team in the world.”

Mariusz Wlazly, captain of Skra Belchatow: “The game was very tough. For us it is really important to play against teams like Zenit. It is the way to improve our performance. We made a lot of mistakes. Zenit used them and led in the match. We tested our level and we know what we can do on the court.”

Karol Klos, player of Skra Belchatow: “In the first set we truly fought. There was no pressure, but then Zenit destroyed us with their serves. We had our chances, but when playing against such a team, we cannot afford making mistakes if we want to think about the victory.”