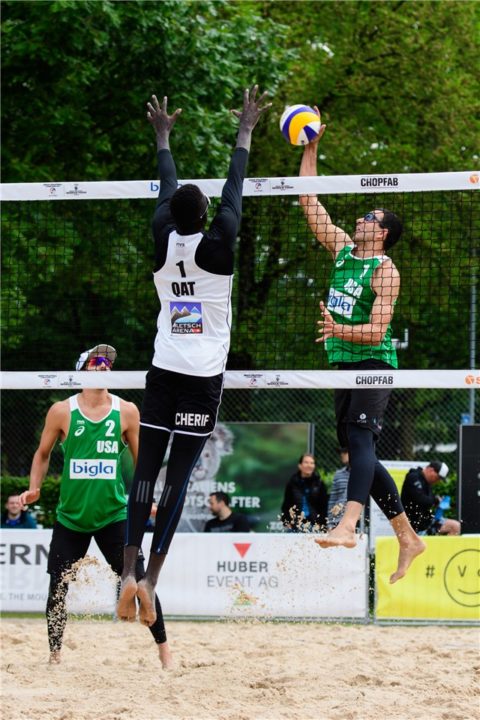 As the 2018 FIVB beach season winds down, VolleyMob sat down with a few standout players to get their take... Current Photo via FIVB

What follows are 10 questions with the 32-year-old Kolinske. VolleyMob will share Evans’ answers in a separate story.

1. What drew you to Kerri Walsh Jennings, p1440 and the sponsorship? What difference has that made for you on the FIVB Tour and beyond?

Players cannot make a living playing this sport besides the top 4 teams. For the rest of us, it is a cool hobby and I do not believe that is how it should be. As time passed, p1440 developed through people that had the same vision and belief in the sport that I did, so I was thrilled to join with them. Kerri and Casey have been a great example—inspiring me to go all in with the sport. I love how the p1440 team works so hard to make this sport better to allow more opportunities for the players to call this their career. The p1440 sponsorship has been huge for Miles and I to pursue our dreams on the FIVB tour. It has allowed us to travel the world and compete against the best. I have learned so much from this season and looking forward to much more to come.

2.  Bill, you partnered with Casey Jennings on the beach tour? What was he like to play with? For both of you, what have you learned from veterans of the game like Jennings and others?

Casey was so much fun to play with because he has such a fire and passion for the game. He spent so much of his time teaching me about the game and gave me the belief and confidence in myself on and off the court. He was the hardest working player that I have ever been around and just seeing that dedication each day taught me how to train like a professional. He is a great friend and the most influential person in my volleyball career.

3.   Men’s beach volleyball in the United States has been in flux over the last few years amidst several partner changes and with Phil Dalhausser/Nick Lucena carrying the banner. What are your thoughts on the state of American beach volleyball today?

I think the US has many great teams led by our veteran teams on the FIVB. I think on the men’s side, there needs to be more development with the younger players to catch them up with the rest of the world. I think the rest of world is very talented and the competition is getting better and better. On the women’s side, having collegiate beach volleyball is helping them get great coaching and it is showing with how well they are getting at such a young age. I definitely believe that p1440 is going to help grow this sport in so many ways for everybody. The talent in the US will only get better when we can call this our job and more players can fully commit to reaching their full potential.

4.  Since teaming up, you have had a variety of results over the last year, including podium finishes in Sydney and Aalsmeer last fall and top 10 efforts at the Lucerne and Haiyang Three Stars? What has been the key to your success?

I think Miles and I complement each other on the court really well.  He has a great passion for the game and really wants to make this his career.  This year was our first year on the FIVB and we are learning a lot about what it is going to take to get to the highest level. Playing against some of the best in the world and being in these situations will only help us to get better.

5.  You have played several of your American cohorts on the FIVB Tour, including at the Vienna Major. Is there a different mindset when you are playing a team you are more familiar with?

I think when you play another American team, it just means that you both know each other really well and just comes down to who can execute their game plan the best.

6.  How has your partnership changed since you joined forces?  What are your goals for the future?

I think our partnership has changed in that we now have a better understanding on how much time and commitment to the game it is going to take to compete at the highest level. The experience on the FIVB has shown us our strengths and weaknesses and what we need to improve to be able to compete at the highest level. Our goal is to continue to improve and get better each day.

7.  Talk about your partner and what he brings to the table. What do you value in your partner?

Miles is a very talented and skilled player that is only going to get better.  He is a very athletic defender that has great ball control with the power and finesse to hit a variety of shots.  I am very grateful that Miles is willing to go all in and pursue the FIVB.  It is very expensive to travel to all these tournaments and you really need to believe in yourself to do this. Many players are not willing to take that risk.

I am a huge Detroit Lions and Michigan Wolverines fan.  My partner loves bad weather with lightning and storms.  It’s the happiest I ever see him.

Qualifying for the AVP at Bradford Beach in Milwaukee, Wisconsin, with Dave McKienzie (July 3-6, 2014 – finished 9th).  It was awesome to have all my friends and family there to cheer me on.