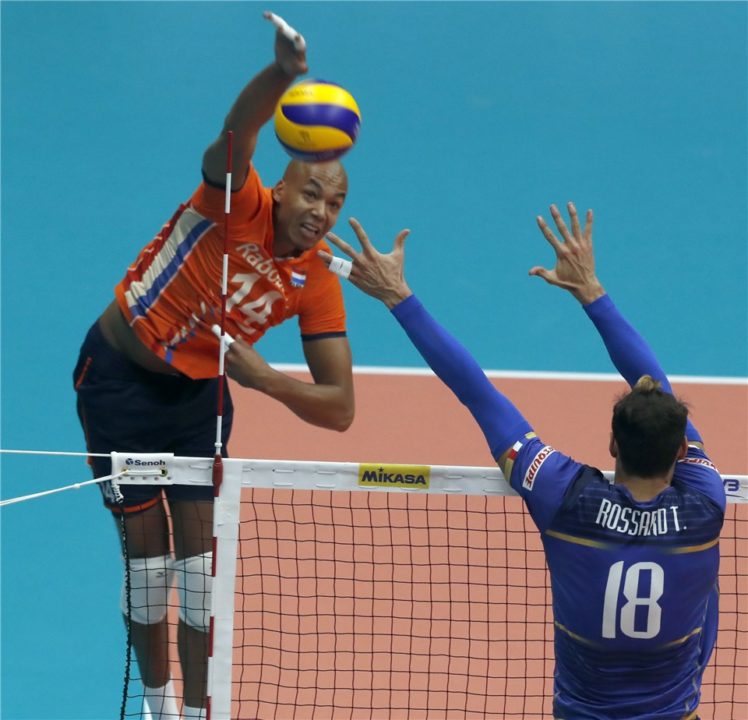 Nimir Abdel-Aziz willed the Netherlands to a 3-2 over France on Sunday.  Current Photo via FIVB

After Day 6, many of the pools are taking shape, and more teams find themselves booking flights back home. .

MATCH OF THE DAY: NETHERLANDS VS. FRANCE

Dutch captain Nimir Abdel-Aziz started the game on fire, scoring 2 straight aces and allowing the Dutch team to open up an 8-3 lead. The team quickly saw its lead balloon up to 10-3, as it scored 4 service points in that short game span. The Dutch team continued to dominated and had a 22-19 lead, but were unable to close the set, as the French squad went on a 6-1 run. The Dutch squad felt the blow after losing the first set in absurd fashion, and gifted the French with an easy second set win. However, The Netherlands was determined to fight back and not let the game become a typical easy 3-0 win for the French team, and powered its way to a comfortable 3rd set win. It then gritted and gutted its way to a 4th and 5th victory to close the game.

Abdel-Aziz led the way with 31 points on 26 kills, 1 block, and a match-high 4 blocks. Maarten Van Garderen came off the bench to score 12 points from 10 kills and two blocks with a 71.4% hitting percentage. Michael Parkinson led with match with 5 blocks after coming off the bench in the 3rd set. Stephen Boyer had 21 points in the losing effort. Earvin N’Gapeth  finished with match with 17 on 16 kills and 1 block from the left side. The French squad was once again its starting middle-blocker Kevin Le Roux, who is rehabbing a thigh injury.

Maurice Torres put up an impressive 37 points in Puerto Rico’s loss to Finland. While he had more points, this honor goes to Abdel-Aziz due to the fact that they pulled out the win against one of the best teams in the world. Similar to Torres, the Netherlands tried to ride Abdel-Aziz’s shoulder to the win, and it worked. The opposite who plays for Andrea Giani at Revivre Milan took the Italian SuperLega by storm last year. He was the top-scoring player before succumbing to injury. He is now the second-leading scorer in the tournament, and much of that came on the back of this performance. Abdel-Aziz hit 56.5% on his way to 26 kills. He also led the match with 4 service aces. When he wasn’t getting an ace, he applied plenty of pressure from the service line. The Netherlands scored more from his service rotation than anyone else. His team sits in 2nd place in Pool B and has qualified for the next round.