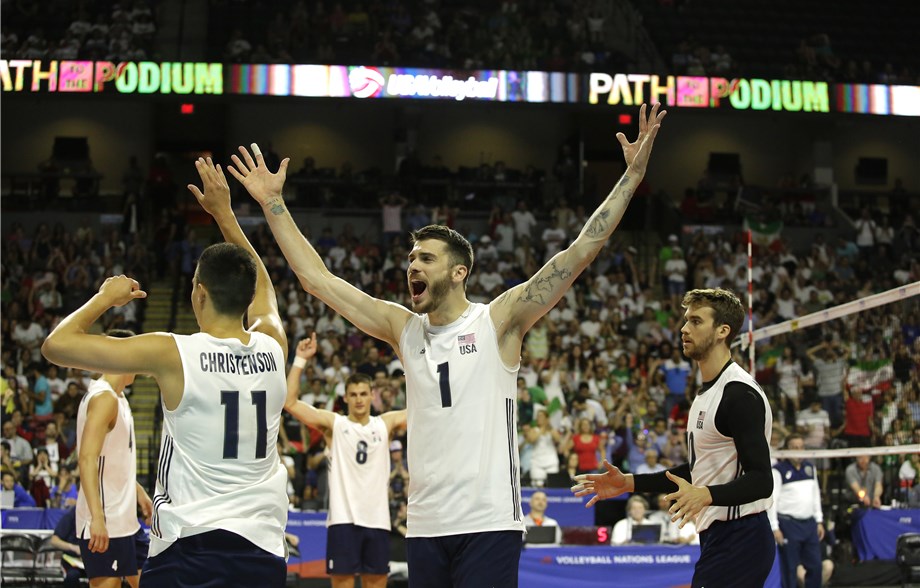 All six starters scored, led by Matt Anderson‘s 18 points, as the United States finished off a perfect 3-0 week at home in Hoffman Estates, Illinois.

Daniel McDonnell (12), Aaron Russell (11), TJ DeFalco (10) and Jeff Jendryk (6) followed, while Micah Christenson rounded out the scorers with one point from a block.  Anderson downed a match-high 13 kills and added team bests of three aces and two blocks. McDonnell chipped in nine kills, two aces and a block, while Russell also tacked on nine putaways to go with a block and an ace. DeFalco chimed in with eight kills and two aces. Jendryk put up a team-leading two blocks to go with four putaways. The Americans did not use any substitutes in the match. McDonnell and Jendryk started in place of Max Holt and David Smith.

“ We passed really well and made us very difficult to stop,” Jendryk said. “We will carry on fighting in every game.”

Iran led 15-13 midway through Set 1. Ties at 15 and 21 were signs of things to come as the stanza would go deep into extra points. But first, two Russell aces gave the Americans a 23-21 edge. Team USA had the first set-point try at 24-23, but missed on a service error. The Iranians battled back and had a chance at the set. Eventually, McDonnell ended the stanza at 29-27 with an ace, the sixth of the match for Team USA.

Anderson’s offense and Jendryk’s blocking lifted the United States to a 25-20 Set 2 win. Iran led 11-9 but a four-point serving run on the hand of DeFalco put the Americans on top, giving them a lead which they would not relinquish.

Set 3 was another close one, with the teams drawing level at 16 and again at 23. The Americans earned the first match point try, but Iran thwarted it with a kill to tie it up again at 24. Two points later, Anderson fittingly closed out the team’s stay in Chicago with a kill to seal the sweep.

USA coach John Speraw: “We didn’t know much about their setter, but I thought he did a great job. They did use some new players. Obviously the depth of Iran is very good and they played a very good volleyball match. We didn’t know as much as we do about some of their other players, but I thought they were very skilled and it was a tough match.”

Iran coach Igor Kolakovic: “It was a tough game in all senses, but USA were better than us and I congratulate them for the victory. We did a lot of changes in the team because we have some players with injuries and we have some young players who we’d like to give an opportunity to show their quality. I think we were so close to taking one set, but we need experience to win one set against the USA. For that reason I am so unhappy, but thanks to the spectators here because they made a perfect atmosphere to play volleyball tonight.”

Great Game! We need more USA fans to show up though – both home games in Chicago for USA had tonnnnns of opposing fans. (Poland obviously, but Iran too!) It was a great atmosphere but we gotta get out and support our guys – c’mon USA!!!

Even though we (Iran) were defeated but the game was great. It looked the game was in Tehran. Yaeah, you should gotta get out and cheer your boys!!

Please, you really need a complete recording, or a recording of the second set of the US-Iran match. If anyone has something, please send me a link