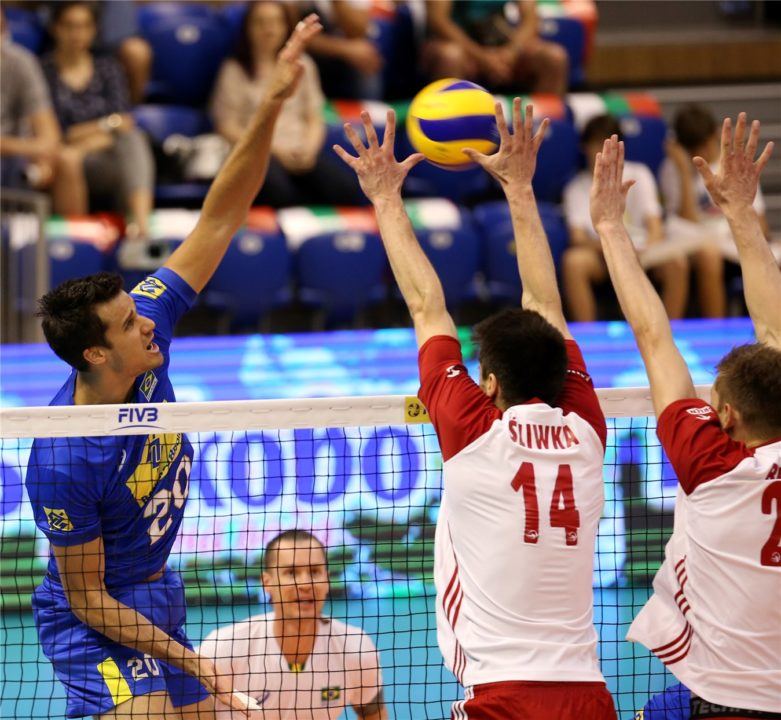 Brazil kept things rolling with a win over Poland while Canada took down Bulgaria in Pool E1. Current Photo via FIVB

In a match featuring the reigning Gold-medal winner (Brazil) and the previous World Champions (Poland), it was Brazil coming out on top. Brazil collected the maximum of three points to add to their Pool E1 lead after a four-set victory over Poland. With the loss, Poland sits at seventh and will need to move up in the standings to find a place in The Final Six.

Canada got their first points of Pool E1 as they won a four-set battle with Bulgaria. The first two sets both went to extra points, but Canada came out on top in both as they gathered a full three points to move into the top five of the Group 1 table.

Poland couldn’t add a second tick to Brazil’s loss column as the Brazilian’s avenged their lone loss in four sets.

The Brazilians jumped out early with a 2-0 set lead after taking the first 25-21 and the second 25-20. Although Poland was the better blocking team, winning the margin at 12-6, Brazil used an efficient attack to overcome Poland.

Led by Bartlomiej Lemanski‘s 12 points, Poland fought back in the third to win by the biggest margin of any of the sets at 25-17. Brazil had four players with double-figure points, as Renan Buiatti had the most at 18. Buiatti, along with his teammates helped Brazil enjoy a 25-19 fourth set victory, giving them a 3-1 match win.

“We didn’t play well in our first match against Poland in Italy,” Ricardo Lucarelli Souza, who had 14 points, said. “Today we did less mistakes and it was the key to our victory. We will face Bulgaria tomorrow and it will be definitely a tough match. Now we have to rest and I hope we will win again despite the fact that the arena will be full and all spectators will scream for the hosts. We, the players love these atmospheres and I’m excited for our next challenge.”

The loss doesn’t completely dampen Poland’s chance at The Final Six, but it does have them on the outside looking in at the moment. They currently reside in the seventh spot of the Group 1 standings, just a single point behind the U.S. and Canada for fifth/sixth. They’re also 0-2 now in Pool E1, putting them in fourth of four teams. They can amend that tomorrow vs. Canada.

Brazil, on the other hand, sits in second of the overall Group 1 standings with a 4-1 record and 13 points. They’re also leading Pool E1 with six points. They’ll finish off Pool E1 play taking on Bulgaria tomorrow.

Host Bulgaria was sitting a point ahead of Canada as the day began, but the Canadians emerged victorious and ahead in the standings after a four-set victory.

Late in the first set, Canada led 23-20, but four unanswered by Bulgaria gave them the lead and a set point opportunity early. Canada didn’t waver though, and would win four of the next five. The set was capped off with Graham Vigrass logging a block and one of his 17 points for Canada.

The second set was just as tight as the first. Again Bulgaria took a late lead after Nikolay Penchev spiked one of his 15 points for a 21-20 edge. Canadian captain John Gordon Perrin flipped the switch for Canada as he assisted in Canada going tit for tat into extra points. In crunch time of the set, Perrin had a couple spikes in a row including an ace as Canada won the long set 30-28. In total, Perrin finished with 24 points.

Set three showed an early advantage to Canada, but Bulgaria went on a run in the middle of the set to lead 20-15 and eventually win the set 25-21.

After taking the fourth to lessen Canada’s set lead at 2-1, Bulgaria used the momentum won in the third to build a 10-4 lead in the fourth. Canada slowly crawled back and eventually took the lead late, winning the final set 25-23. Bulgaria finished with more spikes (56-50) and blocks (15-13) led by Nikolay Nikolov‘s seven (among 17 points). Bulgaria’s Achilles heel ended up being attack errors – in which they had nine more – and losing the serving ace column.

“I am pleased not only with the result but I am also happy because we are growing as a team and we start playing high-level volleyball,” Canadian head coach Stephane Antiga told FIVB. “Tomorrow’s game will be special for me. It’s motivating to play against my ex-team. I hope that tomorrow will play on the same level and hope to make another great result.

That match tomorrow that Antiga alluded to will be against Poland in an opportunity for Poland to jump Canada or for Canada to gain distance. Both Bulgaria and Canada are now 1-1 in Pool E1. However, Canada’s win in four vs. Bulgaria’s win in five over Poland on Friday gives Canada three points to Bulgaria’s two in the battle for second in the pool. Canada is in good shape at fifth in Group 1, but doesn’t have much room to spare behind it to stay in The Final Six. Bulgaria, at five total points (two behind Canada), missed out an opportunity to jump up in the standings. They’re currently at eighth, but not too far out away from the top six.