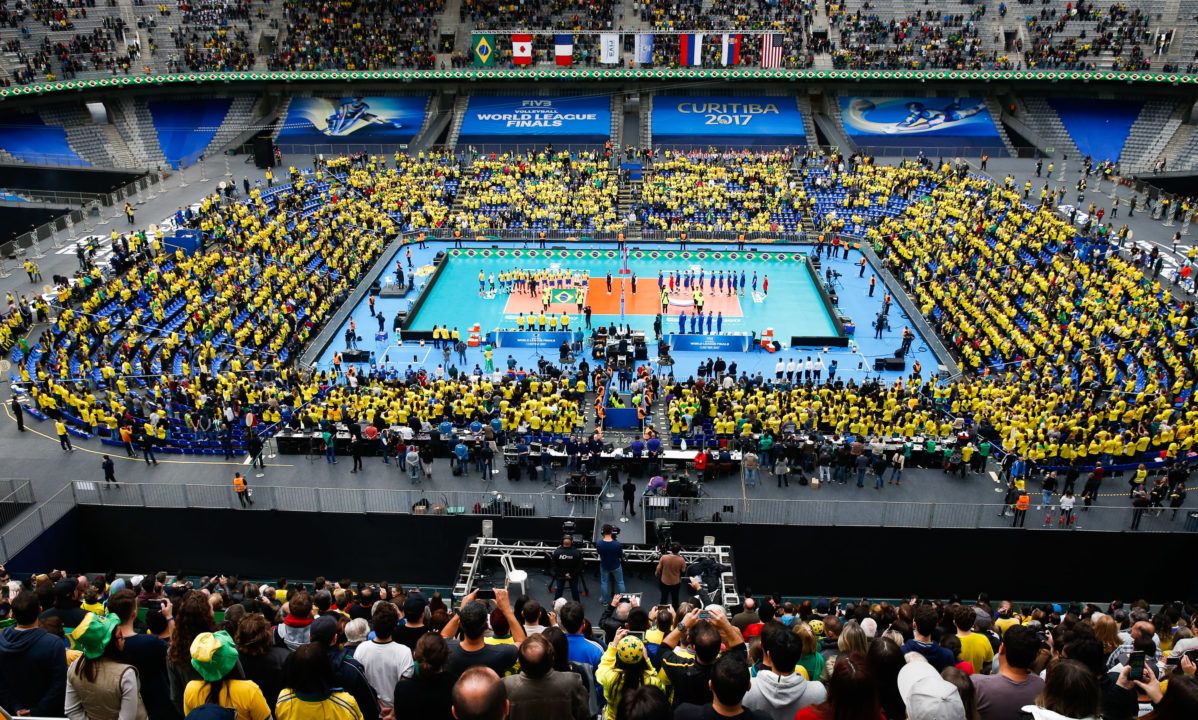 Brazil and France walked away with five-set wins on the day as both teams joined Canada and the U.S. to finalize the teams in the semifinals. Archive Photo via FIVB

In the final day of pool play for the Final Six, both matches had repercussions on the semifinals. With Canada and the United States secured in the final fours, they were awaiting the results to see who they will play tomorrow. After five-set victories for both Brazil and France, they earned the top spot in their pools. That means Brazil will face the U.S. tomorrow with France taking on Canada.

Brazil came into the day needing to win just one set to clinch a spot in the semifinal round. Two sets was good enough to win the pool so that they could face the second place team in Pool K1. Russia’s only hope was to sweep Brazil.

Any Russian hopes ended early, as Brazil controlled the first set for a 25-18 win behind Ricardo Lucarelli Souza‘s match-high 25 points. At that point, Russia was eliminated but it didn’t stop them from competing.

Dmitry Volkov and Maxim Zhigalov each netted 17 points for the Russians, and helped Russia to win the second 25-18. After Brazil won the third set to clinch the Pool J1 victory, Russia again responded by winning the fourth 25-22. Still knowing their effort in the fifth would be futile to the final four result, Russia battled back-and-forth with host-Brazil. Eventually though, Brazil came out on top behind Souza, Mauriciio Borges Almeida Silva (14 points) and Wallace De Souza (13 points).

Brazil out-spiked Russia in the match 67-45, which was the biggest discrepancy even though Russia had more blocks (17-9) and 13 less attack errors.

“We knew in advance we needed one set to reach the semifinals, but we always meant to win anyway,” Brazilian head coach Renan Dal Zotto told FIVB post-match. “Brazil always played like that and we had no reason for that to be different. We had a great start, knowing that Russia is not the team of yesterday against Canada – Their level is the one of today. We had our ups and downs, lost our focus and the game got complicated, but it was important the help of our reserve players as that helps the growth of the entire team.”

While Russia is eliminated, Brazil finishes their Final Six pool (J1) at 2-0 (five points) after a four-set-win over Canada and the five-setter today. They’ll host the United States tomorrow with a spot in the finals on the line.

Both sides came into the day with aspirations of advancing to the semifinal round tomorrow, but only France came out as Serbia was eliminated. Serbia had an up hill battle after they knew they had to win 3-0 or 3-1. France just had to come out with two sets, as a victory would win them the pool, which is what happened in the fifth and final set.

France came out with a hot-start. Behind Stephen Boyer‘s lethal attack (21 points, 18 on spikes), France built a 1-0 set lead with a 25-21 first. Earvin Ngapeth (14 points) and Kevin Le Roux (11 points, three on blocks) contributed big-time as well, as France was one set away from clinching a spot to the semifinal round. Although Serbia fought hard, knowing that a second French set-victory would do them in, France came out on top 25-20 in the second for a 2-0 lead.

Just like Russia, Serbia played with pride in the action to come. Even knowing that their World League championship chase was over, Serbia exploded for a 25-17 third set victory. Nemanja Petric and Aleksander Atanasijevic, who each totaled 18 points, led the resurgence. Both came on as subs in the first and Petric failed to see the court in the second. The pair started sets three and four though, as the Serbians also won the fourth, 25-18.

Although the fifth had no bearings for Serbia, France needed to win to avoid playing host-Brazil in the semifinal round tomorrow. Things were locked up at five, but a 3-0 flurry by France pushed them ahead. They’d keep a solid separation from there, and eventually win the set 15-11.

France out-spiked Serbia 57-53, but had eight more attack errors. The Serbians also dominated the block (16-10), which has become accustom for France of late. The biggest difference that the French held was in the service area, where they tossed nine aces to Serbia’s one.

For Serbia, it’s a bitter end as they are unable to defend their 2016 FIVB World League Championship. France, on the other hand, has the best record overall at the World League. They not only finished atop the Group 1 table in the first three weeks, but extended their mark to 10-1 including the Final Six action. They’ll now get ready for Canada tomorrow, who finished as the five seed after the first three weeks and advanced after beating Russia yesterday.