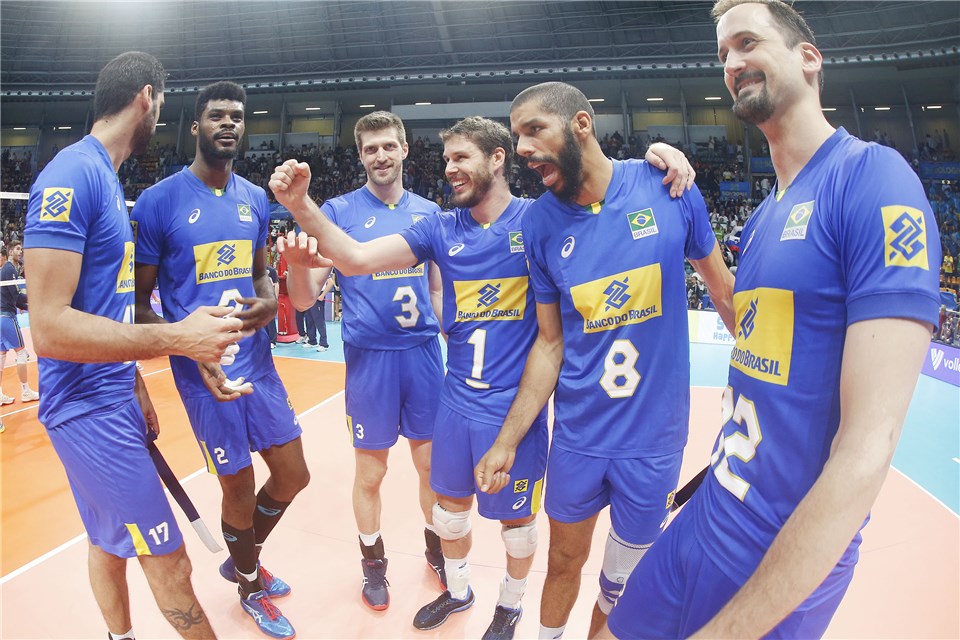 Brazil is gritting and grinding its way through the WCH. Today it was able to book a ticket to the competition’s Final 6. Meanwhile, Belgium was able to keep its Round 3 hopes alive by defeating Australia. Here is the day’s recap:

In the most awaited match of the Pool, Brazil had a breeze of a match against Slovenia to secure its Final 6 spot. Slovenia simply didn’t have the firepower to contend against the current Olympic champions, as it left the game with no players scoring in double figures, while Douglas Souza (15) led the way for Brazil. The Brazilian team was also gifted 25 points from errors by its opponent.

Isac Santos, who lost his starting job midway through the tournament to Mauricio Souza, was in the starting line-up again after the latter is day-to-day with a sore hamstring. Santos was instrumental in the game, with 11 points, strong service and blocking:

“We knew from the start that this would be a very important game. The whole team is leaving the match very happy and satisfied, but we still have a long way to go in front of us. In a tournament like this, with so many quality players, you have to enter the game ready to change it. Today I’ll go home happy because I was able to help my team.”

Although the 3-0 score many not say it, the Belgian team had a very tough time bringing home the win against Australia, as it played behind the score for much of the game. On the Australian side, the team, although defeated, will take solace in the fact that its inching closer and closer to the world’s elite competition. Sam Deroo led the way for the Belgian squad with 23 points, while returning to play Australian captain Pete Carroll had 16 points in the losing effort.

Andrea Anastasi, Belgium’s head coach: “I am happy because my players showed fighting spirit. This is what we were lacking in the previous matches, but we are not so experienced yet. Coming back in the first two sets and winning means that my players can cope with the pressure. We had a good tournament. It will be a big honour for us playing tomorrow against Brazil – I do not know how many medals they have, 100, maybe? They are better than us, for sure, but we will try to give our best. The atmosphere in PalaDozza is just amazing and I am enjoying every single moment of this tournament. Big thanks to all the fans.”

Sam Deroo, Begium’s captain: “It actually had a good effect on us winning the first and second sets after a point-for-point game, because yesterday we couldn’t do so. We played good volleyball, but it was not enough and on the contrary, today we were lucky to win. We fought back and I am happy for showing this spirit. Australia played good in the first two sets, but we turned things in our favour. Tomorrow’s match vs. Brazil will be a very important one. We need to win in order to have a better ranking for the Olympics.”

Belgium’s Igor Grobelny: “Our goal today was to not make any stupid mistakes as the ones that we made yesterday. We wanted to keep alive the good vibes and good energy in our team, to push it a little bit more. This is what we needed after yesterday’s loss to Slovenia. The match vs. Brazil will not be an easy one, but for us this match will be our big final. I played for a few years in Poland and the fans are a little bit similar to the ones in Bologna. It is amazing receiving this support and it motivates us to better ourselves.”

Mark Lebedew, Australia’s head coach: “Yesterday’s game vs. Brazil was really disappointing for us, because we had our chances. We were very close to taking two sets, but we missed something in the end. Today we played better, mentally stronger as well. We had two set points, but Belgium are better than us – they have a couple of really good players. We will keep on working on the small details. I want to thank to everybody in the sports hall – I feel amazing seeing all the people, even cheering for us, it is great.”

Paul Carroll, Australia’s captain: “It is disappointing losing. We should have won the first two sets, but they made some great defence plays. We have to pick ourselves up and play good against Slovenia tomorrow. Bologna is being just incredible – Italy is not playing here, but the Italians are here to watch volleyball. Our players on the bench cheered the fans and we felt their support too. Because of that we want to win tomorrow – we want to say goodbye to the Italian fans with a victory for them.”

The Belgians are 2nd in the standings after this huge match that you can enjoy here 👇#FIVBMensWCH #volleyball #volleyballWCHs pic.twitter.com/MypKyvKMOn