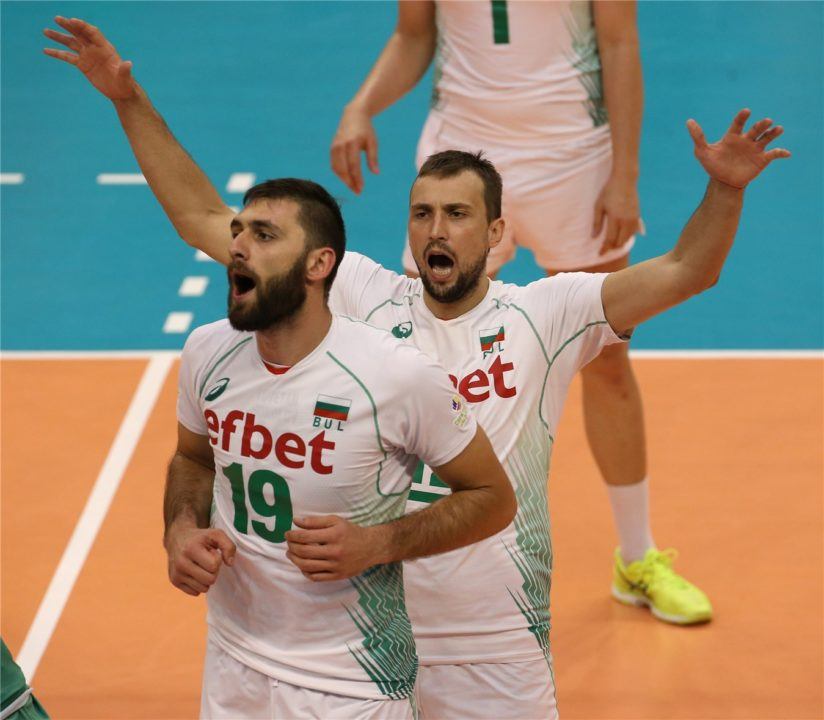 Bulgaria scored the upset over Brazil while Poland won a big match against Canada to close out Pool E1. Current Photo via FIVB

Although Brazil still finished on top in Pool E1, Bulgaria’s upset of the defending Olympic champs had a big impact on the overall Group 1 standings. Not only did it drop Brazil a spot, but it vaulted Bulgaria ahead of other contenders for The Final Six while seriously throwing their name in the ring.

Meanwhile, Poland and Canada started the day in the top seven of the Group 1 standings as Canada sat at fifth with Poland in seventh. Amazingly, with the win Poland flip-flopped spots with the Canadians.

For Bulgaria, Brazil has become the hurdle that they are constantly looking to clear. They’ve played the Brazilians 23 times at World League, more than anyone besides Cuba. They’ve also lost 19 of those, more than they have against any other country. They were able to defeat their nemesis and clear that hurdle today though.

Brazil started with the lead at 9-6, but Bulgaria would collect nine of the next 12 to take a 15-12 advantage. From there, it was even play but that was enough for Bulgaria to take the set 25-22.

Set three was the tightest of them all as it was tied at 17 near the end. Renan Buiatti (13 points) and Mauricio Borges Almeida Silva (12 points) helped carry Brazil, along with Ricardo Lucarelli Souza (10 points) to the finish line and escape with a 25-23 set win.

Four unanswered early in the fourth set helped Bulgaria qwell Brazil’s momentum and limit any thoughts of a comeback. Eventually they pulled ahead by six late in the set, which would stand all the way to the end of the set when Tsvetan Sokolov finished off his 19th and final point of the match. Sokolov was the match-leader in points, and was heavily assisted by Nikolay Nikolov, who had five blocks and 12 points in the match for Bulgaria. Brazil had the slight edge in spikes (42-41), but Bulgaria led in aces (7-4), blocks (11-6) and had six less attack errors.

Brazil wasn’t overly affected by the loss as they still won the pool with six points. They did slip one spot in the overall Group 1 standings though from second to third, as now they trail Serbia and France. Brazil will close out pool play next week in Pool G1 where they’ll rematch Bulgaria, face Argentina and then have a chance to catch a country ahead of them in Serbia.

The win is bigger for Bulgaria than the loss is for Brazil. Not only did Bulgaria pull the upset, but it did so in four sets, pulling out the maximum three points. Had Bulgaria lost the match they’d be in 10th. Had they only won in five, they’d be in eighth. But after winning in four they now sit in sixth, just good enough to make The Final Six if it started today. They’ll have a difficult schedule to close, as Brazil will be awaiting the rematch. Then they’ll take on Serbia, who’s currently in second. The good news for Bulgaria is they close out with Argentina, who’s currently in last in Group 1.

In a match that featured two of the top seven teams in Group 1, it was Poland who came out on top.

Things started in Poland’s favor just as they ended, as they jumped ahead 17-9. However, Canada would win 11 of the next 16 to pull within two. A Poland timeout helped clear their head and possibly iced Canada’s hot streak, as the Canadians’ next serve went long. Dawid Konarski, who ended tied for the match lead with 15 points, eventually put down set point at 25-21. It was just the fifth time in Poland’s last 19 World League matches that they won the opening set.

Although Canada lost the set, the momentum they had from playing better toward set one’s conclusion gave them a 9-5 jolt to begin the second. It wouldn’t last though as Poland would even the game at 11 and take the next point for the lead. Canada reacted well, winning eight of the next 11 for a 19-15 advantage. Then, Poland made a stand when they trailed 22-18, tallying the next three points and four of five. One of five Bartlomiej Lemanski blocks (12 points) came with help from Michael Kubiak (10 points) to tie it at 23. After things stayed even at 25, Poland would win the next point for a set point opportunity at 26-25. Konarski’s wicked serve forced Canada out of system, making a tough angle for Sharone Vernon-Evans (10 points) on a back row attack as he went long.

Set three was close throughout, but late in the set Canada was able to gain a small cushion and win the 25-20 as they were backed by Ryley Brendan Barnes and Jason Derocco’s combined 28 points.

Set four was deadlocked through 20 total points at 10-10 until Poland would claim eight of the next 11. That lead would hold as Poland won the final set 25-19.

“It could be better for sure, but we wanted to finish this tournament with positive vibes and this win is the best way,” Lemanski told FIVB. “Every match is important for us and this is also an important victory.”

Canada earned 85 of its 90 from attacks, opponent errors and aces, whereas Poland achieved just 83 from those categories. The biggest difference was the Polish block, which dominated Canada 14-5.

“Tonight they played better than us. We made a few mistakes, but we are a really young team and we should use these matches to develop,” Canada’s Nicholas Hoag told the FIVB. “Despite the fact we lost we took a great experience for the future. We took some points and we want to qualify for the Final Six in the World League. It will be tough. I expect a tough tournament next week, but we have some time to rest and to prepare for the next challenges.”

And indeed that is what next week will bring for Canada, as they prepare to face Belgium, France and Italy. That gives them two opportunities against top four teams while they sit in seventh. Canada is only a point back of Bulgaria for sixth, so there’s plenty of reason to think Canada can make The Final Six, but should they miss the cut it’s important to remember Canada is playing in Group 1 for the first time this year after winning Group 2. No matter what it’s been an experience that Canada can build off of with many positive takeaways.

Poland on the other hand now sits in playoff positioning at number five in the Group 1 table. At 3-3 overall with nine points, they’re only a point back of fourth but also only two points ahead of ninth. Their crucial week comes against Russia, Iran and USA. Those are all teams within three points and behind Poland in the standings. That means Poland can lock up their spot but it also means they’ll have a target on their back.