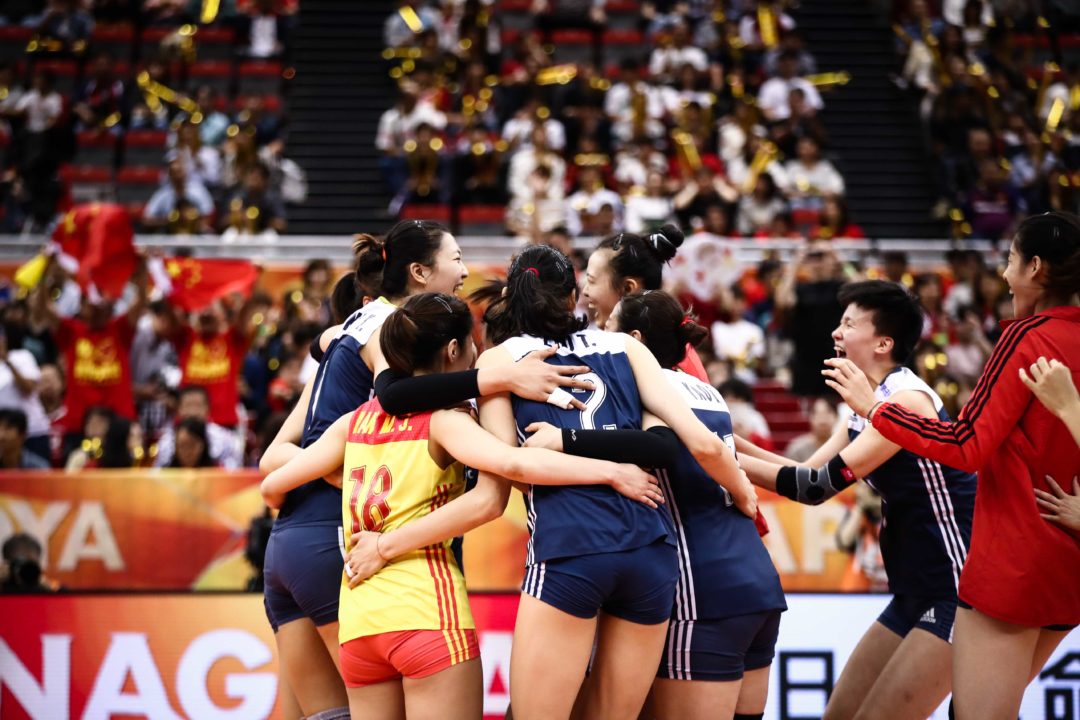 China coach Lang Ping has been waiting until crunch time to put her young dynamic hitter Li Yingying into matches, even though it's clear their outcomes improve with her on the court. Current Photo via FIVB

In spite of an apparent reluctance by Chinese coach Lang Ping to take the training-wheels off her offensive dynamo Li Yingying, the 18-year old combo opposite/outside hitter continues to prove that China’s best team is a team with her on the court.

In Sunday’s opening match of the Final 6 round, China fought back from a 2-1 deficit to beat the USA 3-2 and earn a crucial foothold at the top of the standings.

The difference in the Chinese rally can be pointed to Li’s presence in the starting rotation for each of those last two sets, which China won 25-23 and 15-9, respectively.

In just 2+ sets of play, Li had 9 kills, 2 aces, and 1 block, while hitting 45% (better than China’s 40% hitting as steam, and far better than the 35% hitting from Zhang Changning, who left the match when Zhu entered).

Li is a lefty, and lefties have given Americans fits all summer. She made a splashy debut this summer to open the Nations League when China was without Olympic MVP Zhu Ting, but then was relegated to only sporadic starts as Lang wanted her to continue working on her defense and all-around game.

That defense is still coming along, but China has enough help to cover her, as they did on Sunday, where she was only forced to receive 1 serve, while her superstar teammate Zhu and libero Wang Mengjie covered for her.

Li also started on the bench when China and the US played in the Nations League semi-final, before entering midway through the 3rd set. She had 14 points in just a set-and-a-half of play, but with Michelle Bartsch-Hackley at the peak of her game there (25 points), the US had enough to overcome for a 3-1 win.

On Sunday, Lang’s substitution was more effective, and it spurred China to 2 straight set wins, and the match, and left the Americans with a 3-game losing streak heading into a must-win over the Netherlands.

In the Nations League bronze medal match, after losing to the U.S., Lang started Li against Brazil. In that showing, China dominated in a 3-0 sweep, and Li had the team’s 2nd-most kills (14).

China’s pattern has become waiting until they get in trouble, and only then putting Li on the court. They did the same in their 2nd round closing match to Russia – bringing Li on in the 2nd set when they were losing and leaving her on for the rest of the match.

All of that is countered of course by the fact that she didn’t see the court when China swept the US 3-0 earlier in the tournament, but that match was more about the American offensive struggle than China’s.

A lot of pressure is now off thanks to that win over the Americans, but if China wants to continue marching on toward the championship, especially if-or-when they face Italy and Serbia (which wouldn’t happen until the semi-finals or finals), Li has shown that she needs to be on the court.

I would not start her and put all that pressure on her but I would bring her in quickly – after the first 10 points and in the first set.

Zhang Changning does not look 100% healthy but I would still start her.