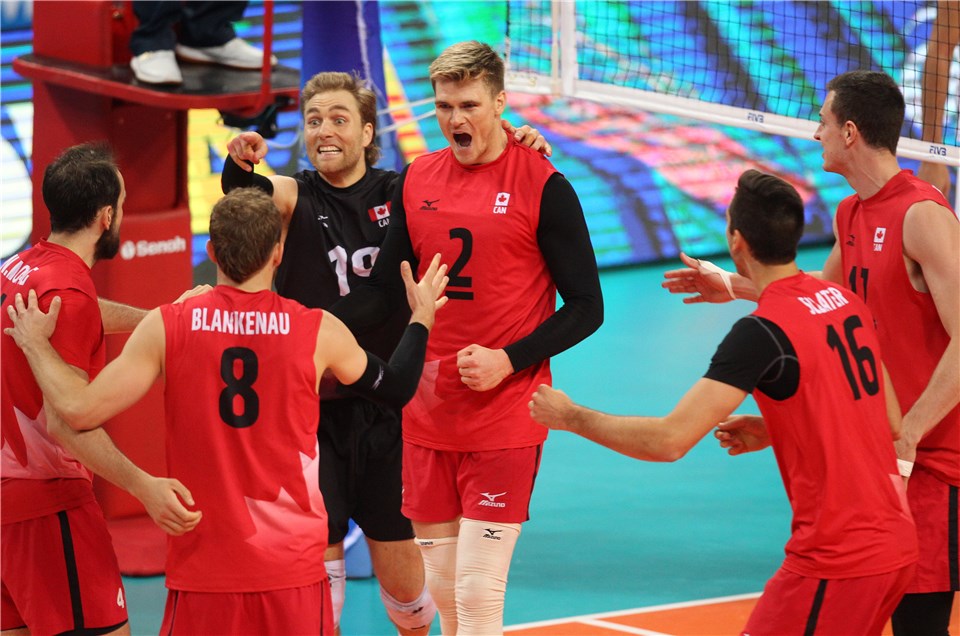 John Gordon Perrin is now the top-scorer of the World Championships. He led all players with 31 points against Iran on Saturday.  Current Photo via FIVB

After Saturday, 4 teams have qualified for the Third Round of the FIVB World Championships. The United States clinched 1st place in Pool G with a 3-0 dismantling of Bulgaria. Italy qualified after a 3-2 defeat to Russia. Even if they lose against the Netherlands on Saturday, they are 4 points clear of Russia and the Netherlands, and they are guaranteed 1st place in Pool E. Russia is in great place to qualify as one of the top 2 runners-up as they face Finland on Sunday.

Brazil has clinched 1st place in Pool F with a 3-0 sweep over Slovenia. They are 2 matches ahead of Belgium and Slovenia with just 1 match remaining. Serbia is in 1st place of Pool H. Their 3-0 win against Argentina has set up a showdown with Poland determine the winner of Pool H. Poland’s loss to France puts them at 5-2. Serbia may not win the pool, but with 17 points, they are guaranteed 1 of the 2 spaces reserved for the top runners-up.

MATCH OF THE DAY: RUSSIA VS. ITALY, POOL E

In a continuing trend on Saturday, it was not a day for the host teams. First the United States downed Bulgaria, then Russia issued Italy its first loss.

The Russians used an 11-2 advantage in blocks to overcome a 55-49 deficit in kills in the close victory. Both teams managed nine aces and committed 34 errors.

Ivan Zaytsev recorded a match-high 21 points (20 kills, 1 block) and Osmany Juantorena added 16 points with 14 kills and two aces. Next on the team were a trio of players with seven points. Filippo Lanza notched his seven kills in just the first three sets before exiting the game.

While his team was eliminated today, Perrin did his all to earn a victory for Canada against Iran in Pool G. The outside hitter joined the 30-point club with 31 points on 27 kills, 1 ace, and a match-high 3 blocks in the tie-break win. Perrin also hit 61.4% in the victory. What was possibly the most impressive was the fact he scored 7 points in the 5th set. With 3 of his team’s 15 points coming from Iran errors, Perrin scored 58% of Canada’s earned points in that final set. He has now become the leading scorer at the World Championships up to this point.