NCAA Regional Recap: How Did We Get to the Final Four? 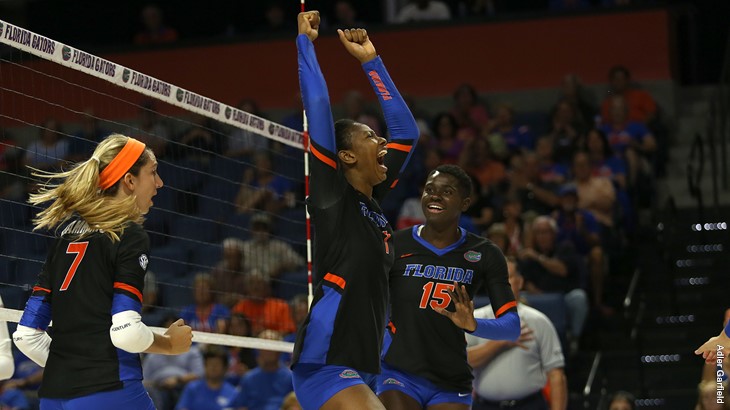 Florida had a remarkable comeback vs. USC to headline the two day's worth of phenomenal volleyball action in the Regionals. Archive Photo via Florida Athletics

If you missed this weekend’s regional action featuring eight Sweet 16 and four Elite Eight matches, we feel bad for you here at VolleyMob. It was a phenomenal two days of matches as now four teams have carved their way into the National Semifinals in Kansas City. Don’t worry though, because if you missed any of it, you can catch up to what happened in each of the regional matches below with links to recaps:

The Cornhuskers may have been the lower seed and the road team, but they showed why many thought they were the favorite in the region. For a moment, it looked like Kentucky was about to force yet another comeback, but Nebraska cut things off in the fourth to punch their ticket to nearby Kansas City where a sea of red awaits.

Kentucky continued its trend as the Cardiac Cats with a win over BYU after they fell behind 2-1 in sets. It marked the second straight comeback after falling behind 2-0 in sets to Western Kentucky the round before. It was also the second straight year BYU fell in five in the Sweet 16.

Ex-Big 12 opponents Nebraska and Colorado met in Lexington, but it was all Cornhuskers as it has been in now 50 of the 57 meetings between the schools. That gave Nebraska their sixth straight regional final, while Colorado’s underdog story came to a close.

The Nittany Lions made it a perfect 6-0 in sets for the week as they did what they couldn’t do twice in the regular season – sweep Michigan State. They are the only team in the Final Four who hasn’t defeated a seeded team, but Michigan State was ranked 11th in this week’s VolleyMob Top 25 Power Rankings.

The Nittany Lions offense was dominant against Missouri as the Tigers could not slow down Simone Lee and company. After losing a set in each of their first two rounds, it was Penn State’s most impressive tournament performance coming against their most stern competition.

In an all-Big Ten Sweet 16 match, Michigan State came back in the fourth to earn a 3-1 victory over Illinois. The win pushed Michigan State to its first Regional Final in over 20 years as they became the only unseeded team to make it to the NCAA Quarterfinals.

The Gators were in serious trouble as USC continued its strong play by taking a 2-1 set lead. The Trojans even held match point in the fouth, but three straight Gators points forced a fifth. They continued their resolve in the fifth and went from down 9-5 to winning 15-11 as the Gators reach their first Final Four in 14 years.

The Gators were tested early and dropped a set to UCLA, but they rebounded more than nicely with three consecutive 25-17 set victories. They haven’t been able to crack the Final Four in 14 years though, which they now get the chance to accomplish.

The biggest upset of the Sweet 16 came right here as USC not only defeated Minnesota, but handled them in a three-set sweep. For the Trojans, it gives them their second Regional Final in three seasons as they last made it in 2015 as the top seed.

Recap: Stanford Heads Back to the Final Four With an Assertive Sweep of Texas

The Cardinal proved that last year was no fluke as Texas could not achieve revenge from last year’s National Championship match. Not only did Stanford earn the victory, but they did so in sweep fashion in earning their second consecutive Final Four appearance.

The Longhorns were tested to the fullest by Utah and were almost upended, but for the second straight season survived in five sets in the Sweet 16. It still may have been the best season in Utes volleyball history, while Texas continued their tradition of making the Regional Final.

Stanford found out they’d need to play well as the Wisconsin offense bruised Stanford’s defense for a first set win. The Cardinal had their offense clicking throughout too though, and when the defense picked things up Stanford took the final three sets to set up a National Championship rematch with Texas.