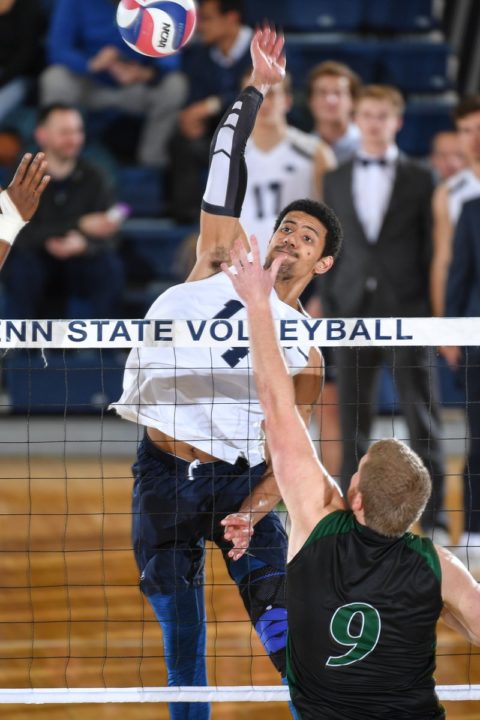 No. 15 Fort Wayne continued to gain respect in the national spotlight as the newly ranked squad posted a four-set road win over No. 12 Saint Francis on Friday. Also coming out with wins were No. 7 Ohio State, No. 8 Lewis, No. 9 Grand Canyon and No. 10 Penn State.  Current Photo via Penn State Athletics

No. 15 Fort Wayne continued to gain respect in the national spotlight as the newly ranked squad posted a four-set road win over No. 12 Saint Francis on Friday. Also coming out with wins were No. 7 Ohio State, No. 8 Lewis, No. 9 Grand Canyon and No. 10 Penn State. King came up victorious in a Conference Carolinas road match.

Key Stats: Eleven blocks helped King hold Erskine to a .000 hitting effort on the night en route to the sweep. Meanwhile, the Tornado hit .288 and outdid the Flying Fleet in kills (32-25) and digs (35-27). Erskine outserved King 5-2, but that was not enough to overcome 25 miscues.

It Was Over When: King turned a 2-0 deficit into a 7-3 advantage in Set 3 and held the upper hand the rest of the way. Four Erskine miscues and back-to-back blocks by Dalton Johnson gave the Tornado the edge. The Flying Fleet narrowed the gap to two at 14-12 on an ace by Matt Friddle. King scored nine of the next 13 with two Dalton blocks and kills by three different players, to go up 23-16 and put the match away. A service error and a Bell putaway capped the 25-19 victory.

Key Stats: Twenty two more kills and three more blocks were the difference for the Mastodons in a four-set road win over Saint Francis, which pushed the team to its best ever start at 8-0. Fort Wayne bested the Red Flash in kills (58-36), hitting percentage (.292 to .112) and blocks (9-6). SFU outserved the victors 6-4 in aces.

Senior outside Brandon Buck and redshirt senior outside Stephen Braswell paced SFU with 11 and 10 kills respectively. Braswell also served up two aces alongside junior outside Cole Thompson, who was one of four players with two blocks apiece.

It Was Over When: The Mastodons led by six early in Set 4 at 10-4 behind four Diedrich blocks. Three SFU miscues and a pair of Price putaways made it 15-8 Fort Wayne. The set was far from over however as the Red Flash rallied from down eight at 19-11 to within two at 23-21. Seven of SFU’s 10 points came on Mastodon miscues. A Stone kill made it 24-21 Fort Wayne and a Price putdown sealed the 25-22 win two plays later.

It Was Over When: Lindenwood lost the decisive fifth set despite outhitting GCU .571 to .294 in the stanza, which featured 12 ties. After a knot-up at nine, a service error and Johnny Winkler putaway gave the Lions the 11-9 edge. The Lopes called timeout and scored four of the next five, including a Schwob ace and two Lindenwood service errors. A service error put GCU up 14-13, but a Schindler kill leveled the score. Putdowns by Saada and Schwob wrapped up the win at 16-14.

The 42-40 opening stanza score tied USC records for most points scored and allowed in a set, matching a 2017 second set loss to UC Irvine.

Stat Leaders: Redshirt sophomore outside Ryan Coenen and redshirt junior opposite Mitch Perinar did the bulk of the damage for Lewis, combining for 30 of the team’s 45 kills. Coenen had a standout effort with 20 kills, while hitting .621 (20-2-29), serving up three aces and adding six digs and three blocks. Perinar hit .556 with 10 kills in 18 errorless swings. Redshirt freshman middle Tyler Mitchem followed with nine kills, while hitting .727 (9-1-11). Redshirt freshman middle TJ Murray notched four kills and a team-leading five stuffs.

It Was Over When: After a tie at 5-all, the Flyers ran away with the set, scoring nine of the next 14 points. Five USC errors and two blocks and a kill by Coenen guided the Lewis run. The Trojans were within three at 14-11 after a Grasso ace, but would get no closer. The Flyers outscored USC 11-5 down the stretch. Three Coenen kills and two kills and a block by Mitchem put Lewis up 24-15. A service error gave the Flyers the 25-16 and the match.

Key Stats: The Buckeyes outhit Charleston .372 to .038 and nearly doubled the Golden Eagles’ kill tally (40-21) in a sweep. Ohio State also served up six aces, while allowing just one, and outblocked UC 10-7.

It Was Over When: After winning Set 2 25-9, the Buckeyes built an 11-5 lead in Set 3 as Charleston committed five miscues and Hanes tallied a kill, two blocks and an ace. Hervoir downed two kills and Laffin, Leeson and Reese Devilbiss added one apiece as OSU jumped ahead seven at 16-9. The Eagles were within three at 19-16  as three players turned in kills. A Hervoir putaway made it 23-19 Ohio State, but Charleston was within one at 23-22 after a kill and an ace by Rajahl Moxey. A hitting error and a Devilbiss kill finally ended the match at 25-23.

A trio of BSU players managed double-digit efforts, led by sophomore outside Matt Szews‘ 11. Sophomore middle Blake Reardon and senior outside Mitch Weiler added 10 kills apiece, each hitting .250 or better. Szews also served up three of the team’s nine aces, while Weiler finished off a double-double with a team-high 10 digs. Senior middle Anthony Lebryk put up a match-high seven blocks and seven kills, while hitting .455.

It Was Over When: After trailing 5-3 in Set 5, Penn State rallied with seven straight points to go up 10-5 and take a lead it would not relinquish. Penrose served up three aces in the rally, while Gear and Braswell teamed up on two blocks. The Nittany Lions went up six at 13-7 after a 3-0 run including a Gear solo stuff and Albrecht putaway. A service error put PSU on the hill at 14-8, but a pair of miscues kept the match going. Finally, a service error gave Penn State the 15-10 victory.