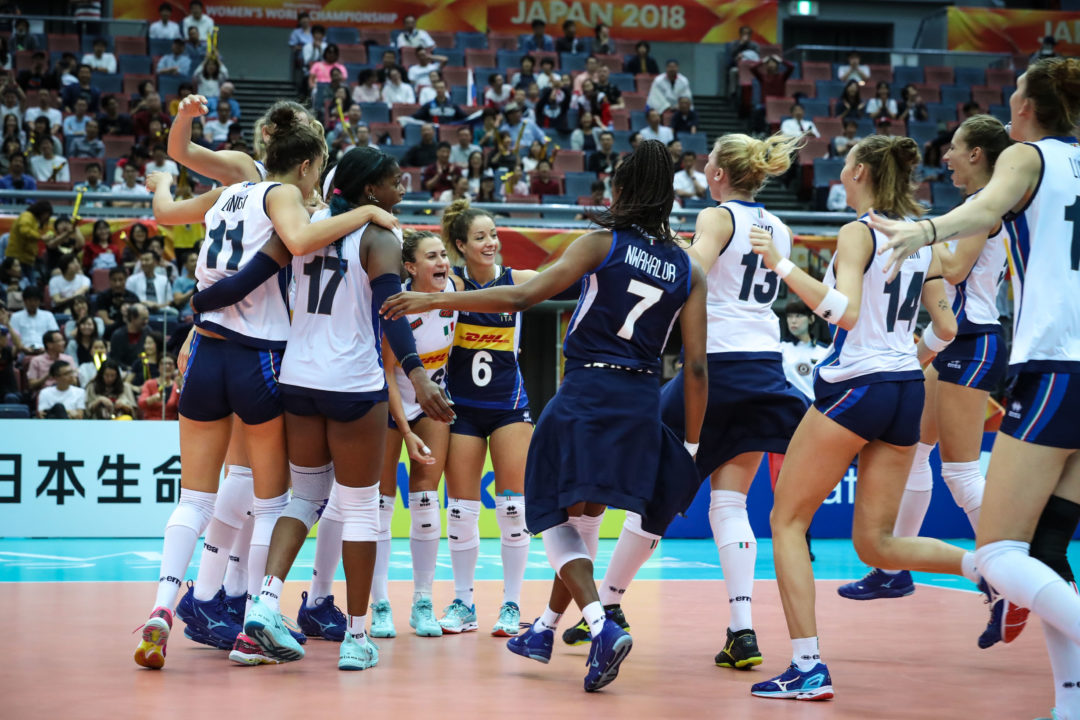 7th-ranked Italy and top-ranked China qualified for 2018 FIVB Women’s World Championship 3rd round action with victories on Wednesday night inside Osaka Municipal Central Gymnasium. The Italians remain undefeated at 8-0 with 24 points, while the Russians stand at 7-1 with 21 points. Current Photo via FIVB

12th-ranked Turkey battled its way to a 4-set victory over 24th-ranked Azerbaijan inside Osaka Municipal Central Gymnasium Wednesday night. The Turks used a strong blocking front (14 to 11) and an edge on the service line (8 to 7) to move to 4-4 with 12 points in 2018 FIVB Women’s World Championship action.

“Azerbaijan has really good attackers,” Turkey team captain Eda Erdem said. “Today, they served good and pushed us with their attacks and defense. They fought to the last point. It is important to win with three points because of the ranking and we are happy that we made it. We are looking forward to the next match tomorrow.”

Turkey was led to victory by Meryem Boz, who registered 23 points, and Meliha Ismailoglu, who tallied 13 points.

For Azerbaijan, Natalya Mammadova and Odina Aliyeva recorded 22 and 10 points, respectively in the loss.

“Of course, I am happy for the result, but I am not happy for the way we are playing,” Guidetti said. “The team is still playing under too big pressure and we cannot perform as good as we want.”

17th-ranked Bulgaria outlasted a tough 16th-ranked Thailand squad on Wednesday in Pool F action. The Bulgarians outdid the injury-ridden Thais in blocks (13 to 10) to secure the final victory.

“We are really happy that today we won, and all of the girls gave all their heart,” Bulgaria team captain Hristina Ruseva said. “This was a really important game for us and I am really happy and really proud. Thailand have incredible defense and play really good with all those combinations and good service. It was really hard and a really different type of play, so I am really happy that we took our concentration and we won today.”

Thailand has been without opposite Kokram Pimpichaya and spiker Kongyot Ajcharaporn due to injury. Pimpichaya has been out since Oct. 2 when she sustained a right knee injury against Trinadad and Tobego, while Aijcharaporn exited Thailand’s match against the United States on Oct. 3 with an ankle injury.

The Thais have been able to work Chatchu-On Moksri into the lineup to play on a limited basis as a serving specialist. The 16-year-old is coming back from an ankle injury sustained in the quarterfinal round at the Asian Games.

“It was a tough game because Bulgaria has good speed and technique compared to other European teams,” Thailand team captain Pleumjit Thinkaow said. “We could not play our way. It was unfortunate that we lost a lot of points in a row due to their strong serve. We have a limited number of players because of injuries, but in training we have been trying different positions just in case we need to cover this, so our training has been good from this aspect.”

Onuma Sittirack posted 24 points to lead Thailand, followed by Thinkaow, who contributed 18 points in the loss.

7th-ranked Italy rallied back after dropping the opening set to secure a 3-1 upset victory against 5th-ranked Russia Wednesday night. With the win, the Italians clinch a qualifying spot in the 3rd round of FIVB Women’s World Championship play as the last-remaining undefeated team in Pool F (8-0, 24 points).

“I am happy with today’s result because it means we have maintained the No. 1 ranking in the group,” Italy head coach Davide Mazzanti said. “It showed how difficult it is to stay at No. 1. At the beginning of the match our defense was not so good but gradually we improved.”

The Italians used a dominant blocking front (15 to 8) and serving edge (4 to 3) to hand Russia the loss.

Russia was led by Iraina Voronkova and Kseniia Parubets, who registered 21 and 13 points, respectively in the match.

Top-ranked China surged past the 2nd-ranked United States 3-0 on Wednesday night to secure a berth to the 2018 FIVB Women’s World Championship third round. The Chinese, who limited errors to 8, used an impressive blocking effort (9 to 3) and 3 service aces to hand the Americans their first loss of the tournament.

“It was a really important game for us and we needed to play together as a team to win,” China head coach Jenny Lang Ping said. “Every game against a top team is a challenge for us, and I told my players not to think about the result and don’t be afraid to make a mistake; just give all your effort into playing well. I can see we have been getting better through several matches.”

Jordan Larson and Michelle Bartsch-Hackley led the Americans with 14 and 9 points, respectively.

The United States can earn a bid to the 3rd round with a victory against Italy on Thursday night. If the Americans were to lose that match, they could still move on in the competition if China defeats Russia tomorrow.

“I want to congratulate China for playing a very strong volleyball match today,” United States head coach Karch Kiraly said. “They were stronger than we were in lots of phases. Our team is looking forward to a chance to get back on the court tomorrow against a very good Italy team in the next match in this group.”