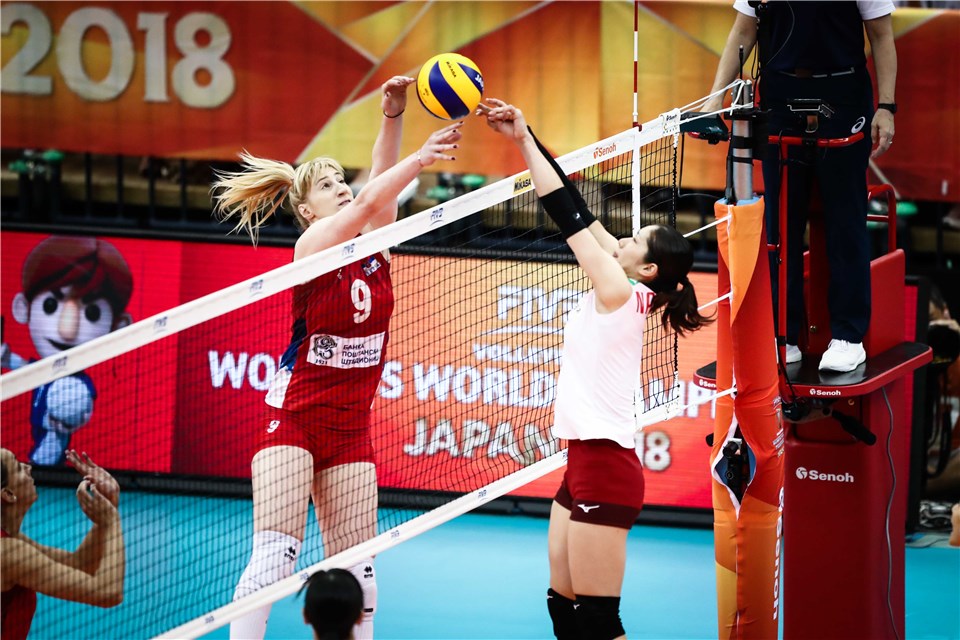 Serbia suffered its first loss of the World Championships, falling to Japan in four sets on Wednesday. Brazil handed the Netherlands its first loss as well to stay in the race for the Final Six. Current Photo via FIVB

Serbia suffered its first loss of the World Championships, falling to Japan in four sets on Wednesday. Brazil handed the Netherlands its first loss as well to stay in the race for the Final Six, while Germany and the Dominican Republic added a win to their tallies.

Serbia had already clinched its spot in the third round, but left the door open for Japan and Netherlands to grab first place in the pool with the loss.

The other two places in the third round are still up for grabs with just three points separating Japan, the Netherlands and Brazil.

“This was a solid win for the Dominican Republic,” Mexico coach Ricardo Naranjo said. “We could not play our volleyball at all today. It was a lack of preparation for the match. I think fatigue has built up among the players. We will prepare them physically and mentally for tomorrow’s match with Puerto Rico.”

Andrea Rangel was the top scorer in the match with 14 points for Mexico, all on kills. Samantha Bricio (9) and Melanie Quintero (8) followed, chipping in eight and seven kills respectively to go with an ace apiece.

Mexico was never able to overcome an 8-2 deficit in Set 2. After cutting the margin to three at 8-5, the Mexicans succumbed 25-18 with the final point coming on a Martinez stuff.

Set 3 was closer with the DR lead standing at just three at 15-12, but the team wrapped up the match on a 10-3 run capped by a Gina Mambru ace.

“I was a pleasant win for us today,” De La Cruz said. “We play them a few times each year, so we know them well. We were able to dominate the match.”

“We knew it would be a tough game,” Brazilian captain Natalie Pereira said. “It is their first loss of the tournament. We were not good in the first set. Our defense and block improved after that. We came in with the right mind today. Tomorrow will be a tough game against Japan. This was our best match of the tournament. We did what the coach said. It was an important victory.”

Both teams went deep into their benches, utilizing 12 players in the five-set affair. In the end, a 16-5 blocking advantage was key in lifting the Brazilians to victory. Brazil also boasted a slight edge in kills (56-54) and aces (10-8).

Tandara Caixeta led all hitters with 28 points, turning in six or more scores in each of the first four sets. After starting the first two sets, Drussyla Costa gave way to Fernanda Rodrigues in Set 3, while Ade exited for Carol in Set 5. Fe Garay ended the match with 13 points, including a team-best four in the decisive fifth set. Gabi Guimaraes (13) and Ana Beatriz Correa (10) also turned in double-digit points. Caixeta notched 22 kills, three blocks and three aces, while Guimaraes and Rodrigues tallied 12 and 10 kills respectively.

The Dutch went up 4-0 in the opening set and staved off the Brazilians down the stretch for a 25-21 win.

After playing to a 15-all tie in Set 4, Brazil took control and sent the match to tiebreak with a final 10-4 run.

“Brazil is one of the best teams in the world,” Netherlands coach Jamie Morrison said. “I was happy with the first set and with the heart we showed in the third set, but disappointed in the result. We push Brazil every time we play and I hope someday we can beat them. We look forward to playing Serbia tomorrow. This is a tough pool.”

“We are really happy to get the three points,” German captain Maren Fromm said. “It is hard to play against a defensive team. We came back in the third set and that made the difference.”

Puerto Rico seized control of Set 3 midway through with an 8-3 run which pushed the team in front 16-11. Despite struggles on defense, Germany managed to rally for a 23-22 lead. An ace by Santana gave Puerto Rico a 24-23 lead, but the Germans came through with a 29-27 victory on a Lippman putdown.

Germany seized an 8-5 lead in Set 4 and held on for the 25-22 victory. Puerto Rico was within one late at 21-20, before Vanjak and Lippmann ended the night.

“It is a bittersweet feeling,” Puerto Rican captain Natalia Valentin said. “We have been looking for rhythm in this tournament and we finally found it today. The bad calls from the referees were unfortunate. It was frustrating. Germany did a good job and found their game.

Serbia opted to rest Tijana Boskovic after the 25-15 Set 1 win, before dropping its first sets of the World Championships.

Miyu Nagaoka (19), Sarina Koga (19) and Yuki Ishii (14) paced the Japanese attack with double-digit scoring efforts. Nagaoka downed a match-high 19 kills, while Koga added 15 putaways and four blocks. Ishii chipped in 12 kills, a block and an ace after coming in as a substitute in Set 1.

With Boskovic on the bench, Serbia struggled to put the ball away, due in part to Japan’s strong backcourt defense. The Serbs also committed seven errors in Set 2.

Japan went up 16-12 and held on despite Serbia working its way back to a tie at 19 and 23. Nagoaka tooled the block to claim the 25-23 win and give Serbia its first set loss of the tournament.

The teams were tied at 19 all in Set 3, before Koga came through with two key kills to clinch the 25-23 victory.

Serbia boasted a 15-11 lead in Set 4, but Japan rallied to tie it at 18. An Ishii kill gave Japan a match-point try at 24-23. She then tooled the block to give the Japanese the upset win.