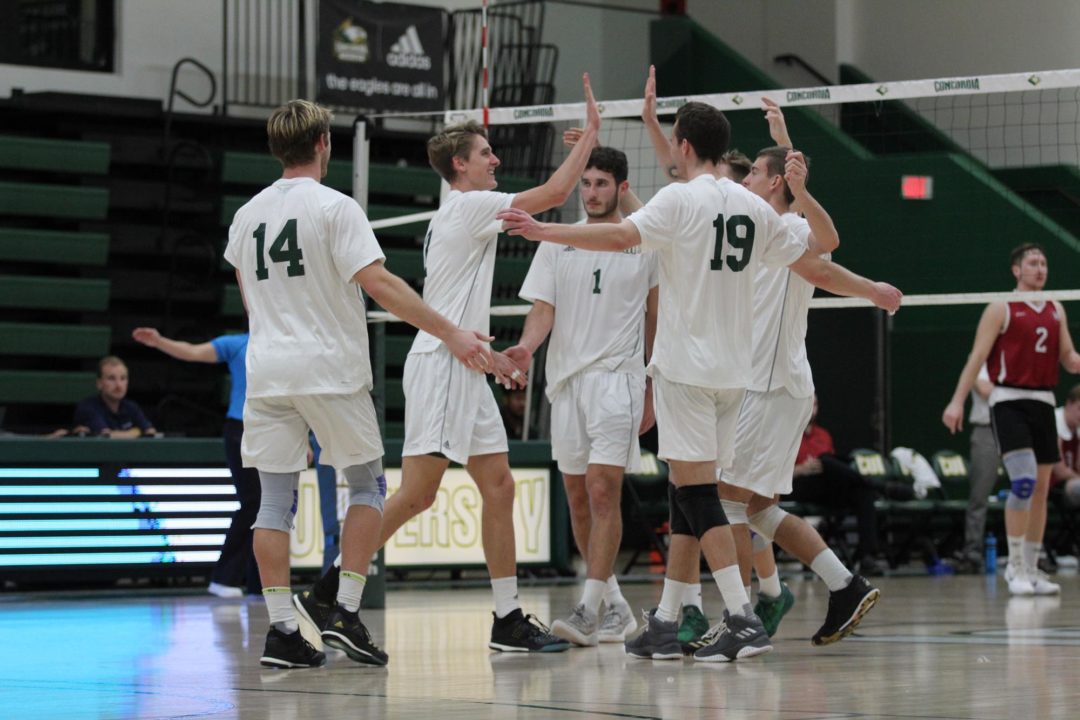 Sacred Heart bested No. 20 Saint Francis; Stanford knocked off No. 12 Grand Canyon in five sets; No. 18 McKendree toppled No. 9 Lewis; No. 16 Concordia Irvine edged past No. 2 BYU in five sets; and No. 8 Ohio State posted a four-set win over No. 6 Loyola to highlight Thursday's slate of upsets. Current Photo via Concordia-Irvine Athletics

Sacred Heart bested No. 20 Saint Francis; Stanford knocked off No. 12 Grand Canyon in five sets; No. 18 McKendree toppled No. 9 Lewis; No. 16 Concordia Irvine edged past No. 2 BYU in five sets; and No. 8 Ohio State posted a four-set win over No. 6 Loyola to highlight Thursday’s slate of upsets.

Only No. 6 Pepperdine was able to hold rank, sweeping USC.

Key Statistics: Concordia Irvine hit .328 and racked up six aces and 9.5 blocks in the five-set victory, which snapped BYU’s 13 match win streak. The Cougars outhit the Eagles .357 to .328, but were outdone .250 to .188 in the final stanza. BYU also boasted a 12-9.5 lead in blocks. Both teams managed 62 kills and six aces. The Cougars hit .300 or better in the first four sets, including a .483 effort in Set 2, but couldn’t keep pace in the final stanza. Concordia started slow, but hit .462, .625 and .250 in the three-set comeback. BYU played without sophomore outside Storm Fa’agata Tufuga, who participated in the team’s last match (March 15) and senior middle blocker Price Jarman, who has been out since Feb. 24.

Senior outside Brendan Sander downed a match-high 24 kills and hit .455, while adding four aces and four blocks, but it was not enough for BYU. Sophomore outside Cyrus Fa’alogo added 15 kills and eight digs, while hitting .414. Freshman opposite Gabi Garci Fernandez posted 13 kills and four blocks, while junior middle Christian Rupert put up a team-best six blocks.

It Was Over When: Concordia Irvine jumped out to a 3-1 lead in Set 5, including a Predney kill and Barsemian ace. BYU scored five straight with help from two Sander kills and two blocks to put the Cougars up 6-3. BYU led 8-5 at the changeover, but the Eagles fought back to a 10-all tie with kills by three different players, a Predney ace and a stuff by Gibb and Howell. Later, a Howell putaway and a block by Gibb and Falduti put Concordia on top 13-12, prompting a Cougar timeout. BYU tied it up at 13 and 14, but a service error and a Predney putdown capped the upset for the Eagles at 16-14.

Key Statistics: McKendree picked up the road win despite being outdone by Lewis in hitting efficiency (.266 to .248), aces (6-2) and blocks (16.5 to 9). The Bearcats boasted a 66-59 advantage in kills. Miscues spelled the difference with the Flyers posting three more service errors (16-13) and four more blocking errors (7-3).

It Was Over When: After playing to a 13-all tie in Set 4, the Bearcats put together a 6-1 run, including two Lewis miscues and a kill and a block by both Wilcox and Schmidt. The Flyers chipped away at the 19-14 margin, eventually knotting the score at 23. Three kills and a block by Murray and a pair of Coenen putaways aided the Lewis comeback effort. Wilcox came through with back to back kills in the end to seal the 25-23 win and the match.

Key Statistics: The Buckeyes poured on 20 more kills (69-49) and hit at a .353 clip in a four-set win over Loyola to tie the Ramblers atop the MIVA rankings. Ohio State also had help from a 5-1 lead in aces in the win, which saw the team miss out on eight match-point tries in Set 3 before falling 41-39. Loyola boasted a 10-9 advantage in blocks. OSU hit nearly .400 in every set, save a .291 effort in Set 3, en route to its seventh straight victory. The Ramblers managed to hit at a .300 or better clip in Set 1 and 3.

It Was Over When: The teams played to an 8-all tie in Set 4 before OSU surged ahead by three at 14-11. Two service errors and a pair of kills by Gevis gave the Buckeyes the advantage. Szerszen downed two kills and Leeson added a third to make it 18-13 Ohio State. A hitting error and service error and a triple block cut the margin to two at 18-16, but the Ramblers would get no closer. OSU scored seven of the final 10 points, with kills by four different players. A Hanes ace wrapped up the stanza.

Key Statistics: Pepperdine won every statistical category except blocks in the sweep. The Waves outhit the Trojans .315 to .292, outserved them 7-5 and racked up 11 more kills (49-38). USC boasted a slight 5-4.5 lead in blocks.

It Was Over When: USC led by as many as five in Set 3, boasting a 13-8 advantage with help from two blocks and five Wave miscues. Pepperdine chipped away, eventually tying the score at 16. Harthaller downed four kills in the stretch, while Wieczorek chipped in a kill and an ace. Down 17-16, the Waves scored five of the next six to surge ahead 21-18. The Trojans trailed by just one at 23-22, but a Harthaller kill and Jon Rivera service error gave the home side the 25-23 win and the match.

It Was Over When: Sacred Heart built a six-point lead midway through the set at 16-10 thanks to a 5-1 run including three Red Flash errors and a solo stuff by Chatterton. Saint Francis narrowed the gap to one at 19-18 as Thompson turned in a kill and two aces and Roman Szwabinsky posted a kill and an ace. Up just one at 21-20, the Pioneers made a final push, scoring four of the final five. Putaways by Tischler and Karlsson set up the final point, which came on a bad set by Keith Kegerreis.

It Was Over When: Set 5 featured 14 ties, but also saw the Cardinal boast an 8-4 lead early thanks to four Jasper putaways. GCU tied it up at 8 with help from two Shalev Saada kills, but Stanford surged ahead 12-9 as Jasper downed two more kills. Facing match-point at 14-12, the Lopes scored three straight, including a solo stuff by Blazer to earn a try of their own at 15-14. Grand Canyon would have two more opportunities to close it out, last at 17-16. Stanford had four cracks at the match, beginning at 18-17 as the teams traded points. A Melcher putaway knotted the score at 21, setting the stage for Jasper and Rakestraw to steal away the win for the Cardinal at 23-21.