Serbia Takes Down Iran With Top of Pool D1 in Mind 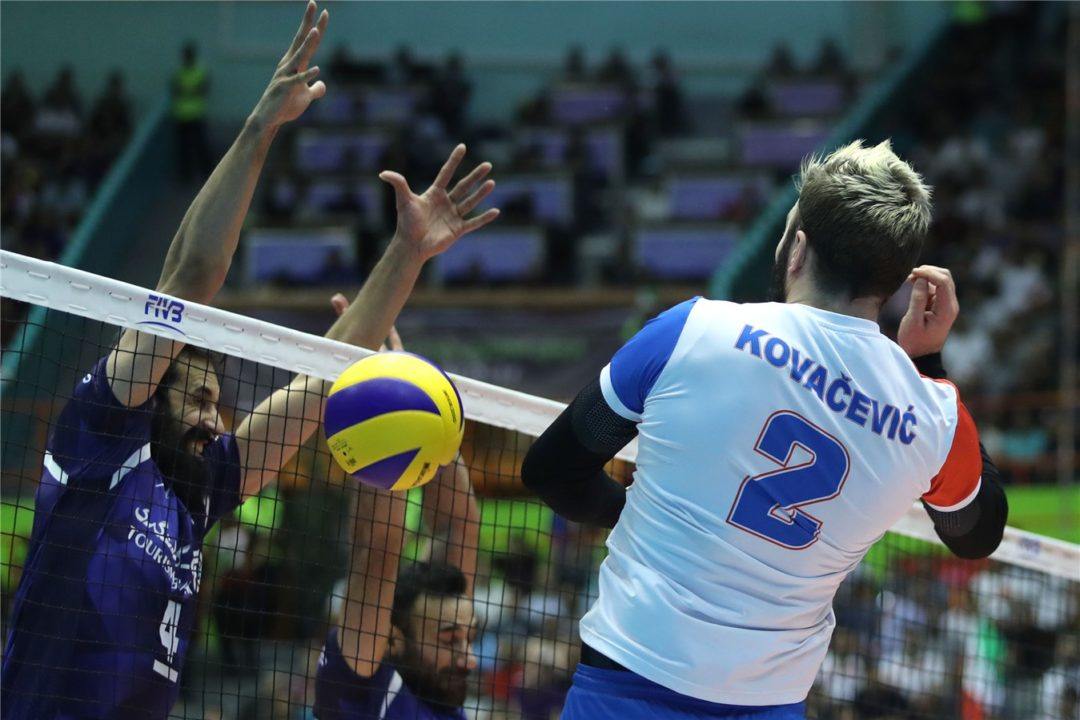 Serbia and Belgium both nabbed victories over Iran and Argentina, respectively in Pool D1 today. Current Photo via FIVB

After an avenging win over Argentina yesterday, the Serbian’s followed it up with a four-set victory over Iran. The match gave both countries a chance at first in the Pool D1 standings, but only Serbia was able to seize it as they improved to 4-1 overall and 2-0 in Pool D1. Serbia has also been able to maximize, as they did today, the full amount of 12 points in the four wins as all have come in four sets or less.

For Iran, the loss comes after being on the right side of a five-set match with Belgium yesterday, but because Belgium won in five over Argentina, Iran dropped to third in the standings – a point behind Belgium. Winless Argentina is in fourth in the pool.

The defending FIVB World League champion Serbia had a six-match winning streak last year in the tournament until they faced a five-set loss to Iran. Serbia got some revenge in this one, winning in four sets.

Serbia was already at a disadvantage to start the match vs. Iran as 12,000 home fans in Tehran filled the Azadi Indoor Stadium. However, it was Serbia who jumped out to the early advantage with a 25-20 first set victory. The second set was tied at 18, but Serbia would take four of the next six for a 22-20 lead that carried until 25-23 for a 2-0 set upper-hand.

With their backs to the ropes, Iran used the energy of the home crowd to bounce ahead 12-6. Iran never looked back as Milad Ebadipour Ghara H., who had nine points, finished off the third 25-16 with a solo block.

Belgium responded from the third set loss with an 8-2 start in the fourth. Eventually that inflated out to 16-8 and a 25-16 set win. Uros Kovacevic and Marko Podrascanin combined for 34 points as Belgium took the match in four for the maximum three points.

Amir Ghafour had a team-high 13 points for Iran, who out-blocked Serbia 10-8. However, Serbia was the better offensive unit collecting 56 spikes to Iran’s 40.

Iran sits with two points through two matches in Pool D1 and is 2-3 overall. They’ve totaled five points as they sit in the bottom half of the standings, but not too far away to be eliminated from the Final Six.

For Serbia, the win has them in the top three overall of Group 1. Next up, they get Belgium as Serbia looks to reconcile their only loss of the 2017 World League. Belgium won that match last weekend in three sets.

Belgium and Argentina both came into the match looking for their first win in Pool D1. While Argentina came up on the short end of the stick, they came away with a point for losing in five.

At first, Argentina looked to be in solid position to pick up more than just that one point. Behind a quartet who finished with double-digit points, Argentina took set one 25-23. Belgium responded up 16-13 in the second, but a couple of spikes from Santiago Darraidou, who finished with a match-high 23 points, evened the set at 18. Belgium would explode from there as they scored seven of the final nine to even the match at 1-1.

Belgium again had a slight edge midway through the third, up 18-14. Again Argentina showed resolve in tightening the lead to just one, but Belgium pulled through 25-23 at the end. Trailing 2-1, Argentina had to win set four. It came down to crunch time at 23-23 before Argentina took three of four to even the match at 2-2.

Heading into set five, Argentina might have felt nostalgia after winning a five-setter with Belgium in the 2015 World League. Belgium quickly dispelled any thought of dropping another five set match as they did yesterday vs. Iran. They jumped out 8-4 and blitzed Argentina for a 15-6 final set win.

Sam Deroo led Belgium with 19 points while Tomas Rousseaux collected 17. In total, Belgium had five athletes in double-figures for points, but overall it was Argentina who put down more spikes. Belgium countered as the better blocking team in the match with 15 to Argentina’s 11. Seven of the 15 came from Simon Van De Voorde, who finished with 12 points.

For Belgium they now have collected three points in two matches this week with a win and loss in five sets. When you add that on to a 2-1 first weekend, they currently rank fourth in the overall Group 1 table. Tomorrow they look to repeat their prior performance against Serbia, who’s directly in front in third.

Things aren’t as hopeful for Argentina, who have conjured up just three total points with one in two matches this week. They’re in 12th of the 12 teams in Group 1.