U.S. Men Yet to Concede Set in Pool F1 After Sweep of Russia 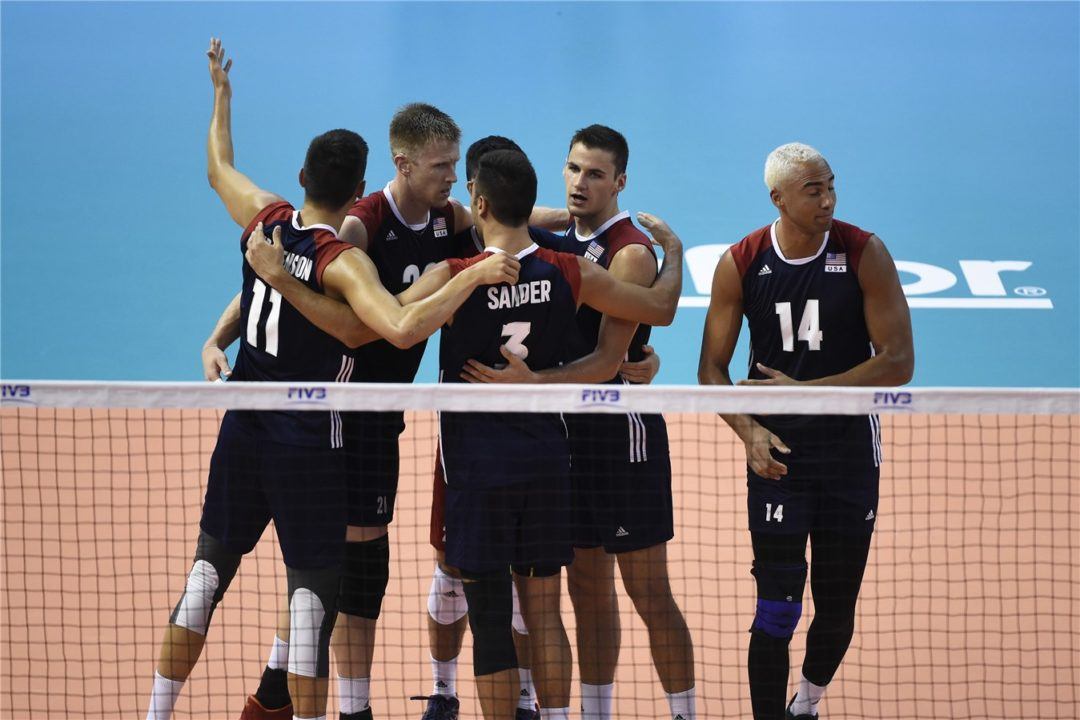 After falling to 0-3 last weekend, the U.S. Men's National Team has picked things up with sweeps over Italy and now Russia in Pool F1. Current Photo via FIVB

The U.S. Men’s National Team recorded their second straight win, both in sweeps, as they took down Russia today. Even after a winless week one, after the U.S. earned a maximum of six points the last two days, they currently sit in position for the Final Six in a few weeks. Russia on the other hand is now in a tough spot.

The other Pool F1 match saw France fall behind early but come back in front of a home crowd to remain undefeated. The win keeps France atop the Group 1 table and pushes Italy into a similar position with Russia at 1-4.

The United States Men’s National Team kept the good times rolling as they took down Russia in three sets; 25-20, 25-22, 25-22. After dropping all three matches in the opening week, the U.S. have things turned around as they not only swept Russia today, but also won all three sets against Italy in yesterday’s match.

In what was a rematch of the 2016 Olympic Bronze medal match, the United States got things started off on the right foot taking the first set 25-20. Already, the United States was in a better place than that 2016 match when they came back from down 0-2 for a five-set victory. Just as Ben Patch starred against Italy yesterday, Patch tied for a match-best 15 points in this go around. Joining that 15-point club was Taylor Sander for the U.S.. The combination mixed for nine of the United States’ 25 points in that first set.

USA led off the second set scoring the first five points. Although Russia would climb a few points closer, they were never able to recover as they fell 25-22 to face a 2-0 set deficit. Again the U.S. jumped ahead early in the third, leading 16-11. At one point, Dmitry Volkov had three straight points for Russia as they pulled within four at 21-17. The U.S. closed out the third though with a final count of 25-22 for the sweep. Although Russia outblocked the U.S. 8-6, the United States provided a boatload more of offense with 48 spikes to Russia’s 26.

For the Russians, Maxim Zhigalov along with Volkov tied for the team-lead with 10 points each. The loss stings for Russia, who now sit at 1-4 in World League play. In total, they’ve lost four in a row.

The United States began the week in 12th of 12 teams after the 0-3 start. They did salvage one point from the weekend though and with two three-set wins this week they now boast a total of seven points, which puts them back in contention for the Final Six, which they currently would be a part of. Beyond that, the victory represents number 150 for the U.S. in FIVB World League history. They’ll look for 151 tomorrow as they’ll face France with a chance to be crowned the Pool F1 champs, which can bring in a nice sum of money.

France played host to a 2016 FIVB World League third-place game rematch against Italy. The 2016 version saw France win in three sets, but Italy would not falter as quickly again.

This time, the Italians stormed out of the gate, winning set one 25-21. It was a close set throughout, but Iacopo Botto, who ended with a team-best 15 points, put the final point down in the first.

In set two, Italy snagged four of the first seven, but France countered with six unanswered. France would spread out to a six-point advantage at 21-15 before Italy took six of the next nine. However, the run was too little too late, as an Italian serve error gave France the set 25-21.

With the third underway in a 1-1 match, points went back-and-forth until France broke the pattern at 13-12. France would gain some breathing room over the next handful of points, as they pushed that lead to 19-15. Again, an Italian mistake would end the set, as this time a foot fault gave France the 25-21 set victory.

With France leading 2-1, the set four was a dandy. France worked its way to a 24-21 set and match point. Giulio Sabbi, who totaled 10 points, kept Italy alive on the next point. Sabbi then blocked the next two French shots to even the set up at 24. A timeout from the French side helped to calm them down and 21-year old Stephen Boyer took over from there. Boyer, who finished with 20 points to move himself into second in Group 1 scoring, soared from the right side for a line drive spike into the Italian half. The next point went into a French triple block that featured Julien Lyneel (14 points) and Nicolas Le Goff (10 points) – who got the majority of the ball.

In addition to Botto, Italy was led by Luca Vettori and Oleg Antonov‘s 13 points each as Italy out-spiked France 57-51 in addition to out-blocking France 11-9. The advantage that France held was a 6-4 ace margin in addition to Italy recording 12 more attacking errors.

With a 1-4 record, this marks the first time that Italy has surrendered four of their first five World League matches. Tomorrow will make for an intriguing match as they face struggling Russia with the winner gaining their second and the loser dropping a fifth match.

Similar to the United States, who they will play tomorrow, France recently hit win number 150. Today’s match was number 151, just a tally ahead of the United States’ mark. The winner of that match tomorrow will win Pool F1 and come out of the three matches this weekend unscathed.