Serbia Wins Pool D1 by Avenging Only Loss to Belgium 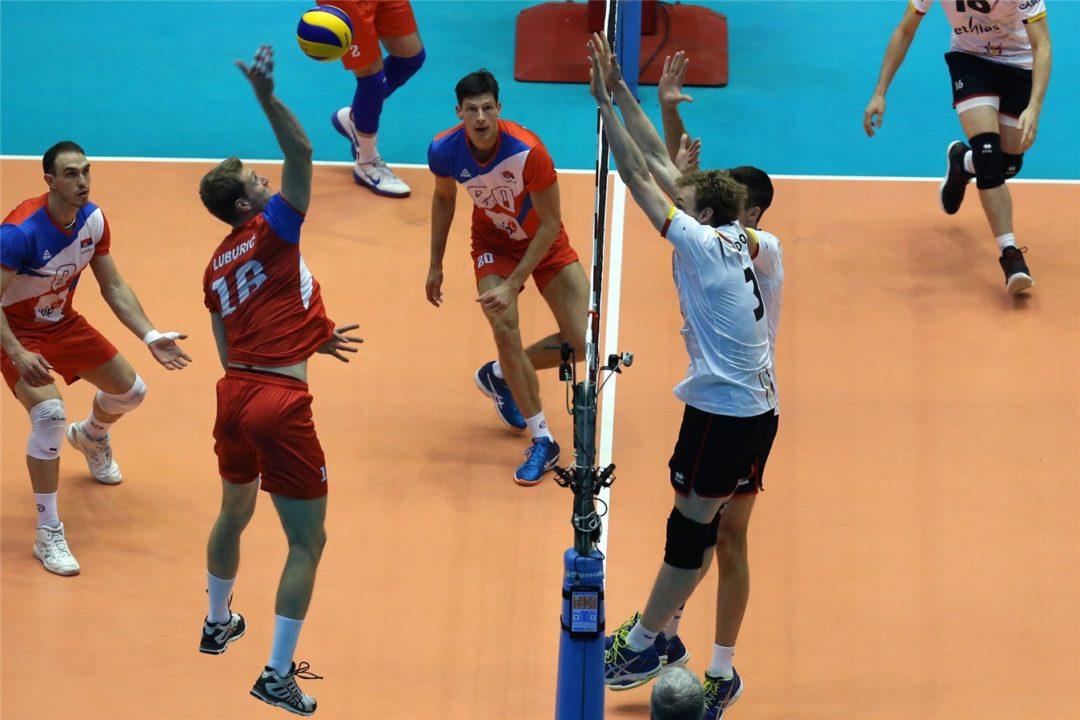 Serbia found revenge as they took down Belgium to win Pool D1. Current Photo via FIVB

Although Belgium was three points behind Serbia entering the day in Pool D1, both of the teams sat in the top four of the overall Group 1 table. For Serbia, they avenged their only loss of World League in the same fashion they lost – a sweep. The win also moves them into second overall after Brazil was upset. Although Belgium went just 1-2 in Pool D1, they still sit in fourth of the overall standings.

Iran on the other hand needed five sets – as they did in their prior Pool D1 win – to dispatch of Argentina. The host team had a successful weekend as they now sit right in the thick of the playoff race.

Coming into the match, Serbia had just one blemish on it’s 2017 FIVB World League slate: a three-set loss against Belgium. From that point, Serbia has yet to lose a match and has been rolling. They kept up their hot streak and got revenge in the process with a three-set sweep.

It was Serbia slightly ahead through a big part of the first set, which held until the end as Serbia finished the set with one of seven aces on the day at 25-22. They used that momentum to charge out of the gate in the second, leading 13-6. The lead extended out to as much as nine and Belgium would eventually end the set winning 25-18.

Belgium enjoyed a fresh start in the third, as instead of constantly playing from behind, the set was tied 17-17. A kill and an ace by Drazen Luburic, who had a match-high 19 points, halted the back-and-forth point-giving as it finally allowed for a two-point edge in the set for Serbia. Then, Serbia would take five of the next eight for a chance at match point. A block by Srecko Lisinac – one of his two for a total of 10 points – and Nikola Jovovic ended the match in favor of a Serbian sweep. For Jovovic, the block was his only point in the match.

Serbia out-spiked Belgium 46-29. They also only allowed one Belgian ace and covered for 24 digs in the match as they held down Bram Van Den Dries to just 10 points.

“I am very satisfied obviously, not only because of the victory we deserved, but it was the third win in a row,” Serbian head coach Nikola Grbic told FIVB. “We played late yesterday and there were things that could have given us some problem for this match. But I saw my guys so concentrated and they really wanted this victory. We lost against Belgium in Serbia and we really wanted to win today. So, it is not only important for the result, and for the qualification for the Final Six, but it is also important for our confidence. We prevailed over a team who beat us 3-0 in our home.”

Belgium will join Pool I1 in the final week, in what will feature a tough final three matches of Canada (who gave Belgium a five set loss in week one), Italy and France. They’ve done solid work so far, as although they went just 1-2 and finished third in Pool D1, still are in fourth overall with 10 points in Group 1. They have as many wins this year already as they did last year, but it might be difficult to garner another with that upcoming schedule.

Next week Serbia will try to win Pool G1 as they did with D1. The pool which will feature Argentina (who they defeated in three sets this week), Bulgaria and Brazil. Regardless of how they do, there is a good chance Serbia will find its way into The Final Six as with 15 points at the moment they’re just barely missing out on officially clinching.

In the 2016 Olympics, Argentina swept Iran 3-0 in the pool stage. However, that same year, Iran won both matches in five sets over Argentina at World League. This go around, behind the sound of the vuvuzela, host-Iran was able to overcome Argentina in five-sets.

It was Argentina striking early, leading 15-11 in the first set. Iran took a slight advantage over the next 14 points, winning eight as they still trailed 21-19. A dump shot by setter Mir Saeid Marouflakrani brought Iran within a point. The very next point, Iran aced Argentina to draw even at 21. As points exchanged, set point was brought to Argentina at 24-23. Mohammadjavad Manavinezhad, who collected a match-high 26 points, responded for Iran with a kill after stingy defense by Iran to keep a few possessions alive. Manavinezhad would tie the set again, this time at 25. Iran worked it’s way in front with the next point, but couldn’t finish off Argentina until it was 28-27 when they won a rally with the final blow coming from Adel Gholami, who had seven points.

Iran held strong throughout the second and pulled away toward the end. Once again it was Gholami with the set’s final point, as he struck out of the middle to win it 25-20. With Iran leading two sets to none, set three was even halfway through at 12-12. Argentina showed some life winning 12 of the next 20 for a set point chance. Pablo Crer put down one of his 19 points for Argentina as the ball went down the left line for the set win.

Iran looked strong in set four early, leading 14-11. However, Argentina again showed fight by winning eight of 10 for a 19-16 edge. Iran would close the gap as the rest of the set tinkered between being a one and two point Argentina lead. Eventually it ended 25-23 as Crer put the last kill down to force the winner-take all fifth and secure Argentina at least a point from the match.

The fifth was close, but it felt as if Iran was a slight step ahead throughout. At 14-11, Farhad Ghaemi sent one off the Argentinian block into the crowd to end the match.

Argentina now sits in a tough spot in 12th of 12 teams with four total points. They’re not too far out behind teams in front of them, including Italy who also has four. If Argentina were to get two wins in Pool G1 between Serbia, Brazil and Bulgaria, they’d have a shot at The Final Six. But more likely based on how they’ve played, Argentina will be looking to scrape together points to avoid relegation.

Iran on the other hand vaulted up in the standings with the 2-1 week. They’re 3-3 overall and with seven points sit in 8th. However, they’re only a point back of sixth. It’ll be a big week for Iran as they will be challenged by the U.S. (also with seven points), Russia (right behind with six) and Poland (in fifth with 10) – all competitive matches that feature teams in the middle of the playoff race.